CBS Softball to McCain: ‘Do You Worry’ Trump Is ‘Not Fit for the Office?’

60 Minutes journalist Lesley Stahl on Sunday offered a softball interview with John McCain, pressing the GOP senator who often votes against his own party as to whether it was Donald Trump has “has initiated divorce proceedings with Republicans.”

Additionally, after hyping McCain quotes that Trump is often “poorly informed,” Stahl prompted the Senator: “Do you worry that he's not fit for the office?” The CBS correspondent introduced McCain’s repeated efforts against repealing ObamaCare this way:

On Friday, John McCain announced that he will once again vote against repeal of the Affordable Care Act, once again disappointing his fellow Republicans and President Trump.... And so, the Senator from Arizona has lived up to his reputation as a maverick and a fighter.

Yet, when Stahl highlighted Trump’s flip flops on DACA, the journalist wondered, “Do you think he has initiated divorce proceedings with Republicans?” One might have thought such a question should be posed of McCain. 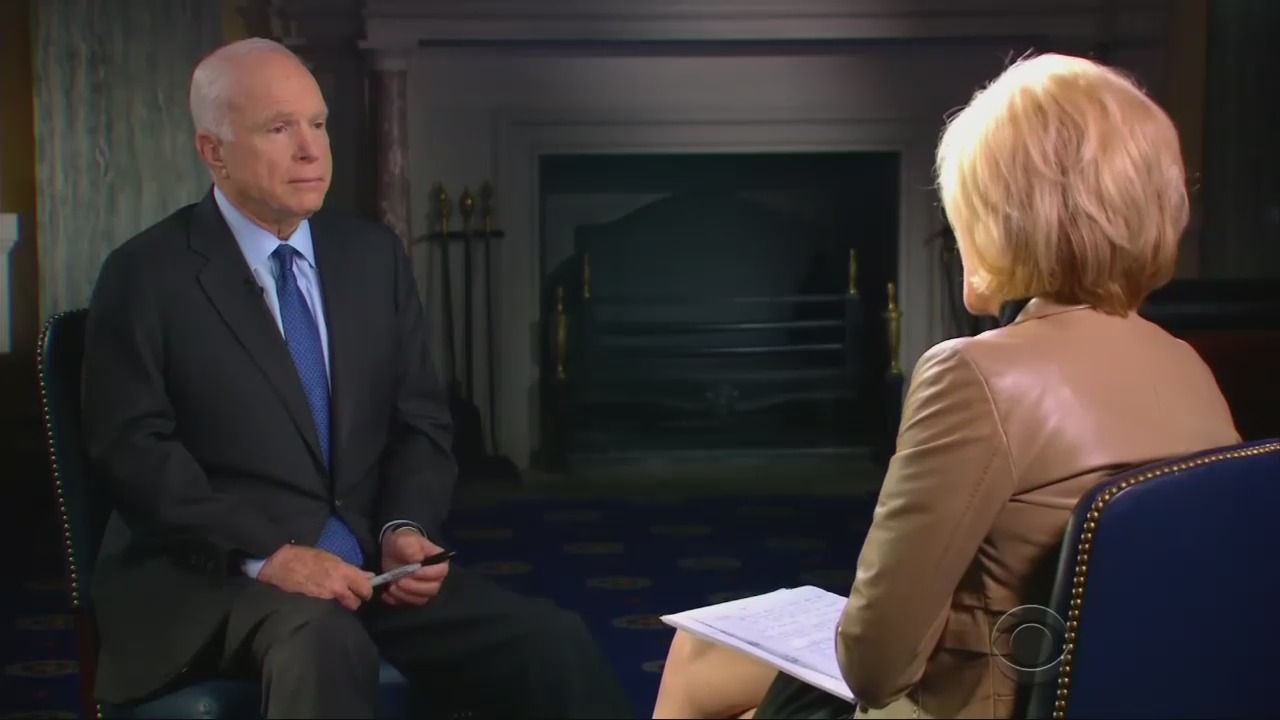 LESLEY STAHL:  On Friday, John McCain announced that he will once again vote against repeal of the Affordable Care Act, once again disappointing his fellow Republicans and President Trump. In a statement he said:" I believe we could do better working together, Republicans and Democrats, and have not yet really tried. Nor could I support it without knowing how many people will be helped or hurt by it." And so, the Senator from Arizona has lived up to his reputation as a maverick and a fighter. McCain, who survived torture and solitary confinement during his five and a half years as a P.O.W. In Vietnam, is now, at 81, in a second fight for his life.

STAHL: Just 11 days after his surgery, he returned to Washington against doctors' advice, for the vote to repeal ObamaCare. You walk out onto the senate floor. You thought it was going to be normal, empty, mostly empty. And the entire Senate is there. They stand up. They give you an incredible ovation. What went on inside?

JOHN MCCAIN: Oh, I got very choked up. And then, of course, you know, all of them coming over and giving me a hug. It was deeply moving. I had never seen anything like that.

STAHL: So, you get all this affection, and then you give them this speech, was kind of scolding to the people who just stood up and loved you. This was a speech condemning the way the Senate has been operating.

STAHL: There are some people who think that part of your "no" was to get back at the president and that the "thumbs down" was kind of more like a middle finger to him.

MCCAIN: If I took offense at everybody who has said something about me or disparaged me or something like that. Life is too short. You've got to move on. And on an issue of this importance to the nation, for me to worry about a personal relationship, then I'm not doing my job.

STAHL: But the fact is, his personal relationship with the President has been fraught. Just last month, he wrote an op-ed saying the President is, quote, "often poorly informed" and "can be impulsive." Do you worry that he's not fit for the office?

STAHL: Let's talk for a minute about DACA, the Dreamers Act. Donald Trump, the president, a Republican, has embraced Nancy Pelosi. You go out and watch Republican campaign ads around the country. She's the target.

STAHL: Do you think he has initiated divorce proceedings with Republicans?