In case you're wondering, Rosie O’Donnell is still unhinged by Donald Trump. The liberal celebrity tweeted an error-filled, all-caps blast about the President and what would happen if he is forced out of office. In a disturbing follow-up, she hinted that violence was need to make it all happen, saying, “Desperate times - desperate measures.” 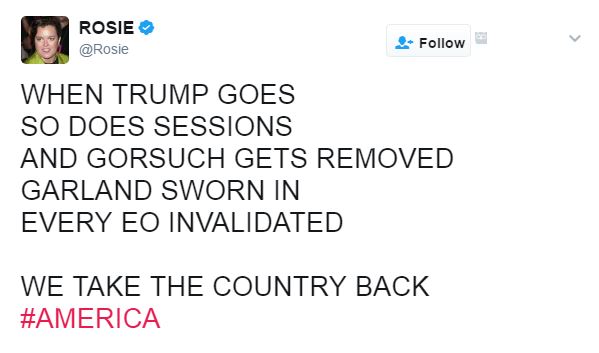 O’Donnell seethed, “WHEN TRUMP GOES, SO DOES SESSIONS. AND GORSUCH GETS REMOVED. GARLAND SWORN IN. EVERY EO INVALIDATED.” Actually, none of that is true.

It shouldn’t need to be explained, but were Trump to leave office, voluntarily or not, Gorsuch would stay. Garland would not be on the Court.

In a follow-up, someone tried to correct the entertainer and wondered how she would force out a sitting Supreme Court judge. “You have an Army ready?”  O’Donnell hinted at armed insurrection against the United States, “No I do not. We have never had this kind of treasonous madness in power before. Desperate times - desperate measures.” 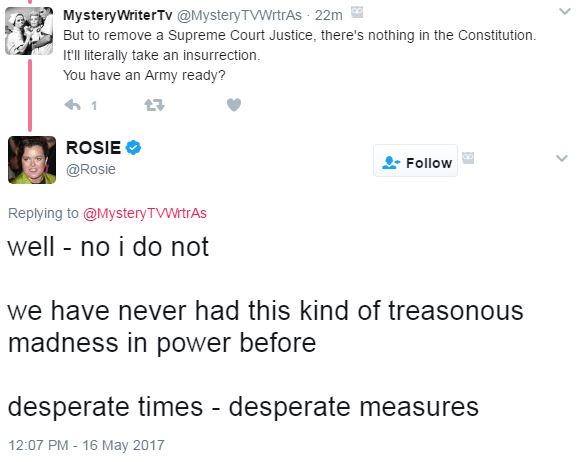 This is the same woman who, in January of 2017, tweeted that there were “less than 3 weeks to stop” Trump from becoming President.