Director Joss Whedon seems to really hate major sections of this country. The filmmaker behind two Avengers films, movies that Americans made into blockbusters, decided to mock an Easter Sunday message from Senator Tom Cotton. The Republican tweeted, “Happy Easter to all! He is risen. He is risen indeed!”

This prompted Whedon to tweet this bizarre, hateful message: “*jesus rises* *tom straight up poops himself* Jesus: Mr Cotton. TC: I have pooped atop the poop I just pooped.” Can you imagine the liberal director being that disrespectful to people of other faiths? 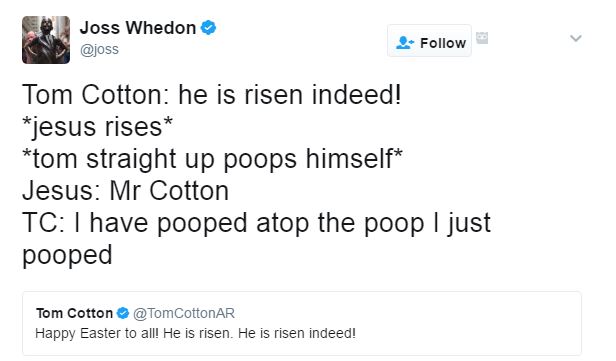 This is the same director who speculated in April that Donald Trump might start killing gay people.

In March, he mocked Trump voters as “uncaring and obnoxious.” In January, Whedon appeared to call Ivanka Trump a dog. The director later asserted he had been misunderstood.

In mid-November, AFTER the election, Whedon said that “Trump cannot be allowed” to take office.

The celebrity'sTwitter bio says, “I never let them see the worst of me.” Given the things he tweets, that seems hard to believe.