You know it’s bad when even the liberal Stephen Colbert is mocking Rachel Maddow’s non-scoop about Donald Trump’s taxes. The Late Show host on Wednesday devoted two segments to skewering Maddow’s hype-fest on the President’s 2005 taxes. After noting how the MSNBC host pushed the story on Twitter prior to her show, Colbert joked, “Rachel took us on an emotional roller coaster. Because, like a roller coaster, at the end you are right back where you started and feeling a little queasy.”

The comic played a clip of Maddow’s 20 minute-long build up to the tax documents and scolded, “She’s got nothing!” After showing video of the liberal journalist explaining that Trump payed $38 million in taxes, Colbert blasted, “$38 million.... All right, $150 million income. That adds up to zero [bleep] being given!”

He dismissed Maddow, slamming, “Be sure to tune in to Rachel's next special report, ‘Wolf! Wolf! An exclusive look at what the boy cried.’"

As if this wasn’t enough, Colbert offered another segment devoted to mocking Maddow. With a backdrop similar to the MSNBC show, the comedian offered an extended, rambling monologue, just like Maddow.

Making the salient point about the non-scoop, he even skipped the punch line:

STEPHEN COLBERT: It ought to give you pause that after all of this buildup, I still haven't gotten to the punch line. So without further ado, "Why did the chicken cross the road?" The answer right after this break. 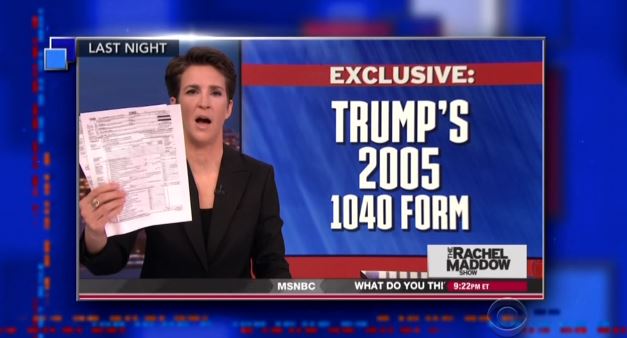 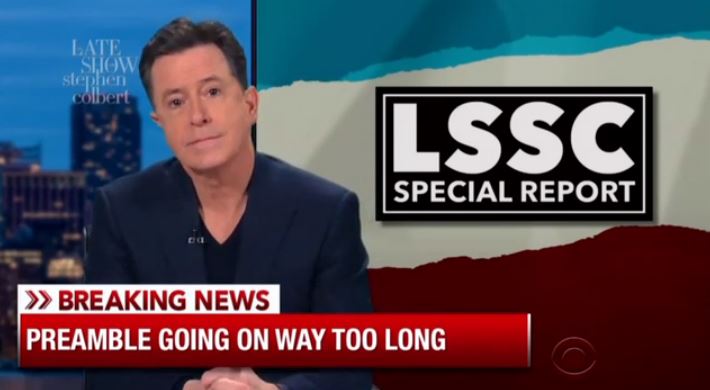 STEPHEN COLBERT:  I hold in my hand something very significant. It is a joke. A joke that we have confirmed has been heard by Donald Trump. We believe this is the first time any joke connected with Donald Trump has been released. This is an old joke from before he was president. We've obtained this joke legally. The First Amendment gives us the right to tell this joke. This—  this piece of paper I hold in my hand, the part facing me with the words that you can't see, this is the document with the joke.

The joke in question, "Why did the chicken —" but first a word on chickens. Chickens are flightless birds domesticated 3,000 years ago in Mesopotamia. They produce both meat and eggs, as well as companionship. They are eaten by people like Russian oligarch, Dmitry Rybolovlev. Riboflaven. Rama-lama-ding-dong. Robo-ruh-roe. He's a Russian with confirmed ties to chickens. More on that later when I discuss it with this chicken expert. [Pulls out chicken.] But back to the joke. "Why did the chicken cross the road?"

Okay, what are roads? Why do we need them? Do tax dollars pay for roads? They do. What can be a road? Is it a highway? Is it a road, a track, a toll way? A thoroughfare or a public way traveled by foot, cart, truck, bus, bicycle, and, of course, other. And where is this road-crossing chicken going? Mar-a-Lago? Is it going to Russia to be chicken kiev? These are important questions I will be answering. But whether or not you're a Trump supporter, whether or not you've heard this joke before. It ought to give you pause that after all of this buildup, I still haven't gotten to the punch line. So without further ado, "Why did the chicken cross the road?" The answer right after this break. 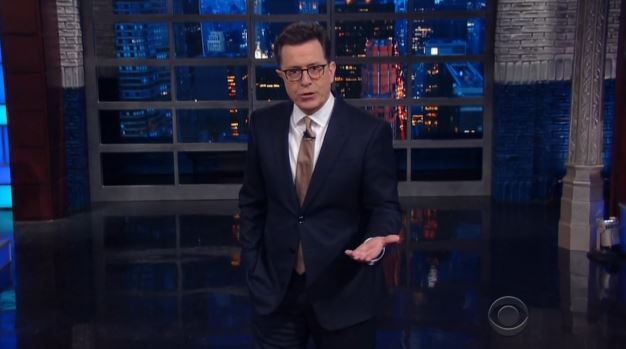 COLBERT: Huge news about Donald Trump almost happened last night. For years, people have wanted to see his tax returns. The only thing he hides more fiercely is the true color of his face. I want to guess bleached jelly fish. Well, last night at around 7:30, something like that, our friend Rachel Maddow unleashed a force five tweet-a-cane with: "We've got Trump tax returns. Tonight, 9:00 P.M., MSNBC. Seriously." So important for news networks to add "seriously" to any announcement. so the audience knows you're not pranking them, like you do. It's a long tradition in the news business. We all remember the Hindenburg broadcast.

ANNOUNCER: Oh, the humanity! The flames are going up. I'm not yanking your chain, folks. For realsies!"

COLBERT: For realsies. For realsies. And then, we were all glued to it. I was watching the Twitter feed. And when 9:00pm came, Rachel took us on an emotional roller coaster Because, like a roller coaster, at the end you are all right back where we started and feeling a little queasy. First, she let us know just how much information she had to share.

COLBERT: She's got nothing. Then after 20 minutes of explaining what taxes are and who Donald Trump is, Maddow was ready show us the tax return.

MADDOW: We got it tonight, and I am sure it’s only the start. But it's a start, and our little piece of it. We just got it. We'll go through it next.

COLBERT: What! A cliffhanger? Is this news or a reality show? I don't want to watch "America's Got 1040s." Probably pretty good. Probably be pretty good. Howie’s pretty good. After the break, we finally got the long-awaited revelations.

MADDOW: I have here is a copy of Donald Trump's tax returns. We have his federal tax return for one year, for 2005. He paid 38, looks like $38 million in taxes. He took a big write down of $103 million. More on that later. If you add up the lines for income, he made more than $150 million in that year.

COLBERT: All right, let’s see. $38 million. Okay, what was it? $103 million write down? All right, $150 million income. That adds up to zero [bleep] being given. All right. Be sure to tune in to Rachel's next special report, "Wolf! Wolf! An exclusive look at what the boy cried."