ABC, NBC Out to Lunch on Law Firm Secretly Funneling Money to Dems

A Boston law firm has been secretly funneling money to top Democrats in an effort to influence the 2016 elections. Yet, ABC and NBC have, thus far, skipped the revelation. Only CBS This Morning on Wednesday covered the story. Co-host Gayle King explained, “Hillary Clinton's campaign is returning thousands of dollars in donations tied to what may be one of largest straw donors schemes ever uncovered.”

She added that the Thorton law firm has given thousands to Democratic Senators Elizabeth Warren and Harry Reid, as well as President Obama. Hillary Clinton is giving back her donation. Reporter Tony Dokoupil told viewers, “According to the firm's own documents leaked by a whistle-blower, days or even hours after making these donations partners received money matching the amount they gave.”

The lack of interest from ABC and NBC comes despite the fact that the Boston Globe has led the investigation (along with the Center for Responsive Politics).  This is the same team behind the child abuse scandal, highlighted in the movie Spotlight. 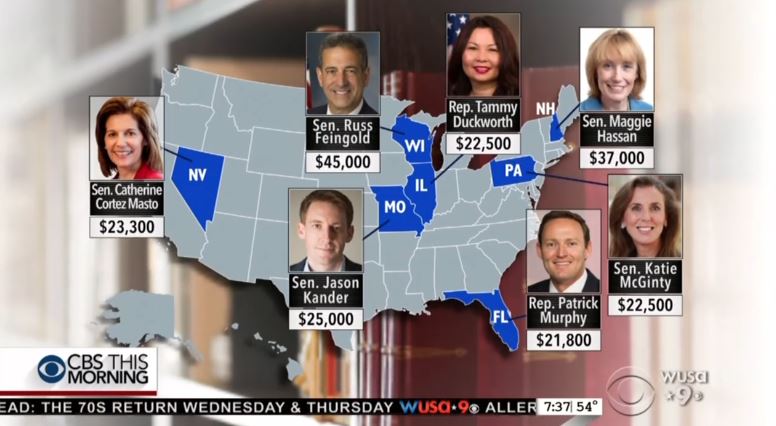 Dokoupil broke down how the scheme worked:

TONY DOKOUPIL: The Spotlight team and the Center for Responsive Politics looked at donations from three of the firms partners from 2010 to 2014. The trio and one of their wives gave $1.6 million, mostly to Democrats. Over the same period received $1.4 million back in bonuses.

This is called straw donor reimbursement.

Mrs. Clinton, Warren and other Democrats have condemned violations of campaign finance laws as well as corruption involving government and power brokers. Warren has yet to return her donations. One would think that ABC and NBC would show interest in this controversy and potential hypocrisy. So far, however, they’ve avoided embarrassing top Democrats.

GAYLE KING:  Hillary Clinton's campaign is returning thousands of dollars in donations tied to what may be one of largest straw donors schemes ever uncovered. It involves a small law firm that has given money to many top Democrats, including Senator Elizabeth Warren, Senate Minority Leader Harry Reid and President Obama. The program was exposed by the Center for Responsive Politics and the same team from the Boston Globe featured in the movie Spotlight. Tony Dokoupil is outside the law firm's office in Boston. Tony, good morning. 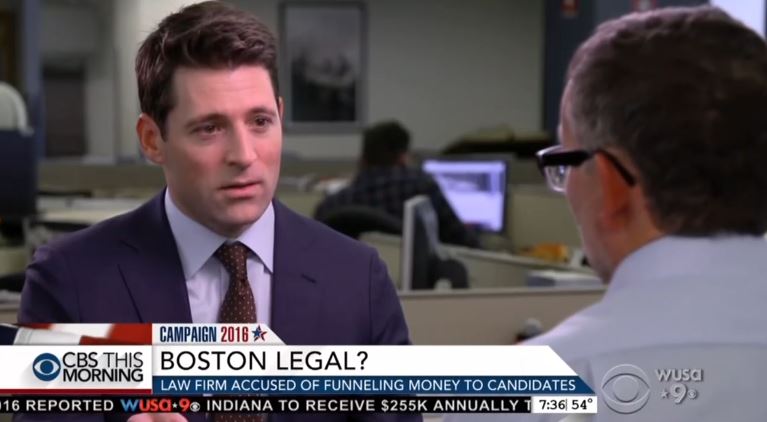 TONY DOKOUPIL: Good morning. The Thornton law firm is far from a household name but for years, Democratic politician walked through these doors behind me and reliably walked out with a haul of checks often worth tens of thousands of dollars. The Thornton law firm has just ten partners, but dollar-for-dollar it is one of the nation's biggest political donors. According to the firm's own documents, leaked by a whistle-blower days or even hours after making these donations, partners received money matching the amount they gave.

SCOTT ALLEN: Once the law firm knew we had these records, they didn't deny this was the case. 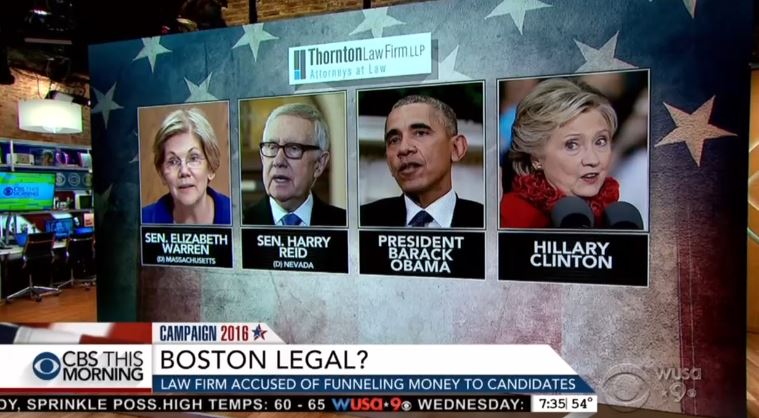 DOKOUPIL: Scott Allen is the Globe’s editor. So, hundreds and hundreds of times, a lawyer would donate money to a candidate or political party and then almost immediately be given back that very same sum?

ALLEN: That is correct. If you give a donation and somebody else reimburses you for the donation that is a clear violation of the spirit and letter of the law at the federal and state levels.

VIVECA NOVAK (Center for Responsive Politics, editorial director): Straw donor reimbursement systems are something that both the FEC and Department of Justice take seriously and people have gone to jail for this.

DOKOUPIL: The Spotlight team and the Center for Responsive Politics looked at donations from three of the firms partners from 2010 to 2014. The trio and one of their wives gave $1.6 million, mostly to Democrats. Over the same period received $1.4 million back in bonuses. A Thornton spokesperson said the donations are legal because they came out of each partner's ownership stake in the firm. In other words, they paid with their own money. It was a voluntary program which only involved equity partners and their own personal after tax money to make donations.” The firm said in a statement. Through it’s employees, gave to top Democrats running in this year’s most hotly contested races, ones that could determine control of the U.S. Senate. It’s a lot of money.

KRISTEN HUGHES (Massachusetts Republican Party Chair): It is a lot of money.

DOKOUPIL: Massachusetts Republicans are calling for an investigation.

HUGHES: In the end, it's about restoring integrity to a process that folks are already extremely weary of.

DOKOUPIL: How confident are you this is an isolated program if only Thornton does it?

ALLEN: I am not confident at all. We have had a number of parties coming forward to us saying, “Hey, they do this at our place too.”  The issue is always can you prove it?

DOKOUPIL: And CBS This Morning has learned the non-partisan Campaign Legal Center will file a complaint with the Federal Election Commission later today. In the meantime, Senator Elizabeth Warren, who has received nearly $130,000 from this law firm since 2007 told the Boston Globe she won't return any of the money until the investigators find that the donations were illegal. Norah?