Former Bill Clinton operative turned Good Morning America co-host George Stephanopoulos grilled Donald Trump about his campaign against the wife of his old boss. The businessman brought up Stephanopoulos’s shady connections, including $75,000 in secret donations to the Clinton Foundation.

The journalist demanded, “When you look back over the sweep of this campaign going back to last June is there anything you regret?” Trump shot back: “I'd love to have done, in life, certain things over I guess. And you would have too.” The candidate added, “You would love to have not contributed to the Clinton Foundation as an example. There are things you wish you didn't do. Okay?”

After Stephanopoulos tried to spin press bias as free media, this exchange followed:

GEORGE STEPHANOPOULOS: At the same time, you were the beneficiary of a billion dollars in free media during the primaries.

DONALD TRUMP: I don't know if you call it a billion dollars, free, when it's bad. What it should really be, what they should be talking about is WikiLeaks and the horrible things that have come out about Hillary Clinton. The horrible things. 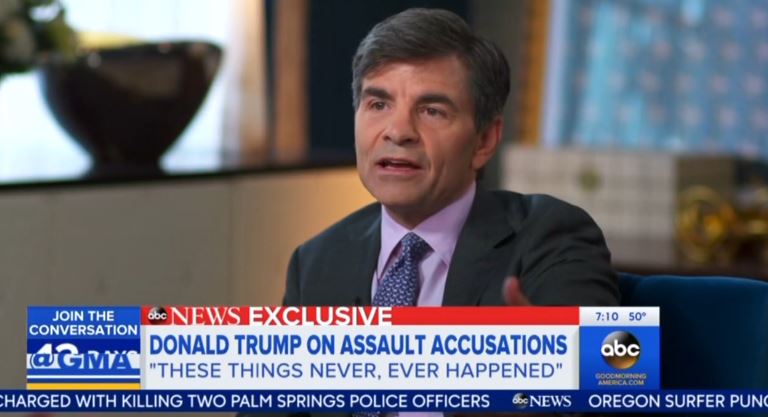 In June of 2015, another such contentious exchange occurred. The real estate businessman began by calling Clinton's e-mail controversy "scandalous." Trump paused, remembering who he was talking to. The candidate derided, "Of course, you shouldn't be talking to me about that, in all fairness. You shouldn't be asking me those questions, but I don't mind."

A partial transcript of Thursday’s segment, which aired at 7:07AM ET on October 27, follows: 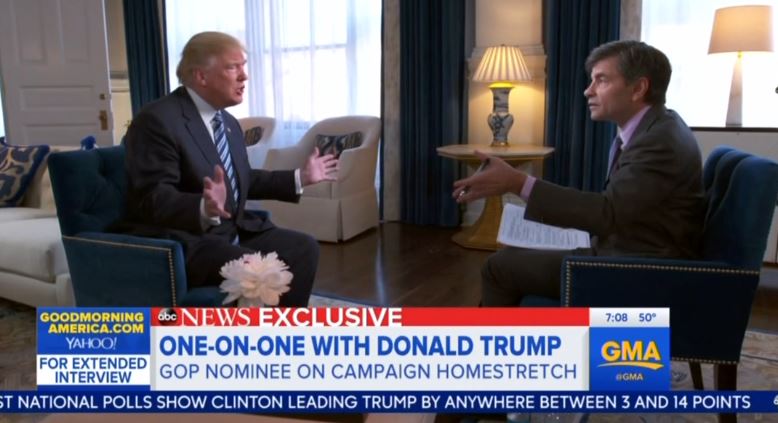 STEPHANOPOULOS: On Saturday, you said you threatened to sue the 11 women who accused you of sexual assault.

TRUMP: You know? I hate that you waste time when we're talking about ISIS and we’re talking about jobs and you're still bringing that up. Everybody wants to bring it up. Look --

STEPHANOPOULOS: That was just Saturday.

STEPHANOPOULOS: Do you have any evidence of that?

TRUMP:  Why didn't she write the story 12 years ago.

STEPHANOPOULOS:  She says she was afraid.

TRUMP: Oh she’s afraid. Give me break. She was afraid to write it? She would have gotten the Pulitzer Prize.

STEPHANOPOULOS: All these women, everyone they talked to, is lying?

TRUMP: They made up stories. You know why? Fame or they wanted to help Clinton or something --

STEPHANOPOULOS: They came out after you denied the behavior.

STEPHANOPOULOS: So, you're going to go through with the lawsuit.

TRUMP: We'll find out. Let's see what happens with the election. We're going to find out.

STEPHANOPOULOS: When you look back over the sweep of this campaign, going back to last June is there anything you regret?

STEPHANOPOULOS: Give me one.

TRUMP: You would love to have not contributed to the Clinton Foundation as an example. There are things you wish you didn’t do. Okay? There are things I would have rather, you know, not happen but, George, all you can do is you put your head down and you have to go forward.

STEPHANOPOULOS: Do you think you should have apologized to the Khans or Judge Curiel?

STEPHANOPOULOS: You did support it initially. The invasion.

HOWARD STERN: Are you for invading Iraq?

TRUMP: Yeah, I guess so. You know, I wish it was -- I wish the first time it was done correctly.

TRUMP: Way before the war started and that was the first time I was even asked about Iraq I gave a very like, I don't know. Who knows, had I been president, Captain Khan would be alive today. We wouldn't have been in this horrible, horrible mistake, the war in Iraq.

STEPHANOPOULOS: Final question, I heard backstage Cardinal Dolan said you said Hillary Clinton was a tough and talented lady. She said if I win, we have to work together. I know you think you're going to win. If she wins, are you prepared to work with her?