PBS host Charlie Rose on Thursday discussed Kim Kardashian and the musical Hamilton with Supreme Court Judge Stephen Breyer. Yet, he offered no tough questions on the justice’s liberalism and instead labeled him a moderate. In a fawning introduction, Rose told viewers that Breyer “is known for his pragmatism and his love of literature and love of architecture.”

Later, the judge discussed the Second Amendment and focused on state militias. He lectured, “That is what I thought they [the Founding Fathers] were talking about, which is not the right of an individual to keep a gun next to his bed.” Stripping the Second Amendment right of millions of Americans is moderation and pragmatism? (Breyer dissented in the landmark 2008 Heller decision that the Second Amendment does protect the individual's right to own a gun.)

Instead of pressing Breyer on this, Rose focused on topics such as the fact that the justice referenced tabloid icon Kardashian in oral arguments: “Let me ask you this: Did you ever, ever, ever, ever, did your wife, ever, ever, ever think that your name would be in the same sentence with Kim Kardashian?” 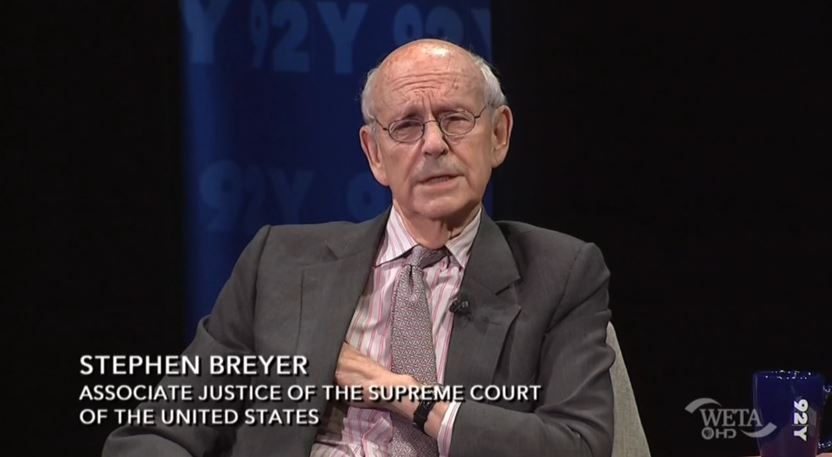 Later, Rose mused, “I assume you saw [the musical] Hamilton?” The closest thing the journalist, who also hosts CBS This Morning, came to pressing Breyer on his ideology came with this question:

ROSE:  What do you think, is it a combination of things that has given you what might be considered your essential judicial outlook? Was it your education? Was it the environment of growing up? Was it some combination of this?

What about liberal ideology? Or Breyer's work with Senator Ted Kennedy. But Rose didn't ask that.

The event took place at the 92nd Street Y in New York City.

CHARLIE ROSE: Stephen Breyer has served on the Supreme Court for more than two decades. President Bill Clinton nominated him in 1994. He was first named to the bench by President Jimmy Carter in 1980. He served 14 years as a judge and later as chief judge of the court of appeals for the first circuit in Boston. He is known for his pragmatism and his love of literature and love of architecture. His third book, the Court and the World was published last year. It explores the role of foreign and international law in American judicial decisions. I spoke with Justice Breyer at the 92nd street Y here in New York City and here is that conversation.

ROSE: After 22 years, how do you—  how have you changed in terms of how you see your role. And how you see the Constitution?

ROSE:  What do you think, is it a combination of things that has given you what might be considered your essential judicial outlook? Was it your education? Was it the environment of growing up? Was it some combination of this? I mean, how did you end where you are in your own —

STEPHEN BREYER: That's a very good question. And I think it's the crucial question. Because I think if you look at say the 5-4 cases, you are not going to explain on the basis of politics. When I worked with Senator Kennedy, politics meant where are the votes, are you a Republican, Democrat. No, nor is it really ideology. Are you a Marxist, Leninist, trouble make or Adam Smith free enterpriser. No, that's just not. It is, perhaps, with these very broad words, liberty in the 14th Amendment. The freedom of speech, words that don't explain themselves in the difficult cases.

ROSE: People will say in the end, here is the reason that we have to vote a, Republican or B Democrat. Because the next president of the United States will be able to have a dramatic influence on the Supreme Court. And that is what will have influence over decades.
...

ROSE: Would you rather be a swing justice or the Chief Justice?

ROSE: I assume you saw Hamilton?

ROSE: What does the Second Amendment mean to you?

BREYER: Well, of course I can say what the court-- why don't I start the other way. Say the opinion I wrote.

BREYER: What I thought it meant is this: It says “a well regulated militia being necessary for the security of a free state, the right of the people to keep and bear arms shall not be infringed.”  Okay? What did I think it meant. And John Stevens thought it meant and Ruth Ginsburg several,  David Souter, what we thought it meant? in Article one of the Constitution, it gives to the Congress the power to call up and regulate state militias. Okay. There was a lot of concern, if you read the Federalist Papers will you just get a feeling for it. There was a lot of concern and fear that congress might do that and disband them. And replace the state militias after they had disbanded them with a federal army. And that, many people said, vote no on the Constitution because if they can do that, then they can—  this federal government, destroy your freedom. Well, said Madison in a sense, as I paraphrase him, “Never fear, we will put in the Constitution an amendment which says Congress can't do that. It cannot call up and disband the state militias. Why? Because a well armed militia is necessary for the security of a free state. IE a state militia. And therefore the right to keep and bear arms shall not be infringed. In other words, they're talking about that. That is what I thought they were talking about, which is not the right of an individual to keep a gun next to his bed. Okay?