ABC Warns: It Would Be ‘A Terrible Decision’ for Trump to Go After Bill’s Affairs at Next Debate

Good Morning America’s Jon Karl on Thursday warned Donald Trump against mentioning Bill Clinton’s numerous affairs at Sunday’s town hall debate, lecturing that it would be a “terrible decision." Talking to ex-Clinton operative George Stephanopoulos, Karl opined, “All this talk about him going after Bill Clinton's infidelities, I think that's very hard to do in an intimate setting where the town hall attendees are right there.”

Karl added, “I think that would be a terrible decision for him to do.” On the subject of Clinton’s affairs, Stephanopoulos underlined that "it will be quite different for him from the last debate.” He also reiterated Karl’s point that it “will be better for [Trump] not to do it.”

Stephanopoulos and Karl covered themselves by suggesting it’s only the format that makes going after Clinton’s infidelities a bad idea. Karl insisted that this specific town hall means it will be "very hard for him to go personal." But when have the journalists at ABC, or other networks, applauded the idea of hitting the Democrat on sexual indiscretions? 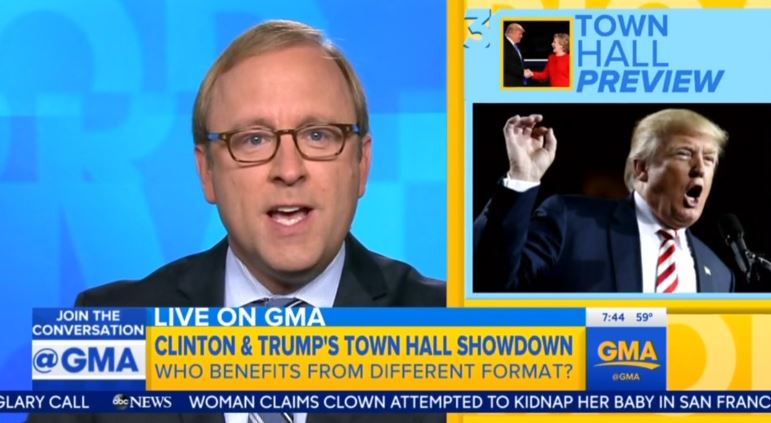 7:43:13-7:46:10
STEPHANOPOULOS: Let's move on now, take a deeper look at the big debate Sunday night. It will be a different kind of debate. A town hall format. As we said, Martha Raddatz will be one of the moderators that night. Jon Karl will be on the scene as well. You saw me talking to Kellyanne Conway in our last half hour. She says Donald Trump is great at this format. He’s done a lot of town meetings, he’s doing another one tonight. But it will be quite different for him from the last debate.

KARL: Entirely different dynamic and I actually think this could be a good format for Donald Trump. For a couple of reasons, George. One, he has done a fair amount of these. I've been with him at town hall meetings in Iowa and in New Hampshire in the early primaries. He was pretty good. He feeds off the crowd. The other reason, though, I think this could be good for Trump, is it's going to be very hard for him to go personal. All this talk about him going after Bill Clinton's infidelities, I think that's very hard to do in an intimate setting where the town hall attendees are right there."

STEPHANOPOULOS: And you're saying that will be better for him not to do it.

KARL: And that's actually good for Trump. I think that would be a terrible decision for him to do, yes.

STRAHAN: Jon what do you think are the keys to success for these candidates in a town hall?

KARL: I got a couple of rules for you, Michael. First of all, one thing about this format, you're not tied to the podium. You can wander around the stage. So my first rule is stay in your zone. Remember, when George W. Bush debated Al Gore and Al Gore walked over to him, got into his personal space during one of the questions. Take a look at what happened. Bush basically dismissed him with this look like what are you doing? I think that one look actually helped bush win that debate.