Co-host George Stephanopoulos noted the “problem of anti-Muslim attacks.” He added, “They have been on the rise since last week's massacre and there are concerns that Donald Trump's comments could incite more violence.” Reporter Matt Gutman’s primary example was someone throwing a pig’s head at a mosque.

Gutman highlighted, “The Council on American-Islamic Relations saying the spike follows both the San Bernardino rampage and Donald Trump's calls for a ban on Muslim immigration.” The journalist continued, “The mosque [shooter] Syed Farook attended threatened the night after the rampage and mosque attendance is down.” 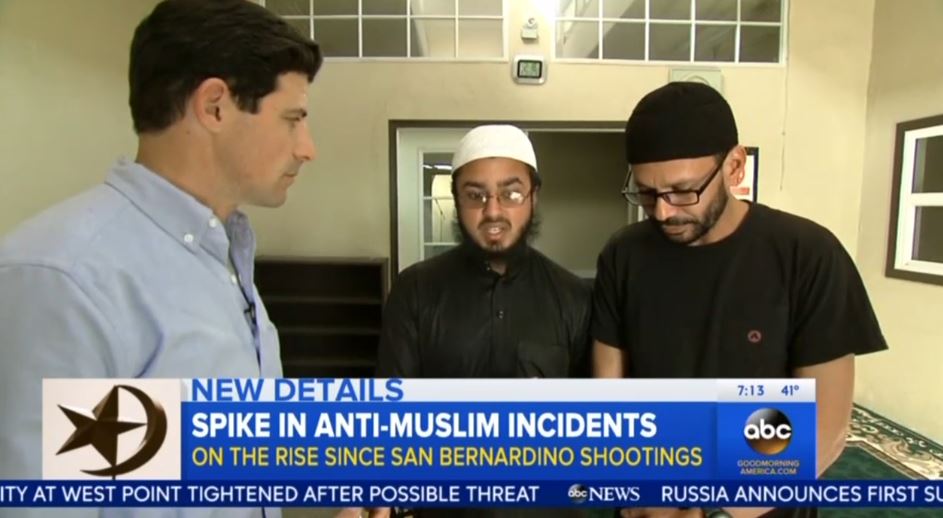 The journalist then featured this CAIR representative:

ALIA SALEM (Executive director, CAIR-DFW): You feel scared as an American about what's happening in our country. But then at the very same time you're afraid for your own life, because of, you know, what people are doing in retaliation.

Nowhere in the segment did Gutman or Stephanopoulos note CAIR’ sketchy connections. As the National Review explained in 2007: 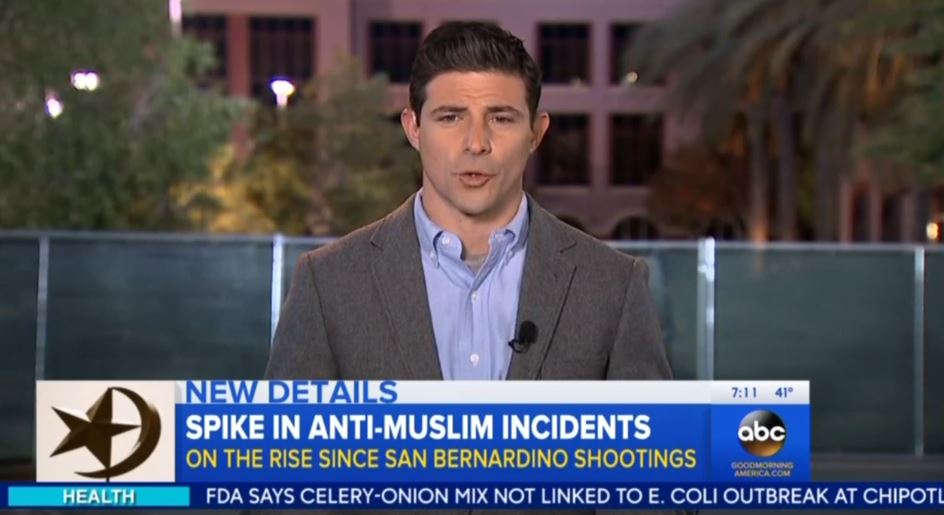 One of the most significant terrorism prosecutions brought by the government since 9/11 commenced trial last month in federal district court in Dallas. The government’s 42-count indictment charges seven individuals and the Holy Land Foundation — the biggest Islamic charity in the United States — with offenses including conspiracy to provide material support to a foreign terrorist organization, namely, Hamas. Two of the seven individual defendants have not been arrested and are fugitives.

CAIR is, in fact, among the more than 300 unindicted co-conspirators of the Holy Land Foundation named by the government in the Holy Land Foundation prosecution. The trial has already produced evidentiary bombshells detonating along a path leading to CAIR. It has introduced evidence placing CAIR executive director Nihad Awad at the 1993 Philadelphia meeting of the Muslim Brotherhood’s Palestine Committee. FBI agent Lara Burns has testified that CAIR was listed as a member of the Palestine Committee.

On Monday, CBS’s Omar Villafranca echoed ABC’s segment: “In the wake of the attacks in Paris and San Bernardino, Muslims around the U.S. say the rhetoric against them has become increasingly incendiary.” 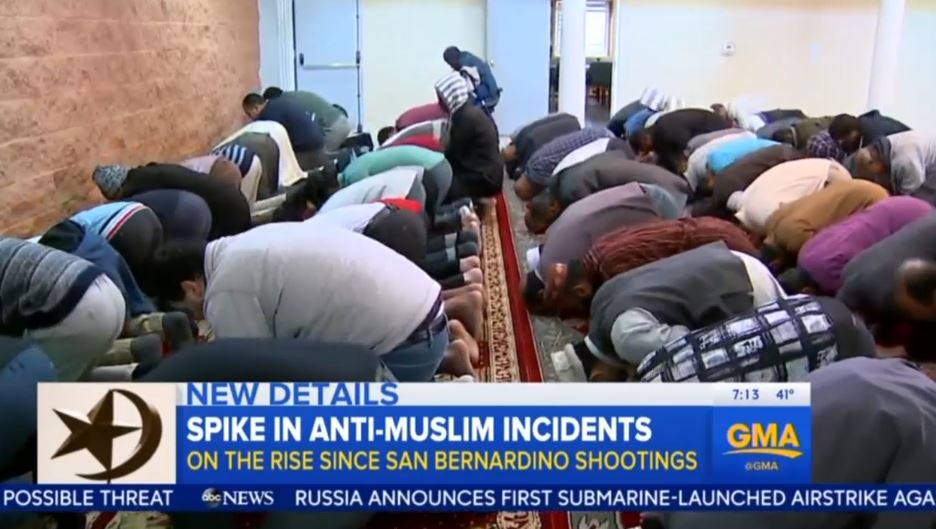 GEORGE STEPHANOPOULOS: We’re going to move on to the problem of anti-Muslim attacks. They have been on the rise since last week's massacre and there are concerns that Donald Trump's comments could incite more violence. ABC’s Matt Gutman is in San Bernardino with that part of the story. Good morning, Matt.

MATT GUTMAN: Good morning, George. A week after the attacks in that conference building behind me, Muslim groups are saying they are now the targets of increasing intimidation and threats. They’re saying that it's even changing the way some people go out, the way they dress, even the way they pray. It's being called the biggest spike in anti-Islamic incidents since 9/11. And it’s not just rhetoric. In Philadelphia, surveillance video of a pig's head thrown at a mosque. The FBI now investigating. Threatening voice mails left at a mosque in St. Louis.

UNIDENTIFIED VOICE MAIL: Come may way and I'll [bleep] you all. Cut your [bleeped] head off.

GUTMAN: And in Dallas.

UNIDENTIFIED VOICE MAIL: I hope you get sprayed with pig's blood, okay? You are just [ bleep].

GUTMAN: This Palm Beach mosque vandalized with windows smashed. All of this triggering fear.

ALIA SALEM (Executive director, CAIR-DFW): You feel scared as an American about what's happening in our country. But then at the very same time, you're afraid for your own life because of, you know, what people are doing in retaliation.

GUTMAN: The Council on American-Islamic Relations saying the spike follows both the San Bernardino rampage and Donald Trump's calls for a ban on Muslim immigration. And here in San Bernardino, intimidation. The mosque Syed Farook attended threatened the night after the rampage and mosque attendance is down. One of its members confronted at a memorial. You had been, sort of, really confronted.

GUTMAN: Some are changing their behavior.

UNIDENTIFIED MAN: Go out in a group. If I was going to go out alone, I wouldn't go alone. I would take two or three guys with me.

GUTMAN: And even changing their dress.

UNIDENTIFIED MAN: Amongst the women and stuff, I’ve heard, like, don’t wear the hijab. Take it off.

GUTMAN: And this morning,  the detective who said he would take a bullet before the evacuees —

JORGE LOZANO (San Bernadino County sheriff’s department): I’ll take a bullet before you do. That’s for damn sure.

GUTMAN: — is speaking out about that moment. Admitting he was also scared but knew people were counting on him.

LOZANO: I meant what I said. I said it for them just to kind of calm down and relax, that we were going to do everything we can to get them out of that building safely.

GUTMAN: Of course, among the people that hero officers ferried out of that building were Muslim-Americans. And to give you a sense of how enmeshed the community was, when we arrived at that mosque yesterday for that interview, we saw a sheriff's deputy coming out. He had actually been praying there. Robin.

ROBIN ROBERTS: Something to keep in mind, Matt. All right. Thank you.