Regarding the moderate Kasich, Oliver saluted, “You know what? Good for him. Good for him.” As though someone didn’t have to pay the bill, he sneered, “Although it's a bit weird when accepting billions of dollars to give health care to poor people is somehow a brave and noble stand when all Kasich technically did was see a dump truck full of money backing into his driveway and not say stop.”

Of course, as the Galen Institute points out:

Medicaid spending will increase dramatically as the federal matching rate for the expansion population begins to drop.  Adjusted for inflation, Medicaid spending has increased more than 250% since 1990.[7]  Expanding Medicaid would cost states an additional $118 billion through 2023, according to a recent congressional report.[8]  The additional spending surely would crowd out funds for education, transportation, parks, public safety, and other vital state needs.

Even under current spending projections, 40 states will see an increase in their costs if they expand Medicaid.  After the first three years of the 100% federal match, state costs will continue to climb, dwarfing any projected savings.  Only a few large states, such as New York, will see savings because they already have expanded Medicaid and can transfer additional costs to federal taxpayers.

Finally, not expanding Medicaid doesn’t mean other states get the money.  The expansion is an entitlement; if one state doesn’t expand, the money stays in the federal coffers (or reduces the amount Washington must borrow).

Oliver’s comedy is less about being funny and more about tired liberal attacks. On October 30, he asserted “American democracy looks like a four-year-old’s birthday.” On October 18, he assailed Canada’s conservative prime minister as an “evil” “Islamophobe.” 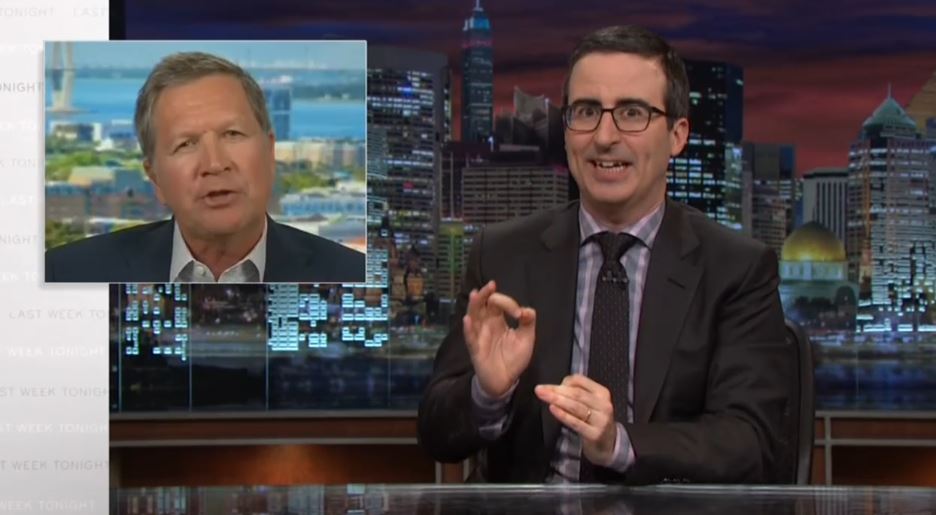 JOHN OLIVER: The Supreme Court struck down the part of the law which enabled the government to force states to expand Medicaid, which meant states could choose to reject the expansion. Even though that would be an odd decision. Under the law, the federal government would pay 100 percent of the cost of the first three years, eventually decreasing to 90 percent.  And I can't think of anything I would not buy if I only had to pay ten percent of the price. Fred Claus on DVD? I mean, no thank you. But yes, I’ll take it. Vince Vaughn is always good for 49 cents worth of yuks. Basically, for relatively little of their own money, states could cover all their poorest citizens. It was an exceptionally favorable deal. But guess what many states chose to do?

RICK PERRY : Texas will not be participating in Medicaid expansion.

BOBBY JINDAL: They're working hard to change the American dream into European nightmare.

GOV. PHIL BRYANT: This system we call ObamaCare that we now see is going to be a train wreck and I do not the name of Mississippi emblazoned across that train when it leaves the tracks.

OLIVER: It's fucking tragic. The frequent argument for states refusing the expansion is they couldn't bear the increased cost. Although, it is worth noting that —  to their credit —  even fiscally conservative Republican governors like Jan brewer, Chris Christie, Mike Pence and John Kasich did expand Medicaid in their states, despite being firm opponents of Obamacare.

JOHN KASICH: I don't support Obamacare. I want to repeal it. But I did expand medicaid because I was able to bring Ohio money back home to treat the mentally ill, the drug addicted and to help the working poor get health care because you oppose Obamacare doesn't mean when you have an opportunity to bring these $14 billion of Ohio money back to Ohio, that's not Obamacare. That's Medicaid.

OLIVER: You know what? Good for him. Good for him. Although it's a bit weird when accepting billions of dollars to give health care to poor people is somehow a brave and noble stand when all Kasich technically did was see a dump truck full of money backing into his driveway and not say stop.