Liberal actor Sean Astin appeared on Politicking With Larry King to talk about his "child"-like support for Hillary Clinton and a promise to support her "no matter what." Astin also explained his Twitter feud with conservative actor Adam Baldwin. Regarding Mrs. Clinton, the Lord of the Rings star asserted, "But somebody from the Hillary campaign reached out to me, I support her, default setting, the way a child would support somebody."

Astin recounted speaking at an event with the then-first lady of Arkansas. After finishing, Mrs. Clinton shook his hand. The actor recounted, "In that moment, I said, 'I'm on Team Hillary, no matter what.'"

Astin described himself as a "patriot" and asserted that backing Clinton is pro-American: "God bless America. One of the things I know is important to protect my children is to see how we're being perceived by others around me. And our nation was not being perceived well around the world. And it is now and Hillary deserves a lot of credit for working like that.

LARRY KING: You got into a little Twitter tiff with fellow actor Adam Baldwin of ‘Full Metal Jacket' fame and ‘The Last Ship,' when he took a seemingly critical view of a tweet you sent out regarding Baltimore. Let me get it straight. You tweeted, "Baltimore's situation is so distressing. Angry can be useful but in modern media era, chaos plays into the hands of authority's.  Civil disobedience." Baldwin replied to Sean Astin, "Can't have your cake and eat it too. Depend on big government, get bigger and bigger government policing. Anarchy is just a transitional phase." You responded, "Blocking you for a while, man. Your flame throwing nonsense does a disservice to conservatives." 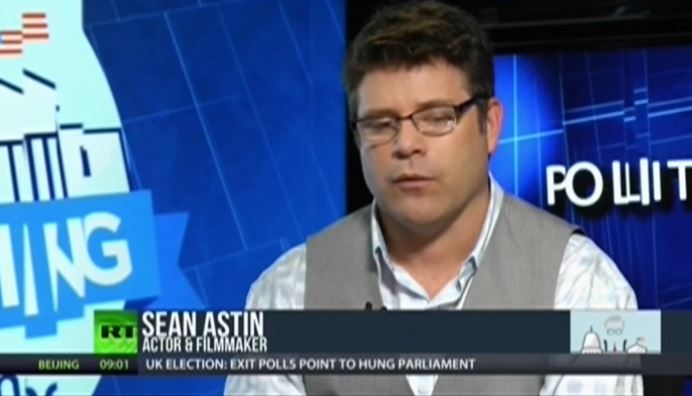 KING: Is he still blocked?

ASTIN: Yeah, but I'd unblock him now if I wanted to. That was a specific moment. First of all, I love him. When I see him in these convention settings that we go to, I give him a big hug. I was trying, and I've tried this a couple of times when these moments happen, to, you know, I think once I was on a plane, I think during the Ferguson thing I was flying back from Brazil, and I wanted to see if I could make some difference from the business class wifi going over the thing, and trying to say that civil disobedience, like stopping, impeding business, impeding the mechanics of government is in bounds, as far as I'm concerned. Ghandi did it, you know-

KING: Martin Luther King did it.

ASTIN: Martin Luther King did it, but non-violent. So, right. So, what Adam was doing in that moment - and there had been a long conversation before that -- and, he just has a very –  he enjoys mixing it up. He enjoys mixing it up. He's got a very strong conservative viewpoint, and I agree with a lot of things that he says. But in that particular moment I was trying to get people to do something. And they did it, without me!  Without Sean. 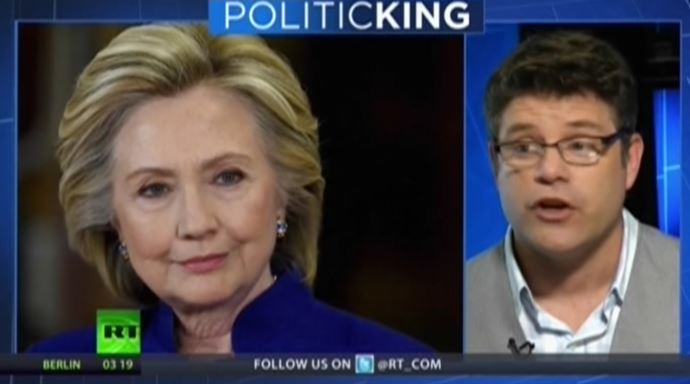 LARRY KING: You were a big backer of Hillary Clinton. Gonna' support her again?

KING: Have no problems with the financial questions?

ASTIN: I look critically at everything that happens. Money and politics is nasty business. And confusing and complicated. But any one of these brokers who casts barbs at the other one for how they manage those morals questions has better be specific, and nuanced. So, if Hillary Clinton as-- I don't know if people always say, you know -- they're the best secretary of state in the history of the country. Who the heck knows under Garfield what the secretary of state was. But when I watched her work as Secretary of State, she was indefatigable. The sheer number of miles that she put on and hands that she shook and people that she looked in the eye. And tried to build the relationship, its very easy to forget how hated our country was. Right, wrong, or indifferent, its my country and I'm a patriot. God bless America. One of the things I know is important to protect my children is to see how we're being perceived by others around me. And our nation was not being perceived well around the world. And it is now and Hillary deserves a lot of credit for working like that.

ASTIN: But somebody from the Hillary campaign reached out to me, I support her, default setting, the way a child would support somebody. The very first political thing I ever did was- when I was in community college and I flew to Colorado University Boulder to speak before Hillary, who was first Lady of Arkansas at that point, and it was her single biggest, it was like 15,000 people, it was her biggest event without the governor. And I was there, Dana Delaney was there, Michelle Shocked was there, and I stood up in front of these 15,000 people, I didn't know what I was going to say, I just talked about wanting a better world for my kids, really, and then Secretary Clinton got up and she spoke for, it was well over an hour, and no notecards. And she touched with such depth and passion and feeling about what we can do in our world to make it a better place. Better place for normal people. So I don't care how many millions she has, or how many millions President Clinton gets to give a speech, the fact that when she speaks about helping poor people, I believe her, and that meant something to me. And when she finished her speech, she turned around and she shook my hand and looked me in the eye and said thank you for being here, and in that moment I said I'm on Team Hillary, no matter what."