MSNBC, the Network With a 9/11 Truther Host, Smears Climate Skeptics as 'Truthers'

MSNBC, which is the home of 9/11 Truther Toure, on Wednesday smeared Republicans skeptical of climate change as "truthers." During a segment on the latest United Nations report on global warming, Now host Alex Wagner touted White House talking points, playing a clip of an Organizing for America commercial labeling House Speaker John Boehner a "climate denier."

Later in the segment, an MSNBC graphic appeared with an image of the globe and the GOP elephant. The graphic read, "truthers?" It's a sleazy move for MSNBC to lump conservative skeptics of global warming in with those who believe that the United States government was behind the September 11, 2001 terrorist attacks. But it's also hypocritical as Toure, who hosts the Cycle at 3pm on the network, has publicly supporter trutherism. 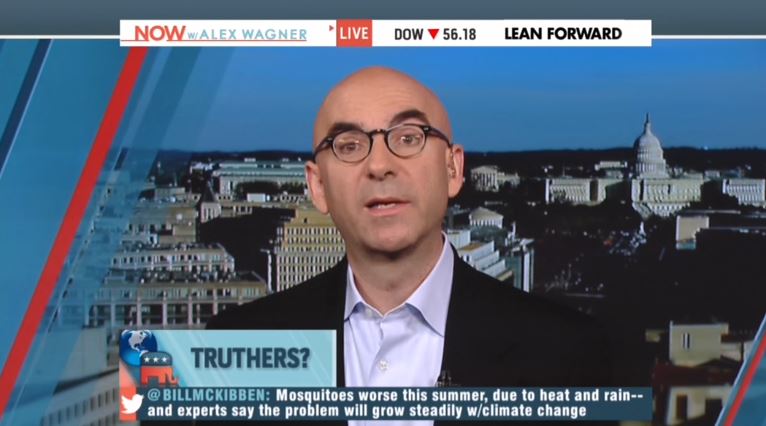 For instance, he has previously tweeted, ""How could a plane crash into the Pentagon? And not appear on video cameras?? And leave little wreckage??? #Don'tbuyitfiremenow." (For more of his 9/11 truther e-mails, go here.)

Wagner on Wednesday featured a panel of liberal guests to slam Republicans. Radio host Kurt Andersen insisted that people like John Boehner are either climate skeptics "because they are ignorant and crazy or simply appealing to ignorant and crazy people."

Wagner talked to Joe Romm from the Center for American Progress, a liberal organization. She introduced Romm by insisting things are far worse than even the United Nations report will allow: "You say this one is an instantly out of date snapshot that low balls future warming. So, in fact, it's even worse, way worse, than this climate panel would have us think?"

A partial transcript of the segment, which aired at 12:40 on August 21, follows: 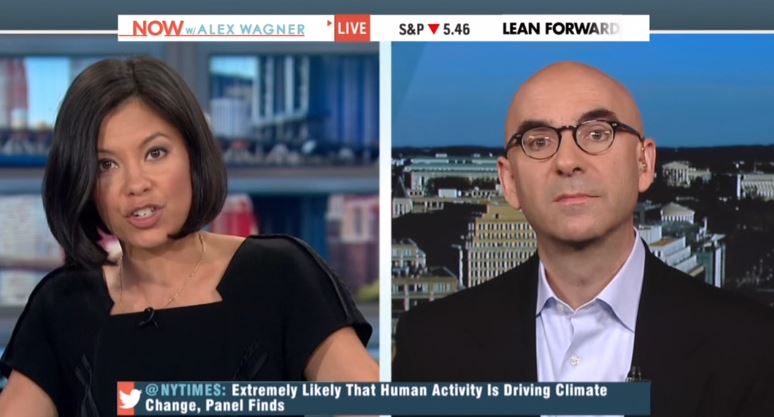 ALEX WAGNER: The latest report from the world's leading climate panel is dire. The IPCC, the U.N. Intergovernmental Panel on Climate Change, recipient of the 2007 Nobel Peace prize finds that the recent increase of carbon dioxide, methane and nitrous oxide is unprecedented in the last 22,000 years. Revising their already grim estimates from their last reports in 2007, the commission now believes with 95 percent certainty that humans are the principle cause of climate change. The panel also warned that sea levels, one of the greatest threats posed by climate change, could rise by more than three feet in the next 80 years. But these days even science is partisan. Witness, Speaker of the House John Boehner.

[Clip from Organizing for Action ad]

JOHN BOEHNER: The idea that carbon dioxide is a carcinogen that's harmful to our environment, it's almost comical. Every time we exhale, we exhale carbon dioxide. Every cow in the world, you know, when they do what they do, you've got more carbon dioxide.

JIM INHOFE: A lot of our listeners out there are not aware that you have to have CO2. That's a form of a fertilizer in order to grow things, it's actually sought after in many, in many cases. And so it's not something that you can't just automatically assume, well, we have to try to do something about CO2 because every effort that we do to think that we can change something that nature– You know, God's still up there.

WAGNER: And yet, as the IPCC report lays out in deeply distressing black and white, humans are changing nature, regardless of where God may or may not be. Joining us now is founding editor of Climate Progress and a senior fellow of the Center for American Progress, Joe Romm. Joe, thanks for joining us. You– I did not read the whole report. I read the analysis of the report to be honest and I found it deeply distressing as I find most environmental treatises to be these days. You say this one is an instantly out of date snapshot that low balls future warming. So, in fact, it's even worse, way worse, than this climate panel would have us think. Tell us more about that.

KURT ANDERSEN (Host, Studio 360): The Steve Kings and, as we saw, the John Boehners of the world, in maintaining this position, whether they're– because they are ignorant and crazy or simply appealing to ignorant and crazy people is-- remains to me shocking every time I hear these people. And the question is, when and will that change in the Republican Party, because they are practically in terms of a powerful entity in the developed world unique in taking this position.

WAGNER: Joe, before we let you go, I think one of the problems, maybe it's not a problem but it's a new sort of strategy that has to be employed by folks who want to see something done in terms of the environment, is talk about economics, because you look at what's happened in the United States. You have a drought disaster that was last year. The largest the -- the largest sort of scope of droughts in 50 years. Wildfires that have been raging that continue to rage. The average wild fire today burns twice as many acres as it did 40 years ago. And of course, hurricanes. No one will forget super storm Sandy. If this is framed perhaps in economic terms, perhaps there will be more political room to do something on it.

JOE ROMM (Climateprogress.org): Well, there's no question we're talking extreme weather. Climate change is here now. If people want to know what climate change is like, they can go out west. They can see the droughts, the wild fires. I think that people need to understand that the solution is something very affordable. We're just talking about replacing dirty forms of energy with cleaner forms of energy with solar and wind, which are increasingly coming down in cost.