ABC on Wednesday and Thursday parroted Barack Obama's anger over the failure of his gun control bill, touting the President's rage over this "shameful day." On World News and Good Morning America, reporter Jon Karl featured no pro-Second Amendment voices. Diane Sawyer trumpeted, "Tonight, outrage from the families of the victims of gun violence."

On Thursday, Good Morning America's Amy Robach reminded, "[Obama] called it a shameful day in Washington and vowed to keep fighting." Karl even misrepresented the legislation: "It would have expand background checks to all purchases at gun shows and online. They're now only required for guns bought at gun dealers." [See video below. MP3 audio here.] But most guns bought at a gun show are from dealers– dealers who require a background check. Additionally, the notion promoted by liberals that 40 percent of gun purchases are done privately is based on a 1997 phone survey. It's a "grossly exaggerated statistic," according to the Heritage Foundation.

In the GMA and World News segments, Karl featured clips of the President railing, "...The gun lobby and its allies willfully lied about the bill. So all in all, this was a pretty shameful day for Washington." 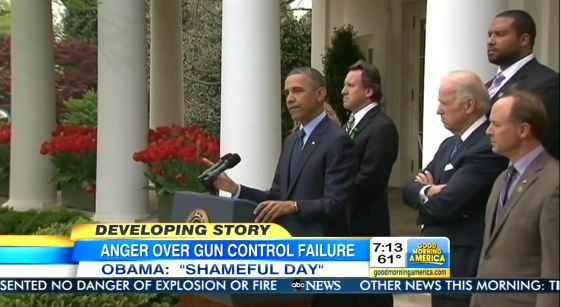 The reporter also featured Newtown family members angry over the bill's defeat, as well as Vice President Joe Biden. Nowhere in either segment was a single clip of any anti-gun control voices.

Only once, on World News, did Karl suggest that this was a defeat for the President, acknowledging that the bill "couldn't even get passed in the Democratically controlled Senate."

This single line couldn't equal the excitement seen at ABC last week. When it seemed as though the legislation might pass, Karl praised, "And it is a big, significant breakthrough. It doesn't get you all the way there, but it gets you a long way there."

A transcript of the April 17 World News segment is below:

DIANE SAWYER: Voted down. A huge defeat for the big gun bill. Tonight, outrage from the families of the victims of gun violence.

MARK BARDEN: Our hearts are broken. Our spirit is not.

DIANE SAWYER: And now we turn to that big vote in Washington and jolting defeat for the president on the gun bill crafted in response to the Newtown shooting. Tonight, it has failed in the Senate and the president spoke just this afternoon. ABC's chief White House correspondent Jonathan Karl is there now. Jon? 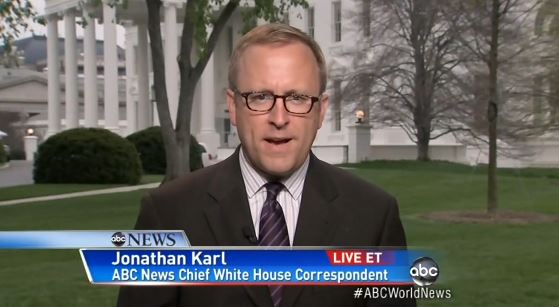 JON KARL: Diane, this was the single best chance to pass any part of the President's plan to combat gun violence and it couldn't even get passed in the Democratically controlled Senate. Surrounded by victims of gun violence, the President angrily denounced the Senate vote.

BARACK OBAMA: There are no coherent arguments not do to this. It came down to politics. So, all in all, this was a pretty shameful day for Washington.

KARL: The President was joined by Mark Barden, who lost his son Daniel in the Sandy Hook massacre.

JOE BIDEN: The amendment is not agreed to.

KARL: With Vice President Biden presiding, the bill fell short of the 60 votes it needed to pass. Prompting somebody in the galleries to shout out.

VOICE: Shame on you!

BIDEN: There will be order in the Senate.

KARL: The vote was a crushing disappointment to the victims of gun violence who had been pleading with senators to pass the bill. Many of them were here to watch as the vote went down. 12-year-old James Barden's six-year-old brother Daniel was murdered at Sandy Hook.

JAMES BARDEN: I feel that we owe it to Daniel, 'cause his life needs to mean something. And no one else should have to do this.

KARL: This was just one part of the President's plan. It would have expand background checks to all purchases at gun shows and online. They're now only required for guns bought at gun dealers. It means the rest of the President's gun plan is effectively dead. Although Joe Biden told us the fight is not over.

BIDEN: It's time for the American people to make it clear just how displeased they are with this vote. Let their representatives know that. This is far from over.

KARL: I just finished talking to those Sandy Hook families. They are tired. They are emotionally drained, but they're absolutely determined to continue this fight. But as far as this bill, Diane, this effort to expand background checks, it is all but dead for the rest of the year. There's virtually no chance it will be revived.