Good Morning America on Monday hyped Michael Bloomberg using his "personal fortune" to promote gun control with new ads. Reporter Jim Avila used three clips of either Bloomberg or the commercials he's now running in 13 states. Just one pro-Second Amendment voice was featured in the segment. In contrast, when the Koch brothers supported the Tea Party with commercials, GMA's journalists warned of the "billionaire boosters."

On Monday, Avila approvingly explained, "Mayor Michael Bloomberg has something many other big city mayors don't, a personal fortune he is willing to spend." Avila then played a clip of Bloomberg's new commercial featuring a man sitting on a pickup truck, holding a shotgun. He insisted, "I believe in the Second Amendment and I'll fight to protect it. But with rights come responsibilities. That's why I support comprehensive background checks." 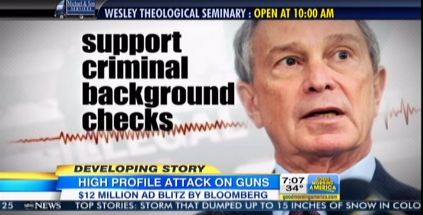 Avila played a second clip, this one of the New York mayor insisting broad support for his campaign and then another snippet of the same bearded pickup truck man claiming, "Background checks have nothing to do with taking guns away from anyone."

Finally, at the very end of the story, the journalist allowed one clip of Karl Rove defending the Second Amendment.

But apparently all billionaires aren't created equal. On October 7, 2011, GMA's Brian Ross warned that the conservative Koch brothers "are masters at trying to keep secrets both their political and business dealings."

He also featured a clip of a liberal documentary attacking the two businessmen.

Over on Monday's CBS This Morning, Bill Planted asserted that gun control forces are "getting help from someone with very deep pockets." Plante featured two examples of Bloomberg's ads and just one snippet of the National Rifle Association's Wayne LaPierre.

A transcript of the March 25 GMA segment is below:

GEORGE STEPHANOPOULOS: We're staying in Washington now. Move to the gun debate. More than 100 days since the Newtown tragedy. The President's call for a ban on assault weapons is going nowhere in Congress. But he's trying to save the rest of his legislation to stop gun violence with the help of billionaire New York Mayor Michael Bloomberg. ABC's Jim Avila has more on that. Good morning, Jim. 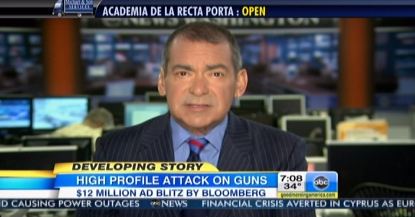 JIM AVILA: Good morning, George. He's the mayor of New York's largest city and has the ear of the President on important issues like immigration and gun control. Plus, Mayor Michael Bloomberg has something many other big city mayors don't, a personal fortune he is willing to spend. Today, pouring $12 million into two commercials supporting background checks for all gun purchases. They'll air in 13 key states from Arizona to Pennsylvania, where Bloomberg believes senators are on the fence.

BLOOMBERG AD: I believe in the Second Amendment and I'll fight to protect it. But with rights come responsibilities. That's why I support comprehensive background checks.

AVILA: On his weekly radio report, Mayor Bloomberg said he has public support.

MICHAEL BLOOMBERG: We know the American people are with us, too. Recent polls show 90 percent of Americans support criminal background checks for anyone purchasing a gun.

AVILA: A second commercial called "Family" tries to reassure gun owners that background checks are not aimed at the law abiding.

BLOOMBERG AD: Background checks have nothing to do with taking guns away from anyone.

AVILA: But the NRA opposes the new legislation. And on ABC's This Week, Republican strategist Karl Rove echoed its concerns.

KARL ROVE: If there's one thing that scares a lot of people that believe in the second amendment it's the federal government keeping a national registry of gun sales and gun purchacers and gun owners.

AVILA: The Senate is expected to vote on what is left of gun control legislation when it returns from recess in April. The assault weapon ban has already been dropped from the Senate package. George?