Matthews Slimes GOP as Racist for Going After Holder: An 'Ethnic' 'Stop-and-Frisk'

Liberal MSNBC anchor Chris Matthews on Tuesday slimed the House GOP investigating Attorney General Eric Holder as racist, insisting that the possible contempt charges over Fast and Furious had an "ethnic" feel. Using charged, racial imagery, Matthews demonized, "Is this sort of stop-and-frisk at the highest level? Go after the attorney general, get him to empty his pockets, stand in the spotlight."

The Hardball host, who had previously been ignoring the Fast and Furious scandal, changed course and portrayed the whole thing as a bigoted witch hunt. Talking to former San Francisco Mayor Willie Brown, Matthews speculated: "I don't want to start too much forest fire here, but it is my instinct: Is this ethnic, Mr. Mayor?" [See video below. MP3 audio here.]

The left-wing journalist weirdly speculated as to Congressman Darell Issa's motives: "If he can humiliate this guy, if he can get to him, he'll be a big star in the Republican caucus. He'll be Dick Nixon."

Congressman Richard Nixon became a "star" in 1948 by exposing communist spy Alger Hiss. Hiss, of course, was very guilty. So, perhaps this is not the best metaphor for Matthews to use.

Showing just how little he had covered Fast and Furious, Matthews asked Wade Henderson of the Leadership Council, "Explain Fast and Furious." His viewers could be forgiven for not knowing anything about it.

A transcript of the June 19 segment can be found below:

CHRIS MATTHEWS: Up next, when Republicans won control of the House of Representatives, their real prize, of course, was the subpoena power. They have got it and they are using it to go after the attorney general. Is this sort of stop-and-frisk at the highest level? Go after the attorney general, get him to empty his pockets, stand in the spotlight as long as they can and see if anything happens? That's ahead. 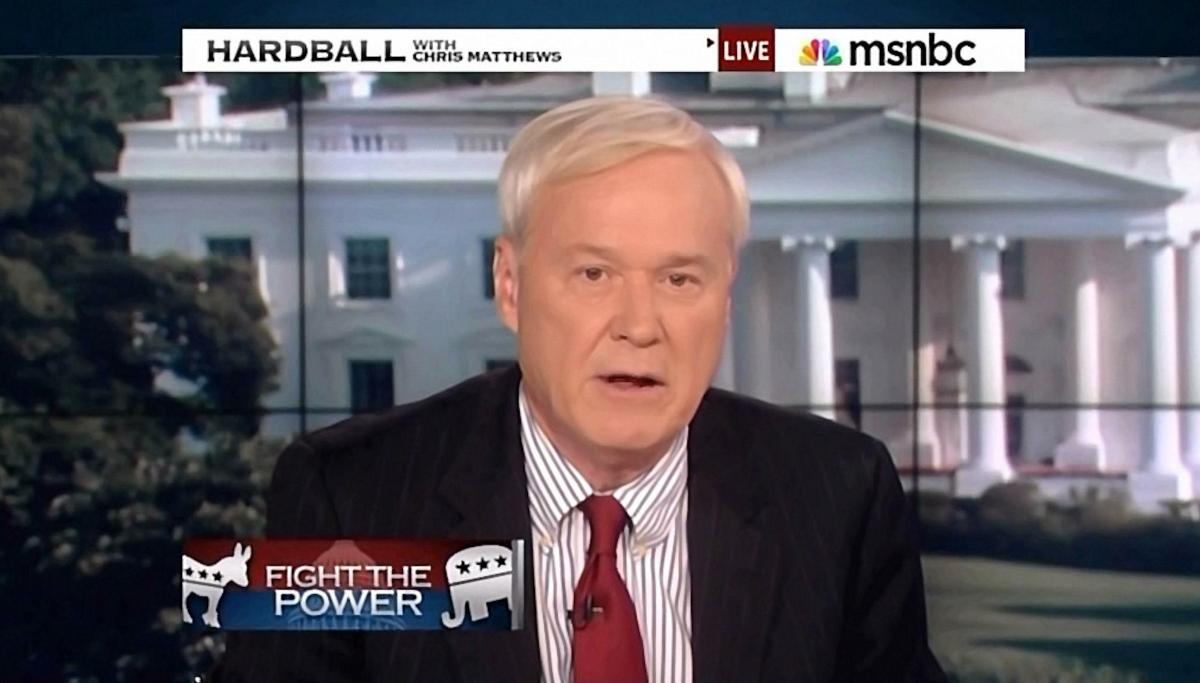 MATTHEWS: That was the House Oversight Committee chair, Darrell Issa, behaving in his usual way, two weeks ago hammering Attorney General Eric Holder for not turning over documents related to the so-called Fast and Furious campaign, the flawed gun tracking operation carried out by the ATF. Shortly after that, Issa set a vote to hold Holder in contempt of court, or contempt of Congress rather, for tomorrow at 10:00 a.m. Holder and Issa just wrapped up a meeting, by the way, a few moments ago, after which Issa says he's still waiting for the documents he wants and hopes to get them tonight, or wants to get them tonight. Willie Brown is a former mayor of San Francisco, former speaker of the California House, and Wade Henderson is the president of the Leadership Conference on Civil and Human Rights. Let me go to Wade first because I want to understand is there any reason why we should put any trust in the good intentions of Darrell Issa here?

WADE HENDERSON (Leadership Council): None at all, Chris. Chairman Issa is pursuing a politically motivated witch hunt that's designed to discredit the Justice Department and to force Attorney General Holder to resign. He's using Fast and Furious as the vehicle to pursue that witch hunt. But the truth is, nothing could be further from the factual bases for him making the assertion about Holder's lack of cooperation. 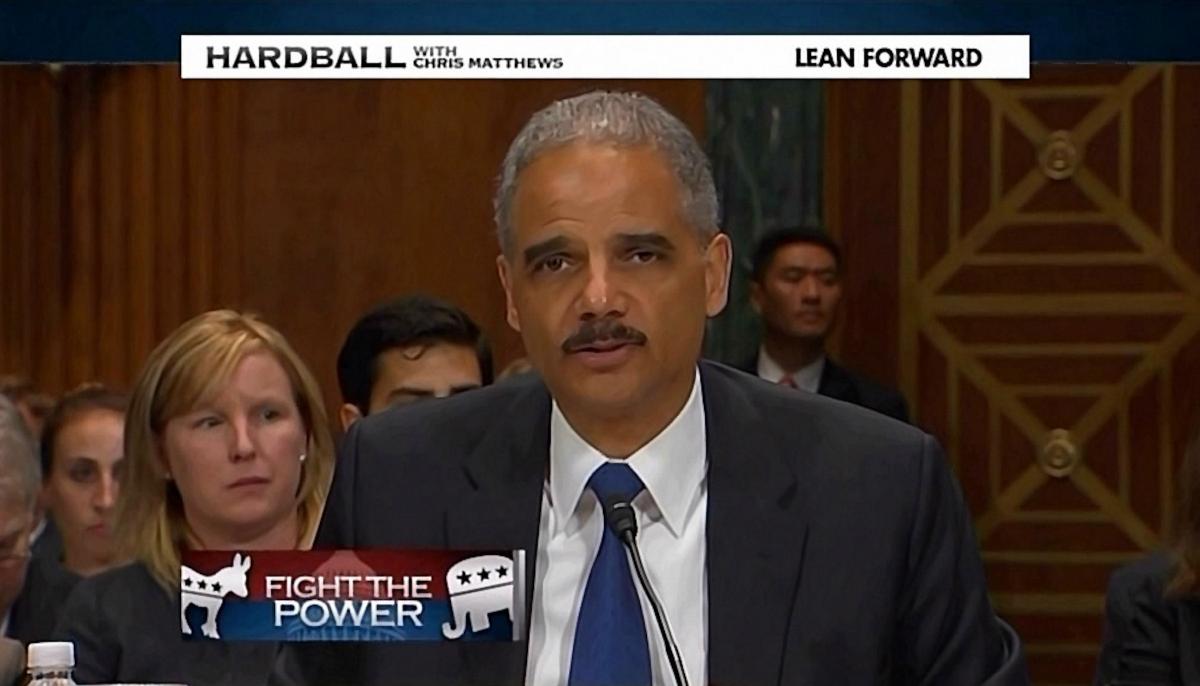 MATTHEWS: You know, when I look at this, Willie Brown, Mayor Brown, I just look at it- and I don't mean to use this term too much- but it's almost like a stop-and-frisk. Here's a chance to humiliate a distinguished member of the United States government, the attorney general- and everybody knows- close friend of the president's. It's a surrogate operation. If he can humiliate this guy, if he can get to him, he'll be a big star in the Republican caucus. He'll be Dick Nixon.

WILLIE BROWN (Former mayor of San Francisco): That's what he thinks, but obviously, that will not be the case, Chris. There are too many Republicans, I think, that are responsible and responsible enough to know that you're, you don't go down the road that he's going down in terms of contempt of a cabinet member. You just don't do that unless it's similar to what occurred with reference to the Bush administration when two members were cited in some manner or another for doing what they did of his staff. After that, there's nothing that you can justify such conduct. Other than the fact that you're leading kind of a lynch-like mob.

MATTHEWS: Well, let's got to some of the things that Issa before he even heard of this case. He was looking for a case. He said when he got, before he even took the oath for this Congress, Issa, the congressman look what he said. November 8th, 2010, before he took the oath, I want seven hearings a week times 40 weeks. He didn't say what they were for. I'm just going to have lots of hearings. He also said -- what's your jurisdiction? He said "we own everything." This is megalomania.

HENDERSON: Chris, you know, Attorney General Holder testified at least eight times before Congress. He has turned over thousands of pages of testimony. He is the only attorney general that actually appointed an inspector general or referred a matter to an inspector general for review, and he ended the program which was the subject of controversy. Rather than investigating, for example, Attorney General Mukasey, who started the actual program under debate, it was called Operation Wide Receiver, Mukasey has not been before the committee, we've had no discussion or with ATF officials, who were involved. It was A.G. Holder who actually disciplined some of the ATF officials who were involved. So the truth is this isn't about the facts regarding Fast and Furious. This is about creating a climate where the A.G. is going to be discredited and will resign.

MATTHEWS: You know, I worked on the Hill. As you know, Mr. Speaker, Willie Brown. You know, you are not supposed to make the come ad hominem comments about someone else. You saw the tape where he makes fun of Attorney General Holder by you are not my kind of witness. You are not a good witness. What's this? You get to be the teacher and you get to reprimand the student? I mean, the kind -- I have never seen it aimed at a cabinet member before.

BROWN: It really means you should not be given any opportunity to exercise power. Chris, when you receive the mantle of leadership on the power side, it automatically imposes up on you a higher level of responsibility than this congressman seems to be able to discharge. He's got to be somewhat of an embarrassment to his colleagues just by his heavy handedness.

MATTHEWS: Let me -- I want to you take -- give us a narration here. Darrell Issa, the attorney general, what's been going on here? How long has this been building?

HENDERSON: This has been building for months. As you pointed out, Darrell Issa was determined almost from the outset of him holding the gavel that he was determined to hold one member of the administration in some degree of difficulty because of their actions. He focused on Fast and Furious. Obviously this was-

HENDERSON: Fast and Furious was a gun-walking program where guns were purchased in the United States, taken across the border back to Mexico, and distributed by individuals who had no license or right to purchase --

MATTHEWS: And the idea was to track them.

HENDERSON: We were tracking those guns to find out where they went and hoped to buy the purchaser -- to get the purchaser as well as the recipient. It was started under the previous administration. General Mukasey actually had Operation Wide Receiver which was the precursor of Fast and Furious. It ended up with in the depth of officials who were involved with the U.S. government and ATF official, I believe, was killed. But this was a terrible operation. It should never have taken place. Much to his credit, Attorney General Holder ended the program, he disciplined ATF officials who were involved. He convened and -- inspector general to take a look at the issue. He testified over eight times with the Congress and he's provided thousands of documents-

MATTHEWS: And your theory is with this guy Darrell Issa, his goal is to push this further into rub the guy's face into it.

HENDERSON: Absolutely. And to force the attorney general to resign as a discredited official. Now, here's what's ironic -- there has never been an attorney general held in contempt of Congress. There's never been a vote by the House of Representatives on the contempt citation. To do it now against Eric Holder is to ignore all the facts of the case and to use a fiction to promote this kind of political agenda and I hope that both members of the Democratic Party as well as Republicans will see this for what it is.

MATTHEWS: I don't want to start too much forest fire here, but it is my instinct: Is this ethnic, Mr. Mayor?

BROWN: I think it has some ethnic flavor to it. It will be interrupted by some in that vein.

MATTHEWS: Well, I just did it because -- it smells like it to me and I think there is a disdain on the part of some Republican, not all. Certainly not Boehner. But some of them down in the rank and file, red hot end of the team, that do talk down to the president and his friends absolutely.