MSNBC Slimes NRA as Having 'Blood on Its Hands,' Is Responsible for 'Dead' Americans

MSNBC analyst David Goodfriend appeared on Tuesday's Dylan Ratigan Show to slime the National Rifle Association as having "blood on its hands." Goodfriend, who was only identified as a Democratic strategist in an onscreen graphic, accused the pro-Second Amendment group of killing people via legislation: "Americans are dead because of what the NRA has done."

Goodfriend's diatribe was labeled an editorial "rant" by MSNBC, but typical of the network's hateful tone. Goodfriend's proof? He cited the anti-gun, liberal Brady Center and shilled for donations: "Folks, please go to www.BradyCenter.org. You'll see a picture of George Zimmerman and a quote: 'I am the NRA.' Just above that, you'll see a donate button. Do it!" [See video below. MP3 audio here.]

Goodfriend's whole rant came in response to the Trayvon Martin shooting. The Democratic operative seemed to stress the gun issue over race. Yet, on Monday, MSNBC analyst Toure dismissed the "dangerous" Bill Cosby for doing the same thing.

It seems as though the network's hosts can't keep their memes straight.

Goodfriend co-founded the far-left Air America.  A transcript of the entire rant can be found below:

MSNBC GRAPHIC: Goodfriend Gets the Floor: Putting the NRA Under the Gun 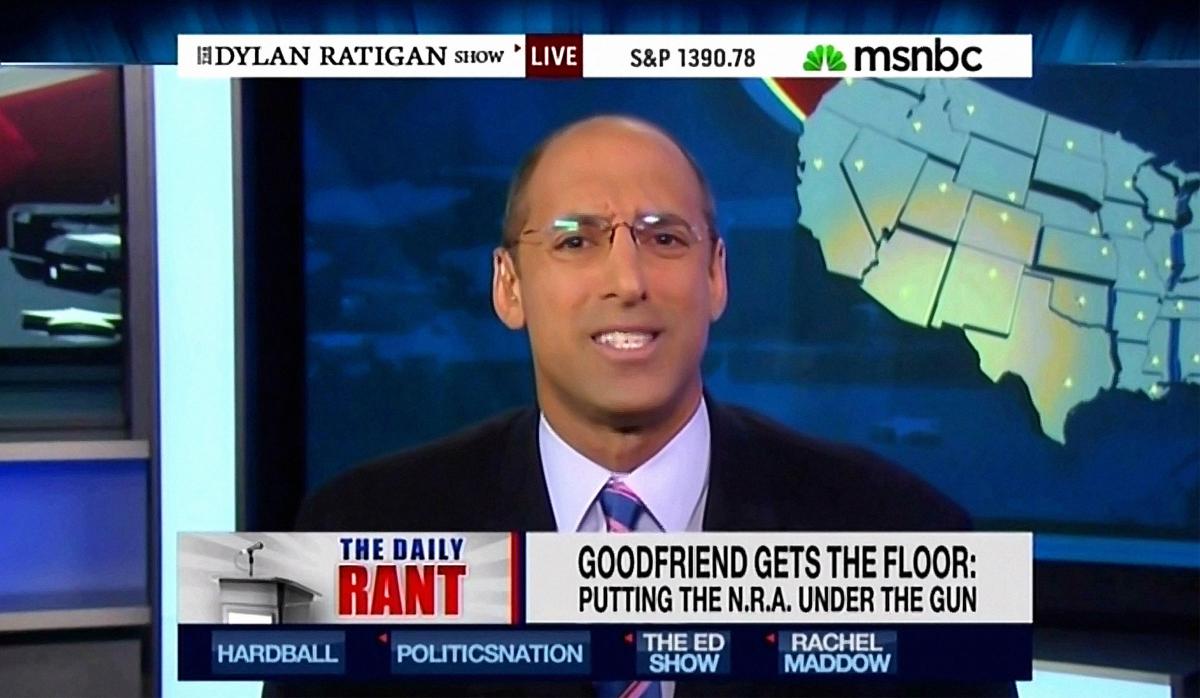 DAVID GOODFRIEND (Democratic strategist): You know, every time I get better at my anger management techniques, something flies out of the news, jabs me in the eye and sends me on a tirade. This past weekend it was the National Rifle Association's million-dollar CEO Wayne LaPierre. The guy gets up in front of his members and starts talking about the Trayvon Martin case. Is he upset that a gun-wielding vigilante just gave law-abiding gun owners a bad name? No. Is he concerned law enforcement will be set back by the Florida police department's total ineptitude? No. Wayne LaPierre is upset at the media. That's right, MSNBC! You heard him.

He's mad at you. Because with all the murders going on in the United States, he says that you focused on this one in order to jack up the ratings. Oh, the humanity. Now, wait a minute. That can't possibly be why the NRA has got its panties in a bunch. The NRA is sweating bullets because the nation is suddenly paying attention to Florida's stand your ground law that led to George Zimmerman not being arrested on the spot for murder.

And who lobbied for that stand your ground law in Florida and dozens of other states around the country? You got it, the NRA. So poor little Wayne LaPierre is scared. He sees major corporations dropping out of the conservative American Legislative Exchange Council over this issue and he's worried, worried that the NRA is next. Well, Lil' Wayne, you are right. You are next. Next on my anger management therapy bill. Because let's just say it right here and now to set the record straight: The National Rifle Association has blood on its hands. Americans are dead because of what the NRA has done. Now, how can I be so sure? Well, let's not even look at the stand your ground statutes that turned centuries of self defense common law on its head. Let's look at the Brady law. The criminal background checks before gun purchases,  the cop killer assault weapons ban, these are all policies that saved lives, and when the NRA fought to have them eviscerated, guess what? Lives were lost. I mean, don't take my word for it. Ask the Brady Center. You remember Jim Brady? He was Ronald Reagan's press secretary, shot in the head by President Reagan's hand gun-toting assailant. In fact, I'm going to do something that will make Wayne LaPierre have to hire his own anger management therapist. Folks, please go to www.BradyCenter.org. You'll see a picture of George Zimmerman and a quote: "I am the NRA." Just above that, you'll see a donate button. Do it! And I'll see you, Wayne, at our next group session. No guns allowed. Use your words.