It Begins: MSNBC Investigates Mitt Romney's Mormonism and How It Deals With Race

Although many members of the media downplayed the controversial aspects of Barack Obama's connection to the radical Jeremiah Wright, MSNBC on Tuesday began to investigate the Mormon faith of Mitt Romney and "its particular attitudes towards race."

Host Andrea Mitchell highlighted McKay Coppins of the liberal Buzz Feed. She quizzed her guest: "What challenges do you see for Mitt Romney as more and more questions will be asked along the way about his faith and its particular attitudes towards race?" 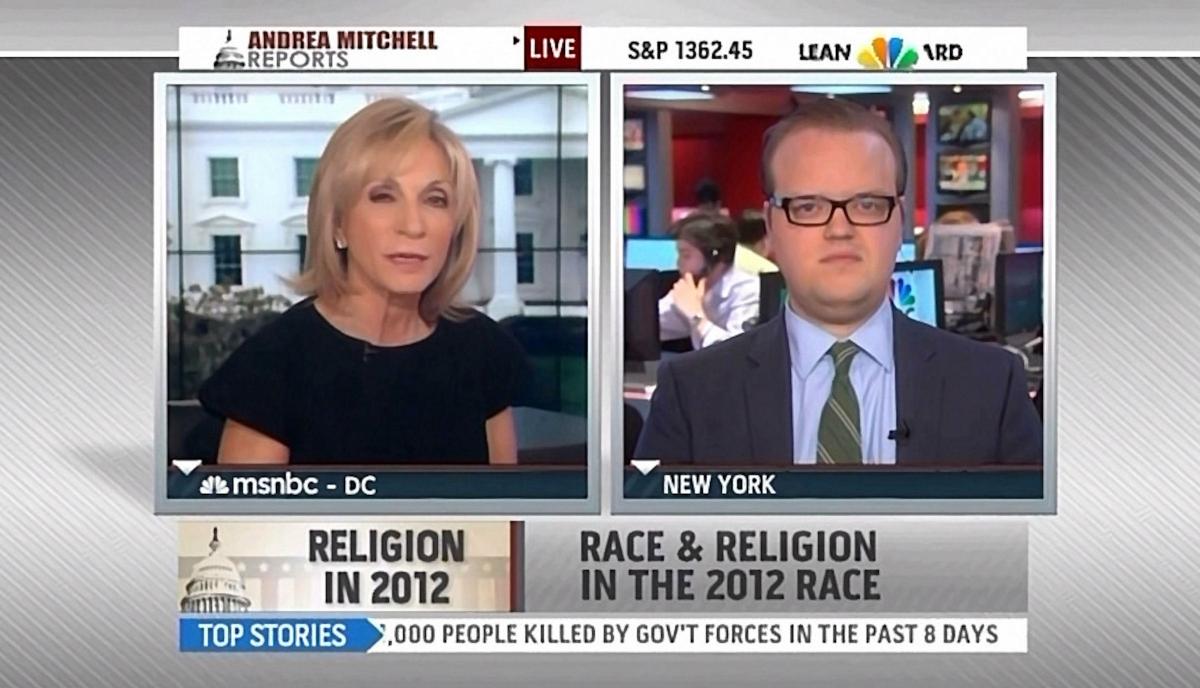 Coppins, who himself is a Mormon, wrote a piece on Romney's religion for Buzz Feed. He highlighted the fact that, until 1978, the Mormon church did not allow African Americans into the priesthood.

The journalist hinted, "...An increasing number of voices in the black community, are saying that Mitt Romney needs to speak out and condemn this because he was alive when these things were still being taught to him."

In his piece, Coppins cited a number of MSNBC regulars, including Marc Lamont Hill and Joy Ann Reid:

MSNBC analyst and Miami Herald columnist Joy Ann Reid — a prominent voice on race issues in a crucial swing state — said Romney deserves to be challenged on his church's past.

"I think if he were a child when anti-black policies were in place, that would be different," said Reid. "But he was an adult, active in the ministry of his church, and it's fair to ask, if the media cares to — and they should — what he thought of those policies at the time. The question is very much legitimate."

In 2012, look for the same journalists who, just four years ago, defended and dismissed questions about Barack Obama's church, to investigate Romney's faith.

A transcript of the April 10 segment, which aired at 1:43pm EDT, follows:

ANDREA MITCHELL: The November election bound to make history in at least one way, if, indeed, Mitt Romney, the nation's first Mormon nominee is on the ballot against the nation's first black American president. McKay Coppins is a reporter with Buzz Feed and has written extensively about the complexities of that scenario. And I should point out, because it is relevant, you are a Mormon yourself, member of the Church of the Latter Day Saints.

MCKAY COPPINS: I am.

MITCHELL: So, you come with a particular understanding of what the book of Mormon really reveals to us about the issue of race. It's a complex issue.

COPPINS: It is. Absolutely.

MITCHELL: What challenges do you see for Mitt Romney as more and more questions will be asked along the way about his faith and its particular attitudes towards race?

COPPINS: Yeah, well, the Mormon church for most of its history did not allow black men into the priesthood. That ban was lifted in 1978, but the church struggles with the legacy of discriminatory policies. There are also verses in Mormon scripture that teach that dark skin is a curse from an angry god and Mormon leaders used to teach that black people were less valiant or less righteous in a pre-mortal life. Now, none of these things are widely believed anymore in the church, but as I wrote at Buzz Feed an increasing number of voices in the black community, are saying that Mitt Romney needs to speak out and condemn this because he was alive when these things were still being taught to him.

MITCHELL: Let's take a look, also- Buzz Feed dipped down into the files and came up with these pictures. This is a very young Mitt Romney when his wife- when his wife- excuse me- when his mom Lenore was running for the United States Senate. It quite striking to see him, of course we've seen pictures of him with his sons but he- this was in the period when he was traveling and actually doing mission work for the church.

COPPINS: Yeah. This is an interesting clip. It's fascinating. For one thing, because you can see you know the political ideology that he was raised with, which was really pretty centrist and independent. He had two parents who bucked the Republican Party on issues like abortion rights and civil rights, and he was kind of raised to believe that, you know, you shouldn't always tow the party line. Obviously in the Republican primary this time around, we haven't seen much of that Mitt Romney and it will be interesting to see, going into the general election, whether he'll be able to pivot back to being kind of that independent centrist that his father was.

MITCHELL: McKay, help me with this. In the church, is there- is there an attempt at various stages to walk away from some of these more controversial, racial imperatives? I mean, is there something that would be the akin to what we understand to be an encyclical, where the Vatican, for instance, steps away from some of its past teachings regarding Jews?

COPPINS: Oh, absolutely. This presidential cycle in particular has been the catalyst for a couple of kind of definitive moments where the church has backed away from past stances, notably, recently, a BYU professor, Brigham Young University professor, gave voice to some of these old, sort of, racist teachings, and the church came out with an unusually strongly worded statement condemning them, saying these do not represent what this church believes, this doesn't represent our view on race and that was the definitive moment where the church kind of drew a line and said, you know, we're not going to be cast this way anymore, and we're backing away from these old teachings and these folk doctrines.