Who is Jake Tapper shilling for? The Obama administration or the Disney corporation? Over the two hours of Thursday's Good Morning America, there was not one mention of the administration's decision to reject the Keystone oil pipeline, costing at least 20,000 jobs. Yet, Tapper and ABC found time to promote both the administration's plan to create a "small world full of tourists who want to spend their money" and Disney World, parent company of ABC.

The segment, which featured clips of Beauty and the Beast and It's a Small World, included Robin Roberts gushing, "But, now, a big announcement about jobs from President Obama today." (She wasn't referring to Keystone, of course.) An excited Tapper enthused, "The President will announce this afternoon that he wants to make the United States the number one tourist destination in the world." [See video below. MP3 audio here.]

An ABC graphic fawned, "Be Our Guest: President's Going to Disney World: New Plan to Boost Tourism." Again, ABC is owned by Disney.

Tapper began the segment by informing, "We should, of course, disclose that Disney is the parent company of ABC News." 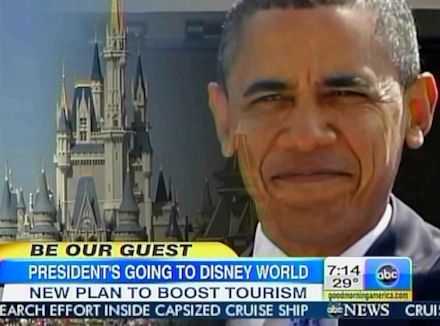 The entire tone of the segment was light-hearted and breezy. Tapper closed the piece by joking, "Of course, some bad news is that Malia and Sasha will not be here today. They will not be able to accompany their father, the President, when he comes to Cinderella castle, Robin."

Co-host Roberts lauded GMA's corporate bosses: "Thanks so much and have a magical day there at the kingdom!"

The two networks not owned by Disney, CBS (The Early Show) and NBC (Today), didn't cover Disney and the Obama administration's moves until the 8am and 9am hours, respectively.

The number of jobs Keystone would create is in dispute. CBS News reported that the U.S. Chamber of Commerce claims 250,000. Others say 20,000. Either way, it's amazing that a segment highlighting "a big announcement about jobs from President Obama" could ignore Keystone.

Tapper did cover the pipeline on Wednesday's World News. Anchor Diane Sawyer explained, "And today, a lightning bolt from the White House. Calling an end to the Keystone Pipeline, first proposed under the Bush Administration. It would be 1,700 miles, snaking through six states, from Canada to Texas, carrying oil, creating a lot of jobs."

To read a version of this article with a transcript, see MRC.org.

[Thanks to MRC intern Jeffrey Meyer for his assistance with this blog.]