"Good Morning America's" George Stephanopoulos on Thursday invited retired Supreme Court Judge John Paul Stevens to bash the audience of a GOP presidential debate. The ABC host repeatedly offered up softballs to the liberal Stevens, asking at one point, "I don't know if you saw it, but there was actually a moment in one of the presidential debates where's the number of executions in Texas was cited and the crowd cheered."

After cutting to a clip from the debate, Stephanopoulos prompted the ex-justice of the nation's highest court to offer a critique on a political party: "What did you think?" The segment also aired on Wednesday's "Nightline."

On the subject of the death penalty and judicial philosophy, Stephanopoulos uncritically wondered, "How did you evolve?"

He continued, "It seems like there may be another evolution now in the country that the case of Troy Davis, executed last week.  It appeared with the protests around that that the country may be heading towards a tipping point in another direction, against the death penalty."

Stephanopoulos, at least, explained for viewers that Stevens was a "Republican appointee" who "became a forceful leader of the court's liberal wing."

However, when a truncated version of the segment aired on the September 28 "Nightline," co-anchor Cynthia McFadden insisted that Stevens spent "decades of carefully balancing his every word ."

A full transcript of the segment was posted on ABCNews.com and shows even more adulation offered to Stevens. According to Stephanopoulos, dissents "like Bush v. Gore, like Citizens United, it seemed like your– your pen got mightier...over the course of your tenure."

A transcript of the September 29 GMA segment, which aired at 8:41am EDT, follows: 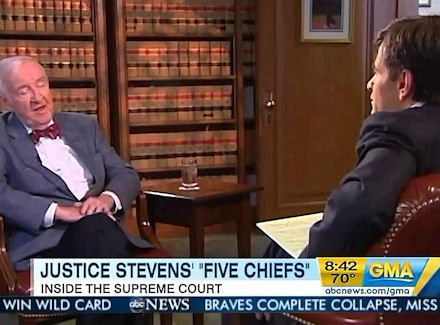 GEORGE STEPHANOPOULOS: Supreme Court Justice John Paul Stevens stepped down last year after more than 34 years on the bench, capping a remarkable tenure in which the soft-spoken Republican appointee became a forceful leader of the court's liberal wing. Now 91, Stevens has not missed a step, writing a new memoir, called Five Chiefs about the five chief justices he's known during an incredible career. We spoke this week at the office Stevens keeps at the Supreme Court. And I began by asking which of his thousands of his decisions makes Stevens most proud.

JOHN PAUL STEVENS: There are a lot of them and I really wouldn’t want to do any one of them over.

GEORGE STEPHANOPOULOS: Not one?

STEVENS: With one exception.

STEVENS: My vote in the Texas death case. I think that I came out wrong on that.

STEPHANOPOULOS: Back in 1976, when Stevens voted to uphold the death penalty. And one thing we've seen in Texas the proliferation of execution.

STEPHANOPOULOS:  I don't know if you saw it, but there was actually a moment in one of the presidential debates where's the number of executions in Texas was cited and the crowd cheered.

[Cut to clip of crowd cheering.]

STEVENS: I noticed that. Yeah.

STEPHANOPOULOS: What did you think?

STEVENS: I was– I was rather disappointed, because it– maybe one believes, as certainly a lot of people sincerely do, that it is an effective deterrent to crime and will in the long run will do more harm than good.  I don't happen to share that view.  But there are obvious people who do. Being hard on crime has been– always– is politically popular, let's put it that way.

STEPHANOPOULOS: You of course, became an outspoken opponent of the death penalty in your time on the court.  How did you evolve?  Can you summarize how your own views evolved?

STEVENS: Over the years, I was disappointed o find they expanded the category of cases, rather dramatically. And they also have relaxed procedures in ways that actually give the prosecutor advantages in capital cases that I don't think he has in ordinary criminal cases.

STEPHANOPOULOS: It seems like there may be another evolution now in the country that the case of Troy Davis, executed last week.  It appeared with the protests around that that the country may be heading towards a tipping point in another direction, against the death penalty.  Is that what you see?

STEVENS: I don't know.  I'm not a very good judge of public reaction on something like that.  But I think there always has been a significant group that felt that the penalty really wasn't worth it and caused more harm than good.

STEPHANOPOULOS: The Obama Administration chose not to seek a full appeals court review of whether President Obama's health care law is constitutional.  And again, I know you're not going to prejudge the issue without seeing the briefs.  But try to give us some insight into how a justice would think about that case coming before the court in a- in an election year.

STEVENS: I just think that you– you should put all that to one side.  If you've got a case to decide, just decide it on–

STEPHANOPOULOS: Just do it.

STEVENS: That's right. And I think that's part of the job of a judge.  If a case is there, the judge, the court has a duty to decide it.  I think they just have to decide it and not think about that particular consequence.

STEPHANOPOULOS: When you write about Justice Roberts, I'm struck, you obviously believe he's a man of great talent.

GEORGE STEPHANOPOULOS: One of the greatest oral advocates ever to appear before the court.

STEPHANOPOULOS: Yet you write that you would not give him a passing grade in the First Amendment.

STEVENS: Well, on a couple of cases.

STEPHANOPOULOS: One of them on a high profile ruling allowing the Westboro church to protest at the funerals of soldiers.

STEVENS: I thought the case involving the intentional infliction of emotional harm on a veteran at a funeral service, I thought the court got it wrong.

STEPHANOPOULOS: Justice Kagan, she replaced you. How do you think she's doing?

STEVENS: Wonderfully.  I guess I say that not only because I agree with almost every– every vote she's made, but she writes beautifully.  It made my resignation much easier to be replaced by someone like that.

STEPHANOPOULOS: Easier for a man who spent three decades on the court. And managed to not only  make legal history, but witness sports history. He was there at Wrigley Field, 1932, for Babe Ruth's called shot. You were joking, Mr. Justice, of all the things you've done in your life, this could be your claim to fame. You were at the game where Babe Ruth called it.

STEVENS: Absolutely. That's the one thing people will remember me for, no doubt about it.

STEPHANOPOULOS [points at Stevens score card from the day]:  There it is right there.

STEVENS: That's right. That was his second home run that day.

STEPHANOPOULOS: So, he really did it?

STEVENS: Oh, yeah. No doubt about it.