Although the Washington Post had no mention on Monday of the annual March for Life rally in Washington D.C., the paper still found time to devote 48 paragraphs and 2850 words to profiling Ron Reagan and his controversial claim in a new book that his father had symptoms of Alzheimer's while in the White House.

Staff writer Manuel Roig-Franzia made sure to highlight in the fifth paragraph, "The son, now 52, can't muster enthusiasm for present-day Reagan worship, either. He disdains the communal gushing and deifying, 'the fetishistic veneration,' while nurturing a private, though complicated, affection." [Emphasis added.]

The journalist added, "Ron's mother, Nancy Reagan, is always after him to attend this or that commemoration or unveiling. He always has the same reaction: 'Oh, no. Not another aircraft carrier. Not another bridge. Not another highway!'" 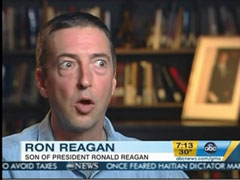 However, Roig-Franzia waited until paragraph 30 to note, "[Ron Reagan] worked as a television political commentator and radio host, but his show on Air America, on which he tended toward liberal flame-throwing, ended a year ago amid the talk radio network's bankruptcy."

The article concluded with a gratuitous shot at brother Michael Reagan, hinting that he's just attempting to cash in on the legacy of the 40th President:

Michael is also coming out with a new book timed to the centennial: "The New Reagan Revolution: How Ronald Reagan's Principles Can Restore America's Greatness." Among Michael's many Reagan-related enterprises is a company that sells e-mail addresses with the host name @Reagan.com for as much as $39 a year; the proceeds support conservative causes. He says he's sold between 4,000 and 5,000.

Ron has no such projects planned. He'll promote his book, then - well - who knows? "I'm still asking myself the question," he says, "about what I want to be when I grow up."

Roig Franzia did include critics of Ron Reagan's assertion that his father displayed symptoms of Alzheimer's while President: "Reaganites and Reagan watchers are reacting with varying levels of disbelief and rage. Edmund Morris, the biographer, says in an interview that he doubts the claim in part because Reagan's daily diaries are as "clearly expressed and well-written" at the end of his presidency as at the beginning."

However, Michael Reagan might not want to hold his breath waiting for his 2850 word, 48 paragraph profile.

Over a span of five days and three programs, ABC touted Ron Reagan's book for 24 minutes.