MSNBC's Contessa Brewer on Monday appeared baffled as to why more U.S. politicians weren't 'standing up' to demand the repeal of "Don't Ask, Don't Tell," touting it as "a civil rights issue."

In the span of two hours, the cable network featured a gay member of the military and a conservative to discuss the issue. It was hardly a case of hearing two sides, however. Both guests favored allowing homosexuals to serve openly.

Talking to Richard Grenell, a former spokesman for Ambassador John Bolton, Brewer editorialized, "It is a civil rights issue...Is it time for our American leaders to stand up for what's right and no matter what public opinion polls say to have the leadership and the courage to take a stand on it?"

Earlier, Brewer cited a survey sent out to service members asking them questions such as whether they'd be comfortable showering with an openly gay individual. The cable host dismissed, "Now, substitute in the word black or Jewish and would that question to service members ever be okay?...Why aren't more American leaders itching for a fight on gay rights?" [Audio available here.]

At the end of the segment, Brewer read viewer e-mail on the issue. Two such messages favored repealing Don't Ask, Don't Tell. These she recited without comment. When she read a letter disagreeing with gay rights, Brewer could hardly disguise her opinion: "Carolyn Bramblett says, "Homosexuality is a sin issue, not a civil rights issue.' Well, you know what Jesus said: 'Let he who is without sin.'"

In the 11am hour, MSNBC featured openly gay veteran Daniel Choi to dismiss the survey. Grenell is also gay. So, the network hardly sought out a variety of voices on the subject.

A transcript of the segment, which aired at 12:43pm EDT, follows: 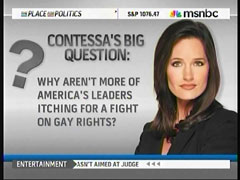 CONTESSA BREWER: Another traditionally safe [makes quotes marks] constituency for Democrats also angry, this time over a survey about the potential repeal of Don't Ask, Don't Tell, many say has incendiary and homophobic language. The President said he wants Congress to repeal the law and Pentagon is in the process of studying the issue.

But, a new survey sent out to service members asks questions that many find offensive. So, here's the problem: Critics say the survey assumes a position of homophobia. For instance, here's one of the questions: "If Don't Ask, Don't Tell is repealed and you are assigned to bathroom facilities with open bay showers with a gay or lesbian service member, would you take no action or use a shower at a different time?" 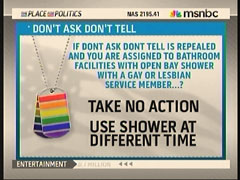 Now, substitute in the word black or Jewish and would that question to service members ever be okay? This is a pivotal civil rights issue. My big question today: Why aren't more American leaders itching for a fight on gay rights?

You can share your thoughts on Twitter, Facebook. You can get me on e-mail. Contessa@MSNBC.com We're going to have a lively discussion about this in the next half hour.

BREWER: A new Pentagon survey is stirring up the controversy because it asks very pointed questions about Don't Ask, Don't Tell. Some groups even suggest the survey uses homophobic language. 400,000 members of the armed forces got the question via e-mail asking questions about living with gays and using the same showers and same-sex couples in military housing.

The Pentagon is defending the questions. Rick Grenell is a conservative columnist, former spokesman to John Bolton and three other U.S. ambassadors and believes Don't Ask, Don't Tell should be repealed. We knew that the survey would happen.

Claire McCaskill, actually, Rick, brought up her concerns about how the questions would be framed. When public policy pollsters conduct surveys to gain credibility and validity they have to formulate truly open ended questions. Do you have a problem with these questions?

RICHARD GRENELL: Well, I think the key to this is having questions at all for a civil rights issue. What's most surprising is President Obama and Nancy Pelosi that they are actually trying to say that this isn't a civil rights issue, because clearly by having a questionnaire, they're not so sure themselves.

And I think the troubling thing for me and for a lot of conservatives is that they campaigned on this issue, that it was a civil rights issue and they were elected, they would end this. You know, when Barack Obama was a senator, he spent a lot of time telling people that it should just be taken care of with an executive order.

Now that he's president, the executive order excuse goes away and he's blaming Congress. So, I think it's really a difficult issue for the Democrats and they campaigned like it was an easy issue.

BREWER: So, to drive this point home and it's the argument that I made further, that if you put in instead of same-sex or homosexual and used, say, black, here would be the way the sample question would read.

"If a wartime situation made it necessary for you to share a room, birth or field tent with someone you believed to be- insert here black- service-member which are you most likely to do?" And goes on to how you take action. You're right. That question to service members would never be considered.

And, in fact, when they integrated the military, my understanding is there was no general survey taken to see how service members would feel about it. It was done because it was the right thing to do. That being said, after I asked my big question today, Rick, I got a bunch of E-mail responses in.

And you have people, viewers here who are writing and arguing that it's not a civil rights issue because being born black is not a choice but being born gay is.

GRENELL: Well, look, what I would say there is I'm a conservative. I think it's outrageous that we are spending so much money, $4.5 million alone on this survey to investigate someone's personal life. Whether you believe this is a choice, whether you believe that someone is born gay, I think it goes to the question of why are we wasting so much money to go after someone's personal life, to investigate? It's a national security issue when you're encouraging people to actually lie. I've held a top secret security clearance. They want to know everything about you. They want to know that you're truthful.

GRENELL: At the end of the day people have to remember that individuals in the military are already showering with gay military folk.

BREWER: And, again, regardless of what you think about homosexuality as an issue, that is like arguing you get to choose what religion you are as an adult and you still can't discriminate on the basis of that. I agree with you fully. It is a civil rights issue. Let's talk about the leadership here. Is it time for our American leaders to stand up for what's right and no matter what public opinion polls say to have the leadership and the courage to take a stand on it?

BREWER: Rick, thank you so much for joining us. I appreciate your time. I appreciate you weighing in. A lot of folks have been weighing in online about why our nation's leaders aren't embracing gay rights as is civil rights issue. Clinton Hancock responds, "The politicians are too fearful of their constituents. Sometimes you have to teach your constituents, not just listen to them.

Carolyn Bramblett says, "Homosexuality is a sin issue, not a civil rights issue." Well, you know what Jesus said: Let he who is without sin. Paul Heimsath writes, "It's 2010, people. This should not even be an issue." You can reach out to me. Let me know your thoughts.