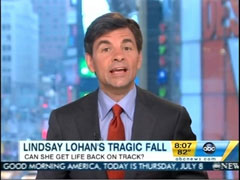 Over the span of two days, the network morning shows have given just 20 seconds of coverage to the recess appointment of Donald Berwick, a pro-rationing doctor who will run Medicare.

In contrast, Good Morning America, Today and Early Show devoted 52 minutes of coverage to every detail of Lindsay Lohan's sentencing.

On Wednesday and Thursday's GMA, ABC hosts discussed Lohan for 14 minutes. CBS's Early Show managed 12 minutes to the important topic. Both programs had no mention of Berwick, who once told an audience in Great Britain, "Please, don't put your faith in market forces."

NBC's Today, so far, has been the only morning show to mention Berwick at all. On Wednesday, news reader Lester Holt explained:

President Obama is expected to appoint his choice to oversee Medicare and Medicaid today, while Congress is in recess. This means Dr. Donald Berwick won't have to undergo Senate confirmation hearings. Republicans had wanted to question the Harvard professor and healthcare policy expert about comments he made on rationing medical care.

However, this 20 second brief hardly explains Berwick's comments, including this statement, also in Britain: "I hope you realize and affirm how badly you need–how badly the world needs–an example at scale of a health care system that is universal, accessible, excellent and free at the point of care–a health system that, at its core is like the world we wish we had: generous, hopeful, confident, joyous and just."

Today also allotted the most time to the Lohan story: 28 minutes over two days.

For more, see coverage at CNSNews.com.

Also see a blog by the MRC's Geoff Dickens for more on the lack of coverage.