MSNBC’s Chris Matthews on Tuesday night got visibly annoyed with radio host Mark Williams for daring to bring up the Hardball host’s famous assertion that Barack Obama gave him a "thrill" up his leg. After Matthews goaded Williams and suggested he didn’t know the name of the Republican leadership in Congress, Williams paraphrased, "Chris, you're making my legs tingle!"

Clearly, Matthews can dish out the insults, but can’t take any jibes of his own.

A transcript of the November 4 segment, which aired at 12:02am EDT, follows: 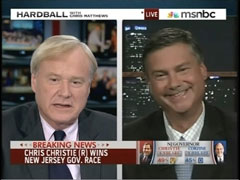 CHRIS MATTHEWS: Let’s begin with Willie Brown, the former mayor of San Francisco and radio talk show host Mark Williams. Both of you, first of all, let’s go through the headline of the evening, everybody’s going to see it, the double header, Virginia and New Jersey, the governorships, especially that nitecap in Jersey where the Democrat, Corzine, spent so much of his own money, his own wealth, both for the Senate race and later as governor and still got yanked out of there. I’ll give you the first joy of the night, Mark Williams, I know you are going to love to bite into this baby. So, go for it.

MARK WILLIAMS: Well, I think what you're seeing is the first two and a half victories of what's going to be serious change in this country's direction in 2010.

WILLIAMS: The half is we managed to blow out that fake Republican in upstate New York.

MATTHEWS: But, that race looks like, Mark, as we're speaking, it looks like the Democrat is ahead there

WILLIAMS: You know, I'll be happy if we walk away from that race with having slapped the Republican leadership that sat behind closed doors and selected a Working Family Party, ACORN party candidate and ran them as a token Republican. The number one problem we have in this country right now is we no longer have two parties representing two ideologies. And New York is a machine party state. You're seeing with neck and neck in New York City, too, I think you're seeing what happens when the citizenry becomes engaged and actually pays attention and goes out and votes their conscience. I don't think this is a Republican or Democrat thing, I think this is an ideological thing. People feel that their country and rights are threatened by oppressive atmosphere that they’re rejecting.

WILLIAMS: That’s not a wingnut line. Read the Constitution.

WILLIAMS: What black helicopter? We had massive turnouts in these elections, maybe 60 percent. That means people became engaged. They think for themselves.

MATTHEWS: Yeah. But the paranoia- what you're spewing now- What you’re spewing right now, you would have spewed 30, 40 years ago and a lot of people who believe it now would have believed it then.

MATTHEWS: This crazy paranoia of government.

MATTHEWS: Different point. Different point. No, see, I only went after you when you went into your what do you call it, boilerplate PR. Just stick to the facts then. And we will try to analyze these elections. You know your business. Lets stick to what happened last night and stop giving speeches. Mayor Brown-

WILLIAMS: I just told you what happened.

MATTHEWS: No, you went further, sir. And let’s stick to the facts.

MATTHEWS: Do you know the names of the Republican leaders of Congress?

WILLIAMS: I’m not going to single out one Republican leader.

MATTHEWS: I don’t think you know their names, Mark.

WILLIAMS: I will tell you for rank-and-file Republicans, they’re not being represented. Do you think, for example- Do you think-

WILLIAMS: Mark, you don’t know their names. You don't even know who you're talking about. Okay, let’s go.

WILLIAMS: Do you think that Harry Reid and Nancy Pelosi- I love trying to talk with you, Chris.

MATTHEWS: You know Democrats because you're always attacking them. By the way, his name is Mitch McConnell.

MATTHEWS: What do you mean?

WILLIAMS: I'm trying to have a serious conversation with you. I understand I'm a token, you know, the token on this show tonight.

MATTHEWS: No, there's always room for somebody like you on this show. I make my living on guys like you.