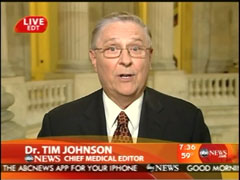 On Wednesday’s Good Morning America, co-host Diane Sawyer and Dr. Tim Johnson touted the treatment members of Congress get as an example of the unfairness of the health care system. Sawyer speculated, "The question is continually raised, in this land of equal opportunity, should all Americans have, do all Americans deserve the same access to health care that members of Congress have?"

Johnson, a well known fan of government-run health care, explained how, for a yearly fee of $503, representatives receive free access to X-rays, EKGs and minor surgeries. Talking to a Democratic Congressman who refuses to use this Office of Attending Physician (OAP), Johnson marveled, "In fact, [Steve] Kagen and his hundreds fellow members of Congress receive some of the best health care in the country, without even using insurance."

Johnson didn’t explain how, exactly, such a program could be extrapolated to the entire country. And only at the very end of the segment did Sawyer raise the issue of cost: Speaking of the representatives who partake in this service, she finally wondered, "Yes. So, good for you, that you have it. But make it the standard of care for everybody else, too. But, is that realistic, economically?"

What Johnson failed to mention is the fact that Democrats in Congress have voted against Republican calls that they themselves enroll in the so-called public option. After all, wouldn't that make sure representatives and Americans have equal care?

When asked by Sawyer why very few doctors or officials would talk about the OAP he replied, "I think they are embarrassed. Some of them, at least, by the kind of service they have and their constituents don't have." Of course, Johnson didn’t really go over how one would expand such a tiny program and still maintain the same level of quality or make it cost efficient.

On Tuesday’s World News lobbied for the public option: "One way or another, public option or regulation, the government has to play a role."

A transcript of the September 30 segment, which aired at 7:31am EDT, follows:

DIANE SAWYER: But, as this debate over health care continues to rage on month after month after month- by the way, the powerful Senate Finance Committee will have its health care reform bill hammered out as early as Friday. And the rest of Congress will begin to debate it- The question is continually raised, in this land of equal opportunity, should all Americans have, do all Americans deserve the same access to health care that members of Congress have? How good is that? Well, our chief medical editor, Dr. Tim Johnson, takes us behind some closed capitol doors.

REP. STEVE KAGEN (D-Wisconsin): Health care costs in this country, are impossible for everyone.

TIM JOHNSON: When Wisconsin Congressman Steve Kagan, an advocate for health care reform, needed knee surgery last winter, he paid for it out of his own pocket. That's because Kagan, a medical doctor, turned down the health insurance options offered to members of Congress.

CAMPAIGN AD: And refused coverage for himself.

KAGEN: I said, I tell you what. I respectfully decline. Until you can make that same offer to everyone that I have the honor of representing, I just don't think it's fair.

JOHNSON: But, while his surgery personally cost him thousands of dollars, Kagen says he paid nothing for the extensive rehab he needed. That was provided by the U.S. government. In fact, Kagen and his hundreds fellow members of Congress receive some of the best health care in the country, without even using insurance. And all right in the U.S. Capitol, at a little known and rarely discussed clinic called the Office of Attending Physician.

KAGEN: They have a small pharmacy. They have physicians and nurses that will see you on the spot, at the beck and call. And they have physical therapy available, which I took advantage of when I had my knee surgery.

JOHNSON: And I assume the members of Congress pays for this somewhat?

KAGEN: It's one of the, quote, benefits of being a member of Congress.

JOHNSON: How much of a benefit? For a flat $503 yearly fee, members of Congress have access to almost all of the care they could ever need, right behind this door. From exams and EKGs to X-rays and minor surgeries All provided by Navy doctors and nurses. Last year, about half of Congress paid the fee. And sources say, if a particular specialist is needed, one will be brought to the Capitol. All of this, for no additional charge.

JOHNSON: We wanted to talk to the attending physician on camera about these services. But our repeated requests for denied. And when we tried to visit the office, we were asked to leave. Dr. Eduardo Balbona is now in private practice. But, he spent two years as a staff physician in the '90s.

BALBONA: The customer service is excellent. A member walks in and generally walks right back into a physician's office. They're not rushed. They're examined thoroughly. Any task that is helpful, is done.

JOHNSON: In addition to serving members of Congress, the OAP also provides emergency care and first aid care for congressional staff and tourists at small clinics and ambulances located on Capitol Hill. The office talks publicly about those services. But rarely discusses the first item listed on its mission statement, providing primary care to Congress.

REP. LEE TERRY (R-Nebraska): We have a Cadillac plan.

JOHNSON: Representative Lee Terry of Nebraska doesn't use the office. But talked with us about it. This thing called the Office of the Attending Physician.

JOHNSON: Which you smile and say oh, yes. Why do you do that?

TERRY: Well, it's a great asset. Somebody passes out on a tour, it's our attending physicians that are there right then. But, there is an option. You can use them as your, in essence, family practitioner while you're here.

TERRY: I haven't explored it enough. I know that it exists. And it's a good deal.

JOHNSON: Terry is introducing a bill to offer the same federal health insurance options provided to Congress to all Americans.

TERRY: I'm sitting here thinking, if you're going to introduce this bill for the federal health plan, why not throw in something like this office, that is, provide primary care. If Congress can handle those kinds of things, why can't we?

TERRY: That's a fair question. And they should have that. Because, frankly, having a physician that you can call and contact, actually drives down the costs.

JOHNSON: Again, we couldn't ask the office about this idea because it refused our interview requests. In fact, getting anyone to talk about the office was difficult. Some former staff were willing to talk off camera. But said they would get in trouble if they appeared on TV. In the end, only Dr. Balbona would agree to sit down with us because, he says, the office serves an important service.

BALBONA: It's not a political perk. Much like a medic who’s in combat, It's not a perk to the soldiers. It's part of the mission.

SAWYER: And bringing in our medical editor, Dr. Tim Johnson from Washington D.C. Tim, the unwillingness to talk about this says it all.

JOHNSON: Well, I think it does. I think they are embarrassed. Some of them, at least, by the kind of service they have and their constituents don't have. And more importantly, Diane, I really worry that this kind of readily available care at a very low fee, desensitizes them to what the rest of the country struggles with in trying to find primary care. We can do all we want to increase coverage. That’s a good idea. But unless we increase primary care availability, people will have insurance and won't be able to get a doctor. So, I hope these people will think about what they have. And say we have to have something like it. Not necessarily the exact thing. But we have got to have in our bills, improving primary care. Having more primary care available to our constituents.

SAWYER: Yes. So, good for you, that you have it. But make it the standard of care for everybody else, too. But, is that realistic, economically?