NBC's Ann Curry Gushes: 'Who Are We Going to Be' Because of Obamas? 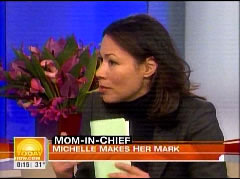 On last Friday's "Today" show, Ann Curry interviewed two magazine editors on the subject of Michelle and Barack Obama and rhapsodized over the effect the power couple could have on America. Speaking to the creative director of Ebony magazine, she fawned, "The question I think, really, ultimately, is who are we going to be because of them? Who are we going to be as a nation?"

In a set-up piece to the segment, NBC reporter Norah O'Donnell described how the first lady, during ceremonies in the days after the inauguration, personally greeted Americans at the White House. She extolled, "In fact, Michelle Obama is slowly reinventing the traditional role of the President's wife, bringing her own version of change to the White House." O'Donnell also seemed impressed with the reports that Barack Obama no longer requires a tie and coat in the Oval Office. She touted, "And things just seemed more casual around the White House. The President without a jacket in the Oval Office. The first lady sporting J. Crew."

Several magazine editors were featured doling out effusive praise for the first couple. Essence magazine's Angela Burt-Murray spun, "This is the people's first lady. This is someone who is very much connected to the everyday struggle of American families." 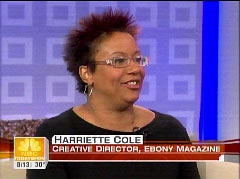 Later, Curry spoke to Harriette Cole, the aforementioned creative director of Ebony magazine. After asking a question about the style of the Obamas, Cole cooed, "They are the President and first lady of the people." After Cole asserted that the family has, thus far, balanced the White House and home life well, Curry stated the possible benefits of the Democratic couple for Americans: "Maybe we'll have much more respect for people who do need to have that [work/family] struggle with that balance."

MRC intern Mike Sargent spotted the two segments and provided this transcript: It aired at 8:11am on January 30:

ANN CURRY: First Lady Michelle Obama's bringing her own sense of style to the White House, and on Thursday, she hosted her first official event at the White House. Here's NBC's Norah O'Donnell.

NORAH O'DONNELL: After all the glitz and glamour of inauguration, it's now down to business. For the first time since her husband's big day, Michelle Obama stepped into the spotlight, joining the President at his first bill signing.

PRESIDENT OBAMA: Equal pay is by no means just a women's issue.

O'DONNELL: Equal pay is a cause near and dear to the first lady's heart.

MICHELLE OBAMA: This legislation is an important step forward, particularly at a time when so many families are facing economic insecurity and instability.

O'DONNELL: She campaigned on the issue.

M. OBAMA My primary title, as far as I'm concerned, mom in chief.

O'DONNELL: And now plans to lead on it.

ANGELA BURT-MURRAY (Essence Magazine): This is the people's first lady. This is someone who is very much connected to the everyday struggle of American families.

O'DONNELL: That will no doubt shape America's history.

M. OBAMA: Just don't break anything. That's what I try to tell my kids.

CURRY: So, just what is the first family doing behind the scenes at the White House? Well, Larry Hackett is the managing editor with People magazine and Harriette Cole is the creative director with Ebony magazine. Good morning to both of you. Want to give you both your due with your magazines. Because you both have major articles on the Obamas. You have a major spread this week. I guess the question is, when you look at this new sense of style -- and for many people, I suppose one might say it would be incredibly refreshing, but on the other hand, it must be a nightmare for the Secret Service. Because there is a kind of connection. You're seeing it, aren't you?

HARRIETTE COLE: Yeah (Creative director, Ebony magazine). They are the President and first lady of the people. They said that when they were running for election. You know, there aren't the PACs. It's the 50-plus million people --

CURRY: You spoke to the First Lady's office yesterday. What were you able to glean?

COLE: Well, just that sense of inclusiveness. They don't want it to be us and them, as we saw on the tape. They invited people into the White House the first day after inauguration. They also had a meeting with the White House staff, everybody on the staff, from the florists to the plumbers to the people in the kitchen. Michelle Obama did. To talk to them to introduce herself to each of them and to meet them to say we are one family.

CURRY: Larry, you've covered Presidents and Presidential families for many years, you've been with "People" for what, 15 years? What is your sense about this change in the style that we're seeing?

LARRY HACKETT (managing editor, People): Well, it's a very tricky thing to go through and they have done so far very well. They have had these meetings with the staff and they've said we want to invite you all over to have pizza. They indicated they want to takeoff- no-tuxedoed staff anymore,to get a sense of relaxation. On the other hand, it's the White House, and people don't want them to be just an ordinary family living in a split level. They have to kind of balance it, make it casual, make it their own. They obviously have two small kids, but this is the White House, the President's House. So to strike that balance is difficult. Thus far they've been doing a terrific job I think.

CURRY: In fact, you bring up a good point, because the Bush formality was in reaction, to some degree, the informality of the Clinton White House in which the President was walking around in t-shirts.

HACKETT: Absolutely. You saw the jacket ping pong. The Clintons walked around in golf gear in the White House, and then the Bushes went back to the old Reagan model, which is that you always had a jacket on. Now Obama has gone back to no jacket.

COLE: It's a crisp white shirt, though.

CURRY: You talk about- We've seen now the bust of Michelle Obama is at the wax museum, it's being made, as we just saw now in the piece. There is no question that they have arrived. The question I think, really, ultimately, is who are we going to be because of them? Who are we going to be as a nation? What is your sense about Michelle Obama's impact, very quickly on this country?

HACKETT: Absolutely. It's the work-life balance that thus far in a week and a half that they have struck, and I think it's terrific.

CURRY: Maybe we'll have much more respect for people who do need to have that struggle with that balance.

COLE: And they have great manners. I think that's something that they're reminding us, that it's important to really show that.

CURRY: Well, you show good manners to be with us. Larry Hackett, Harriet Cole, thank you so much.