On Friday's program, reporter Andrea Canning played a clip from Beatie's appearance on Oprah Winfrey's daytime program and then approvingly described him as "the man the world has been waiting to meet." While discussing the issue on March 26, co-host Chris Cuomo tentatively asked an obstetrician, who approved of the pregnancy, if there were any psychological implications for the child. After being told that only love was necessary, Cuomo quickly concurred and added, "It's a good point to make, doctor. Oddity aside, biology aside, it is all about love of this child and as long as that's present, everything else is really going to be normal."

Finally, as the Culture and Media Institute's Kristen Fyfe pointed out in an April 3 posting on the subject, GMA and other shows insist on referring to Beatie as a pregnant man. Of course, this ignores the fact that men simply do not give birth.

A transcript of the April 4 "Good Morning America" segment, which aired at 8:04am, follows: 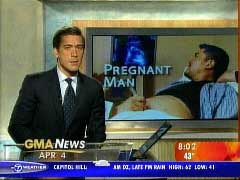 DAVID MUIR: We are learning more this morning about the Oregon man who is now six months pregnant. He and his wife are going public with their very controversial decision to have a child. Here's ABC's Andrea Canning.

THOMAS BEATIE [at hospital]: She's kicking. I can't believe she's inside me.

CANNING: It's an incredible sight. The first images of pregnant dad, Thomas Beatie laying on an exam table, looking at his unborn daughter on an ultra sound as Oprah's cameras capture it all.

BEATIE: Now that we know the pregnancy is healthy, these are tears of joy.

CANNING: The man the world has been waiting to meet appears in People magazine today and opened up to Oprah on Thursday.

BEATIE: I feel it's not a male or female desire to want to have a child, it's a human desire.

BEATIE: And I'm a person and I have the right to have my own biological child.

CANNING: Thomas is a transgender male who conceived with artificial insemination. His wife Nancy actually performed the procedure herself at home with a syringe. They acknowledge their situation is controversial, but stress their daughter will be raised in a traditional home.

CANNING: For now, the Beaties say they are just taking the challenges of their bizarre new life right now.

BEATIE: This is what they look like now. This is all I can do. Unfortunately they don't make man maternity clothes so I'm kind of stuck.