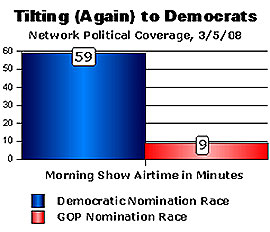 Despite the fact that John McCain officially clinched the GOP nomination on Tuesday, the three network morning shows on Wednesday devoted almost a full hour of air time to covering the Democratic presidential race and barely nine minutes for the Republicans. Additionally, the Arizona senator did not appear on NBC's "Today" show, ABC's "Good Morning America" or the CBS "Early Show." Democratic Senators Barack Obama and Hillary Clinton, however, showed up on all three programs.

The network morning shows featured the Democratic presidential candidates for a grand total of 59 minutes and 12 seconds. McCain and his remaining rival, former Arkansas Governor Mike Huckabee, received a mere nine minutes and ten seconds of coverage. Now, obviously, the Democratic race is a close, hard fought contest. So, it's natural that it would receive more attention. However, McCain's very act of winning the nomination should be a well covered event, especially considering the candidate's remarkable rise from the political dead. The networks, apparently, saw it a different way.

In addition to lack of coverage, all three programs featured early stories on Clinton and Obama first and buried McCain coverage at the end of the 7am hour or later. "Good Morning America" didn't get to McCain until 7:30. The "Early Show" waited until the 8am hour to focus on the senator.

On "Good Morning America," while not interviewing McCain, co-host Diane Sawyer found time to pose particularly frivolous questions to Obama. She twice asked whether the senator would like to go back on "Saturday Night Live" and closed the segment by gushing, "On a personal note, because it is always a family campaign as well, what did Mrs. Obama say to you last night?"