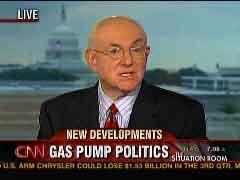 In a September 15 report for "The Situation Room," CNN reporter Bill Schneider wondered if the current decrease in gas prices has been timed to help Republicans in the midterm elections. He ominously asked:

Schneider: "The drop in prices may last a couple of months, long enough to get through the November election. Could that be what the oil companies want?"

Does this mean that high prices in the spring and summer were an attempt to hurt the Republicans? This theme, that oil companies are trying to aid the GOP, was repeated or insinuated throughout the report. In the segment, which aired at 4:40PM, anchor Wolf Blitzer introduced Schneider by noting that a form of smog reducing gasoline will be pulled "as we head into the fall and the November elections." Schneider then prefaced a sound bite from a "oil industry critic" by stating:

Schneider: "But this oil industry critic believes that what drove prices up was speculation and a report from a bipartisan congressional investigation may be having an impact."

The critic, Tyson Slocum, is a member of Public Citizen, a liberal consumer advocacy group founded by Ralph Nader. The group’s left-wing ideology is not mentioned, the only ID onscreen is of the organization’s name. At this point, Schneider asks the question: Do oil companies want prices down through the midterms? Slocum elaborated for him:

Slocum: "Eighty-one percent of their money goes to members of the Republican Party. I cannot say for sure whether or not they are influencing prices to assure that outcome, but it is, I think, more than just a coincidence that we're seeing an easing of prices at a time of running up to a very, very important election."

This isn’t the first time CNN has conjured up dark conspiracies involving the GOP and "big oil." And it will undoubtably not be the last