Ex-CBS News President to Media: Be 'Honest' With Your 'Embrace of Bias' 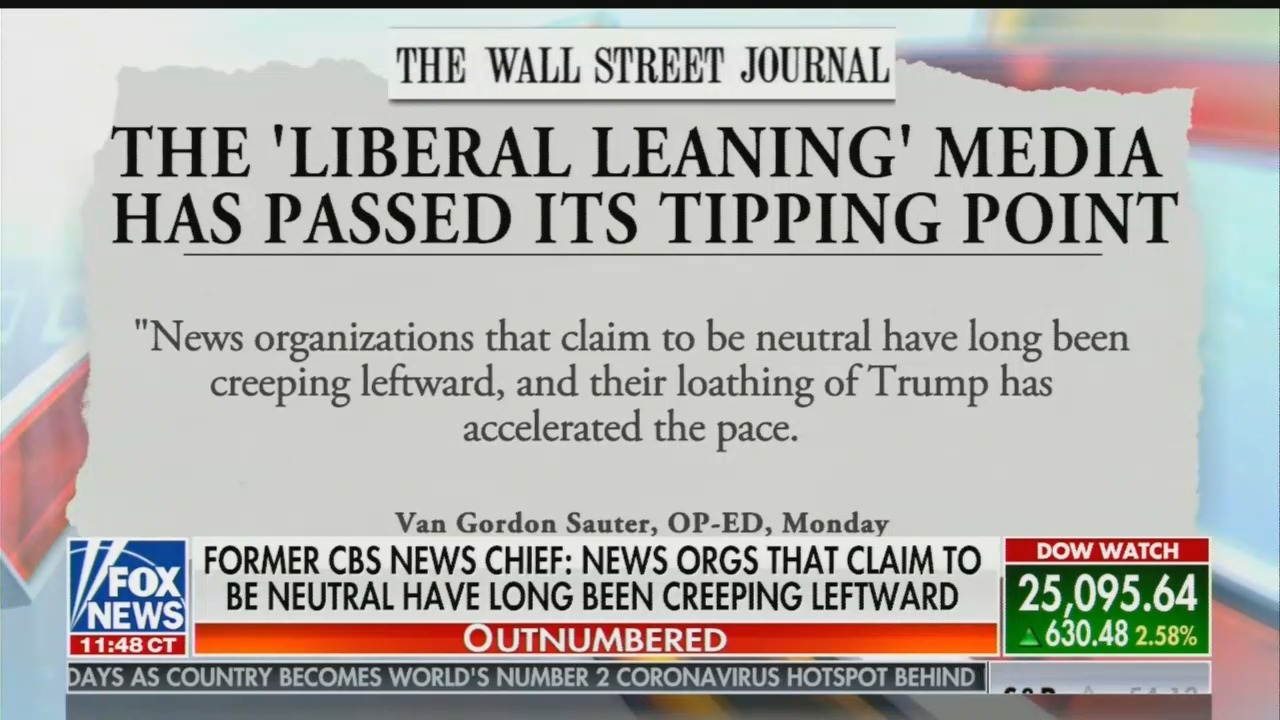 Three months ago, Former CBS News President Van Gordon Sauter appeared at a California forum and declared that “liberal bias is increasingly embedded in the journalism as a result of the Trump experience and it’s accelerating and deepening the wedge in our society.” Sauter doubled down on his analysis in an op-ed for The Wall Street Journal Monday; titled “The ‘Liberal Leaning’ Media Has Passed Its Tipping Point.” In addition to pointing out the obvious, Sauter urged the media to openly embrace its liberal bias, rather than hide behind the pretense of objectivity.

Sauter began the piece by paraphrasing the points he made at the aforementioned forum back in February: “News organizations that claim to be neutral have long been creeping leftward, and their loathing of Mr. Trump has accelerated the pace. The news media is catching up with the liberalism of the professoriate, the entertainment industry, upscale magazines and the literary world.” Sauter had touched upon the consequence of the “liberalism of the professoriate” at the forum, noting that “our colleges, which are dominated by liberals, liberal professors, are churning out these students who never hear another opinion.”

In his Wall Street Journal op-ed, the former CBS News President proclaimed that “to many journalists, objectivity, balance and fairness—once the gold standard of reporting—are not mandatory in a divided political era and a country they believe to be severely flawed.” He also lamented the fact that “much of journalism has become the clarion voice of the ‘resistance,’ dedicated to ousting the president.”

Ultimately, Sauter predicted that not much will change with regards to liberal media bias because “the media likes what it is doing. Admires it. Celebrates it. There is no personal, professional, or financial reason to change.” The reason for the lack of incentive to change stems from “dominant media organizations” bonding with the left and making the calculation that “pulling back from anti-Trump activism could prove commercially harmful.”

Sauter predicted that if Trump wins re-election, many Americans will never “put public stock in journalism it considers hostile to the country’s best interests.” Sauter quoted from Mediaite founder Dan Abrams, another attendee at the forum he attended in February, who argued that “the first thing that would help...is to admit...that the people in the media are left of center.” Agreeing with Abrams, Sauter declared that “It would be delightful if a publisher, an editor, a reporter would just say: Yes, I am left of center! I’m proud of it. I think our reporting is accurate. It best serves the public. And the credibility of the media. So there!”

As his piece concluded, Sauter explained that “Journalism affects social cohesion. Convinced of its role and legitimacy, however, the media doesn’t seem to much care.” Circling back to his observation that media bias has deepened the wedge in American society, Sauter remarked that “America won’t reunite until far more people can look at a news story in print or on the screen and, of all things, believe it.”

Here's what Sauter said in February, as noted by the MRC's Brent Baker:

“And I think at some point the editors, the producers, are going to have to deal with this because if we go in the next year or the next five years with the circumstances we’re in today, the conservatives – and believe me Fox is a very thin sliver of the conservative audience out there – they’re going to be lost. And we need journalism, which is so clear and conscientious that the left and the right can find a credible place to believe they’re getting the straight story. If you don’t have that, it’s over.”