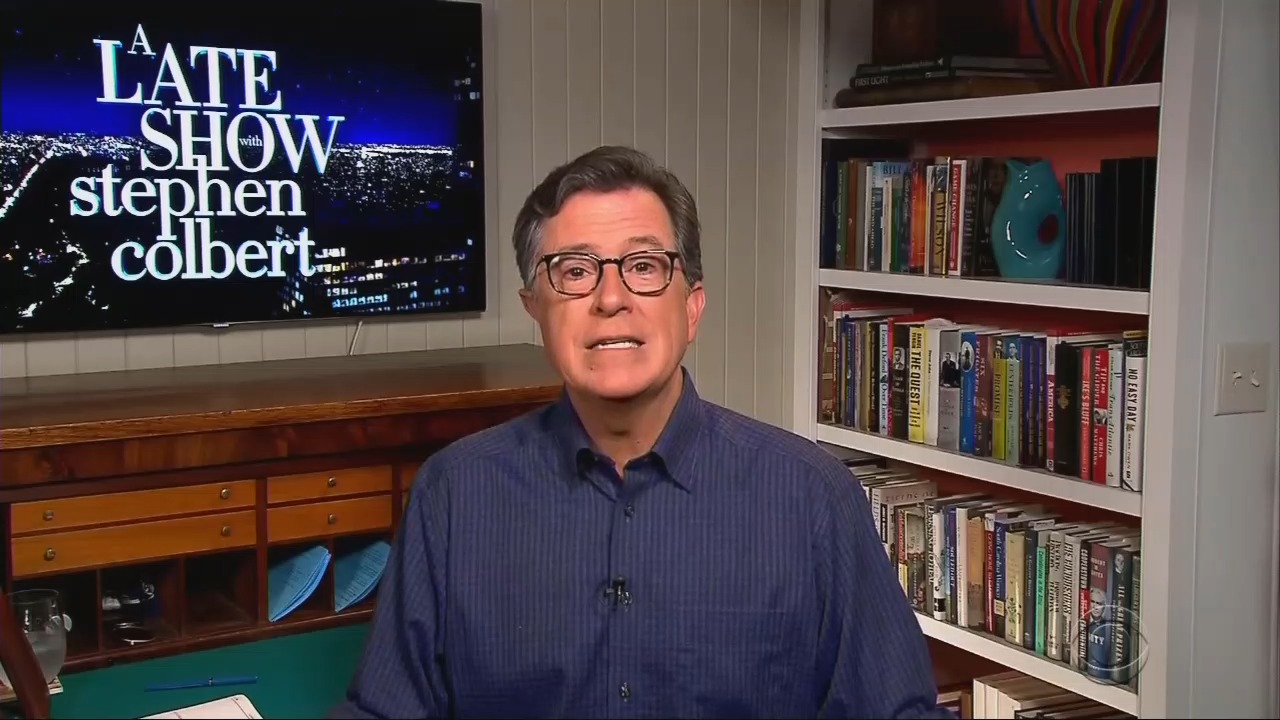 While The Late Show host Stephen Colbert may not have an enthusiastic studio audience cheering him on as he delivers anti-Trump punchlines for the time being, that has not stopped him from going out of his way to please his Trump-loathing viewers. The comic on Monday accused Trump of “willfully endangering the lives of Americans” by encouraging the reopening of the economy and claiming that Vice President Mike Pence’s head was “somewhere around Trump’s butt.”

Colbert’s opening monologue featured multiple clips from President Trump’s town hall on Fox News, which took place the night before. One such clip featured Trump expressing a desire to see Americans resume visiting beaches and parks, as long as they comply with social distancing. According to Colbert, “He is willfully endangering the lives of Americans” by urging for the reopening of the economy and a return to normal life. In an effort to back up his position, Colbert cited a New York Times article claiming that “Trump Administration Models Predict Near Doubling of Daily Death Toll by June.”

The CBS host also took a shot at Vice President Mike Pence for claiming that after Coronavirus subsides, “we’re going to have one of the best years in the history of our economy.” Following the conclusion of that video clip, Colbert asked “Mike Pence, where do you find the courage?” Colbert proceeded to answer his own question: “I assume somewhere around Trump’s butt because that’s where your head is. Right there in the old bravery crack.”

Borrowing from the playbook of his colleague Norah O’Donnell, Colbert spent the latter portion of his monologue jumping to China’s defense; lamenting the President’s “blame China initiative.” Attempting to absolve the communist country of any culpability whatsoever, Colbert ridiculed the “unsubstantiated claims that (Coronavirus) started in a laboratory in Wuhan.” Colbert proceeded to suggest that Trump told Secretary of State Mike Pompeo to “lie to Martha Raddatz like you’ve never lied before” by telling her there was “enormous evidence” backing up what Colbert described as a “conspiracy theory.”

As his opening monologue came to a close, Colbert talked about the arrival of deadly Asian “murder hornets” in the United States. Sharing a description of the hornets as having how they have a “huge yellow-orange face.” With that description in mind, Colbert proclaimed: “I’m being told we have a picture of their queen.” At this point, he put a picture of the President on screen, remarking “hideous.” Even as coronavirus and now, murder hornets, threaten the lives and health of the American people, Colbert apparently still believes that the # 1 threat the United States faces is President Trump.

A transcript of the relevant portion of Monday’s edition of The Late Show is below. Click “expand” to read more.

STEPHEN COLBERT:  While public health officials are worried, one person isn’t that concerned: Donald Trump. He had a Fox News virtual town hall last night and he said it was time to hit the beach.

COLBERT: “I don’t get it. No matter how many times I tell states to reopen and people to party on the beach, the number just keeps going up. I mean, if this doesn’t stop soon, I’m going to have Dr. Fauci throw a public health kegger.” Now, no surprise, Trump is lying. He’s willfully endangering the lives of Americans and we know this because The New York Times acquired an internal government memo showing Trump administration models predict a near doubling of the daily death toll by June, proving that reopening the economy will put the nation right back to where it was in mid-March. Mid-March! That means infection rates will skyrocket, everyone will have to go back inside, and Americans are going to have to find a new animal-exploitation, true-crime drama to watch. That’s why I’m releasing my new show, “Walrus Duke.” Now, Trump believes that getting the economy moving is, at this point, the only way he can get re-elected, so he’s going to try to do it, no matter what the risk is to Americans. I haven’t seen a campaign strategy this dangerous since William Henry Harrison’s “Tippecanoe and a Scorpion Down Your Pants.” Now, you may have noticed from that footage I showed you that Trump’s virtual town hall was held at the Lincoln Memorial. The choice of that venue sparked some criticism, which Bret asked Trump about.

BAIER: What do you say to people who say this is not right venue for this?

PRESIDENT TRUMP: Do you know I didn’t know that it was creating criticism, and I did say this would be nice, but I thought it was your choice, not ours.

COLBERT: “This was totally your choice. I had nothing to do with us being here. And while we’re on it, Bret, why didn’t you do more about coronavirus testing? I can’t believe you told people to drink bleach and that you cheated on your wife with a porn star. You are one sick puppy and it’s a pleasure to be here, thank you.” Social distancing guidelines already made the set-up look kind of weird. It didn’t help that Trump and the hosts sat on chairs from “Regis and Kathie Lee.” Now, anyone who has ever sat in one of those tall chairs knows you can’t get up into it without some scooching. Fox News, I demand that you release the unedited scooch footage! What was the President’s strategy? Did he get one ass cheek up and then wiggle back and forth? One big hop and then a slide that sort of moves the whole chair go back? Was he lowered in by block and tackle? The American people deserve to know! The town hall was supposed to be about reopening the country, and it was entitled, “America Together: Returning to Work.” And Trump not only thought that the returning to work would happen soon, he thought this disaster might actually make things better.

COLBERT: Really?  A better job with more money. So, it’s kind of good that you ignored the virus? “I think this is going to be even better because the pigs that just flew out of my butt told me they’re hiring, so that’s a positive.” And it’s not just the unemployed. According to Trump, everyone’s going to be better off.

VICE PRESIDENT MIKE PENCE: I agree with the President, I think we’re going to have one of the best years in the history of our economy.

COLBERT: Mike Pence, where do you find the courage? I assume somewhere around Trump’s butt, because that’s where your head is. Right there in the old bravery crack. Now, Trump’s been trying to blame China, he hasn’t been trying, he has been blaming China for how Trump ignored the threat of the virus for months in the United States, and he was asked how he plans to retaliate against them.

BAIER: Are you considering new tariffs on China as a sort of a punishment for their handling of the virus?

PRESIDENT TRUMP: Well, it’s the ultimate punishment, I will tell you that.

BAIER: You have experts who look at…

PRESIDENT TRUMP: I don’t like… again, I don’t like to tell you what I’m…because, you know, we’re all playing a complicated game of chess or poker. Name whatever you want to name. But it’s not checkers, that I can tell you.

COLBERT: “It’s not checkers, that I can tell you. It’s called chess or poker, and here’s how she works: Each player gets five cards, two bishops, and one rook. Do anything you want as long, and I cannot stress this enough, it’s not checkers. The goal of the game is...I have no idea. I’m really more of a checkers guy. I keep screaming ‘somebody king me’ and nobody will.” Trump says he wasn’t warned. We just found out that Trump received intelligence briefings on coronavirus twice in January. But Trump had an explanation.

COLBERT: Wait, let me write that down. “To solve the virus, get rid of the virus.” Wow, what a genius. It reminds me of Einstein’s famous equation, “E equals E.” As part of his blame China initiative, Trump’s been pushing unsubstantiated claims that the disease started in a laboratory in Wuhan. And yesterday, his conspiracy theory got the support of Secretary of State Mike Pompeo, seen here doing his de Niro. Pompeo sat down on This Week this week and told host Martha Raddatz that he believes Trump’s theory.

MARTHA RADDATZ: Mr. Secretary, have you seen anything that gives you high confidence that it originated in that Wuhan lab?

COLBERT: “In fact, I saw the enormous evidence this morning and it said, ‘Mike, I need you to go lie to Martha Raddatz like you’ve never lied before.’”