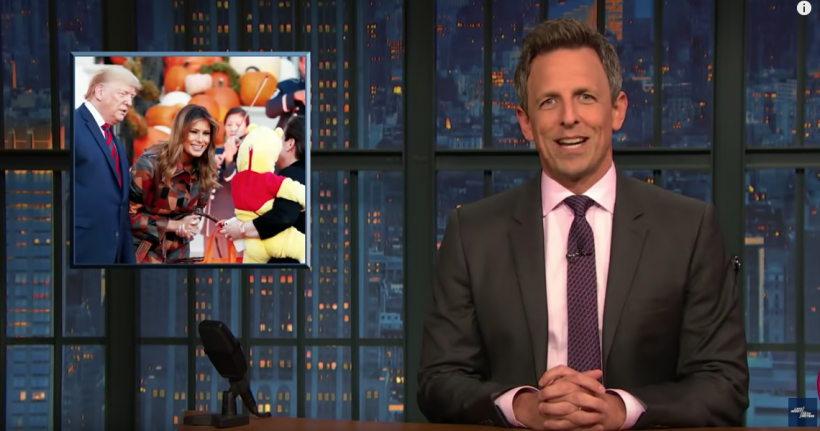 As NewsBusters has previously reported,  Seth Meyers’ new Netflix stand-up special, entitled “Lobby Baby,” has a button that allows viewers to fast-forward through the Trump jokes. According to Kevin Fallon of The Daily Beast, “you shouldn’t” because “that means skipping the exact thing he does better than anyone.” The anti-Trump Fallon devoted an entire article to explaining how “Seth Meyers Does Trump Jokes Better Than Anybody.”

Fallon’s write-up about Meyers’ Netflix special reads like a love letter to the anti-Trump comedian and Saturday Night Live alumnus. Fallon begins the article by saying “I’ve always appreciated how interested Seth Meyers is in my mental health.” The Daily Beast Senior Entertainment Reporter cited Meyers’s “Closer Look” segment to back up his claim that the Late Night host actually cares about his mental health; concluding that in the segments, Meyers basically says, “Take a deep breath, Kevin, you’re not insane.”

Picking up on his admiration for Late Night’s “Closer Look” segments, Fallon described Meyers as “the best late-night host when it comes to addressing, on a daily basis, the fever-dream demented acid-trip dystopian nightmare of the Trump presidency.” Fallon also made sure to give shout-outs to other left-wing activists masquerading as comedians; noting that he admires “Stephen Colbert’s righteousness and Samantha Bee’s gasket-blown anger.”

At this point, Fallon informed those put off by “the domination of Trump and political content in his material” that “Trump jokes only amount to less than 10 minutes of the set,” adding “your sanity is of the utmost importance to Seth Meyers, so he has figured out a way for you to skip them.” Fallon proceeded to editorialize: “You shouldn’t! They’re great.”

In an effort to convince readers to indulge Meyers’ anti-Trump commentary, Fallon shared some of the Trump jokes told by Meyers in “Lobby Baby.” During the Netflix special, Meyers acknowledged that many people ask him “When are the jokes about Donald Trump going to stop?” Meyers responded to that question by describing the jokes as “the only good thing about living through the Trump era.”

Responding to people’s insinuation that the Trump era “must be so good” for him, Meyers explained how he hates “having people feel as though I’m benefitting from this.” The liberal comedian compared himself to a “gravedigger in the Middle Ages” with people saying to him “this plague must be so good for you.” Meyers compared Trump to the plague: “obviously we’re very upset about the plague, but it has been very good for business.”

As the article came to a close, Fallon circled back to his declaration that Meyers has improved his mental health by describing him as his “comedy spirit guide through the gauntlet of Living in 2019.” Fallon and Meyers could both improve their mental health by seeking treatment for their Trump Derangement Syndrome.