FNC's Cavuto to Trump: The Job of the Media Is 'To Call Balls and Strikes on You' 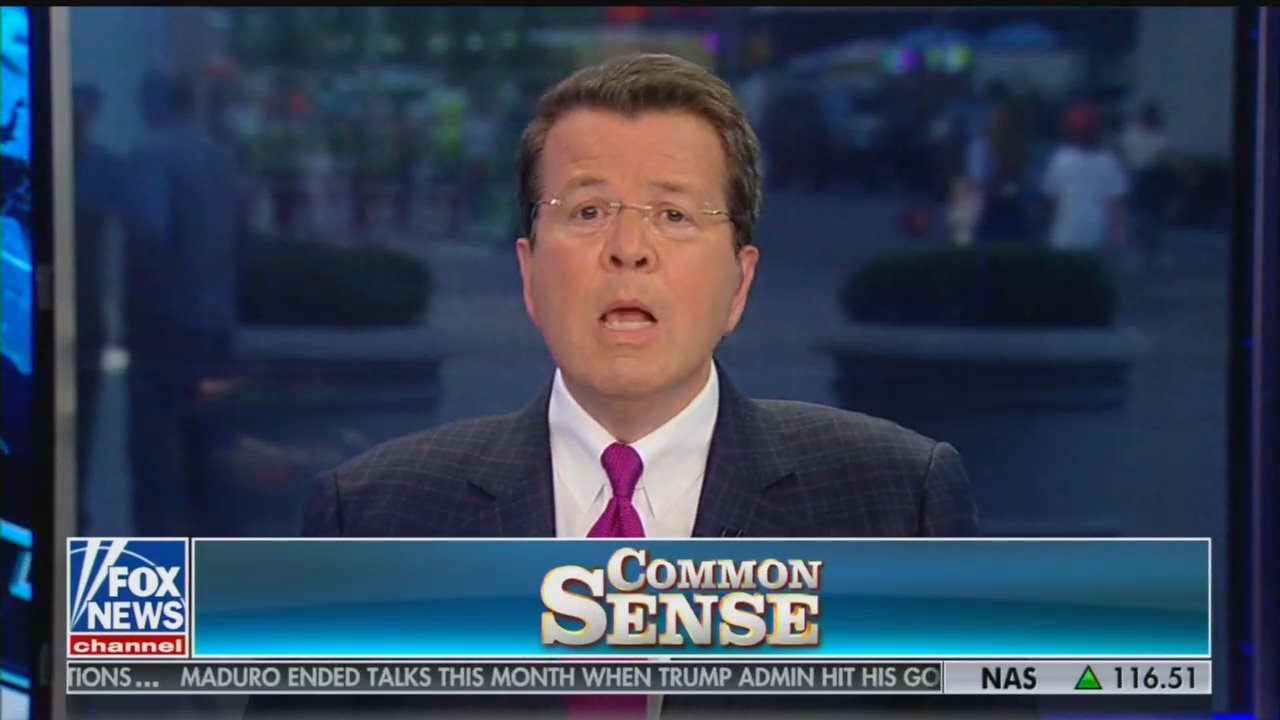 Your World host Neil Cavuto closed his show Thursday afternoon with a monologue addressing President Trump’s recent criticism of Fox News. While he spent his monologue reminding President Trump that Fox News does not work for him, the legacy media could also learn quite a few lessons from Cavuto’s monologue.

President Trump sent out a tweet Wednesday complaining that Fox News was “heavily promoting the Democrats through their DNC Communications Director, spewing out whatever she wanted with zero pushback by anchor, @SandraSmithFox.” In another tweet in that thread, the President suggested that “we have to start looking for a new News Outlet. Fox isn’t working for us anymore!”

The final segment on Thursday’s edition of Your World began with an audio clip of President Trump discussing his displeasure with Fox News during an interview on Fox & Friends co-host Brian Kilmeade’s radio show. Cavuto reacted to President’s Trump complaint that Fox News “isn’t working for us anymore,” reminding him that “we don’t work for you. I don’t work for you.”

Cavuto proceeded to explain the job of the media, which personalities on the other networks should definitely take note of: “My job is to cover you, not fawn over you or rip you, just report on you, to call balls and strikes on you. My job, Mr. President, our job here is to keep the scores, not settle scores.” Many on MSNBC, CNN, and the three networks have made a career out of ripping President Trump and attempting to “settle scores” with him since the day he announced his decision to run for President. They would have a lot more credibility if they decided to “call balls and strikes” rather than act as an arm of #TheResistance.

As his monologue came to a close, Cavuto attempted to find some common ground with the President: “You’re right to say the media isn’t fair to you; that they’re more inclined to report the bad than anything good about you. So, it’s no surprise you’re frustrated that more aren’t in line with you and that everyone at Fox might not be in lockstep with you.” Cavuto told President Trump “you might even think that those who are (in lockstep with you) work for you” before reminding him “they don’t.”

While the legacy media will no doubt enjoy watching a Fox News personality offer constructive criticism to President Trump, they should realize that Cavuto did not let them off the hook either. The media might actually be able to shed their “fake news” label if they remembered that their job was “to call balls and strikes,” not compete for the affections of the anti-Trump left.

A transcript of the relevant portion of Thursday’s edition of Your World is below. Click “expand” to read more.

Your World With Neil Cavuto

BRIAN KILMEADE: I know you were critical of Fox yesterday. You came out and you…

KILMEADE: …tweeted “Fox News heavily promoting the Democrats through the DNC Communications Director spewing out whatever she wanted.”

KILMEADE: So you were very…

NEIL CAVUTO: All right. Well, I think the President watches Fox. I also think he is getting sick of Fox, which is weird because I think he gets pretty fair coverage at Fox but the President making clear to fact-check him is to be all but dead to him and his legion of supporters who let me know in no uncertain terms I am either with him totally or I am a never-Trumper bully. There are no grays, no middle ground. You’re either all in or you’re just out. Loyal on everything or not to be trusted on anything; which could explain the President himself this week bashing Fox News yet again, urging his supporters to stop watching the channel, to quote Tweet “Fox isn’t working for us anymore!” Well, first of all, Mr. President, we don’t work for you. I don’t work for you. My job is to cover you, not fawn over you or rip you, just report on you, to call balls and strikes on you. My job, Mr. President, our job here is to keep the scores, not settle scores. Now, in my case, to report the economic numbers when they’re good and when they’re bad, when the markets are soaring and when they’re tumbling, when trade talks looking they’re coming together and when they look like they’re falling apart. It is called being fair and balanced, Mr. President. Yet, it is fair to say you’re not a fan when that balance includes stuff you don’t like to hear or facts you don’t like to have questioned. You’re only human. I get that. Who likes to be corrected? But you are the President, it comes with the job; just like checking what you say and do comes with my job. After all, I’m not the one who said tariffs are a wonderful thing, you are; just like I’m not the one who said Mexico would pay for the wall, you did; just like I’m not the one who claimed that Russia didn’t meddle in the 2016 election, you did. Now, I’m sorry you don’t like these facts being brought up but they are not fake because I did. What would be fake is if I never did; if I ignored all the times you said you loved your old Secretary of State Rex Tillerson until you didn’t; had no plans to dump your Homeland Security Secretary until you did; called Chinese President Xi Jinping an enemy just last week and a great leader this week. Sometimes, you don’t even wait that long. Last week, you expressed an appetite for background checks before arguing just hours later our background checks are already strong. These aren’t fake items. They’re real items and you really said them, just like you never paid to silence a porn star until it turns out you did, never ordered your former White House Counsel Don McGahn to fire Bob Mueller until we learned you tried. Fake is when it’s wrong, Mr. President, not when it’s unpleasant; just like it isn’t and wasn’t fake when you said the Access Hollywood tape wasn’t real when it was or that you inherited a depression from Barack Obama when you didn’t or that you ripped quantitative easing when he was President but are furious the Federal Reserve isn’t doing the same for you now that you’re President. You’re entitled to your point of view, Mr. President, but you’re not entitled to your own set of facts. Now, we can argue over whether you ever wanted to buy Greenland or disrupt hurricanes with nuclear weapons but where seeds are planted, doubts are sown. You’re right to say the media isn’t fair to you; that they’re more inclined to report the bad than anything good about you. So, it is no surprise you’re frustrated that more aren’t in line with you and that everyone at Fox might not be in lockstep with you. You might even think that those who are work for you. They don’t. I don’t. Hard as it is to fathom, Mr. President, just because you’re the leader of the free world doesn’t entitle you to a free pass; unfortunately, just a free press.