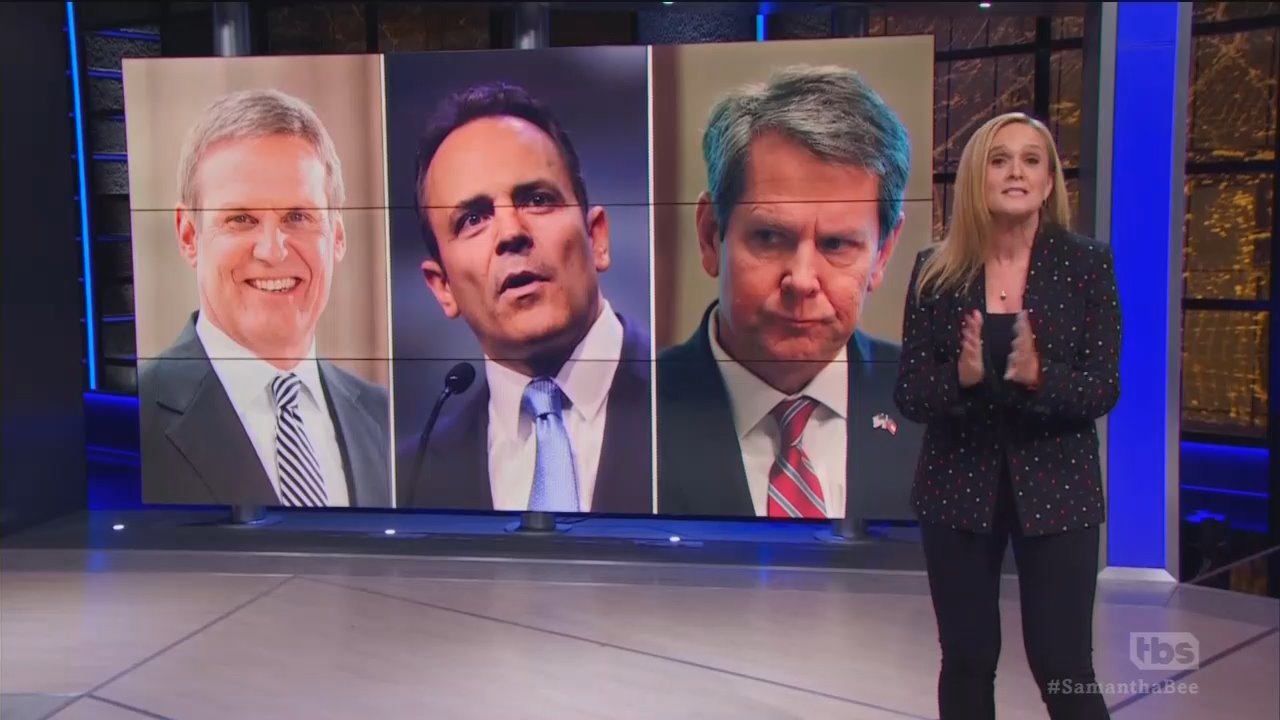 Once again, Full Frontal host Samantha Bee has apparently decided that her true passion is for left-wing politics, not comedy. On the most recent edition of her show on Wednesday night, Bee complained about the “terrible, restrictive abortion laws...being passed across the South” and “the shitty men who pass these laws despite not knowing where a vagina is.” Bee actually traveled to the South to talk to “the women who are doing so much to fight back” against the abortion laws, whom she portrayed as crusaders for “reproductive justice.”

As part of a pre-recorded satirical segment called “Sticky Fingers, Sticky Conversations” -- complete with graphics that looked borrowed from Bravo’s Top Chef -- Bee’s “correspondent” Naomi Ekperigin spoke with pro-abortion activist Loretta Ross at a barbecue joint, who talked about how “reproductive justice picks up when a person misses her period” and has “these oh, my God moments,” where she asks “whether she has healthcare, whether she could keep a job, whether or not she can stay in school, whether or not she’s gonna experience violence.”

According to Ross, “if you have good answers to these questions, you may turn an unplanned pregnancy into a wanted child. But if you have bad answers, then even a planned pregnancy or a wanted pregnancy may end in an abortion.” It looks like “reproductive justice,” a phrase also celebrated by left-wing activist W. Kamau Bell in a recent episode of CNN’s not-funny show United Shades of America, amounts to nothing more than a cheery synonym for abortion.

Ross proclaimed that “people are tired of the pro-choice/pro-life binary so that’s why we’ve spliced together reproductive rights with concepts of social justice to create the phrase ‘reproductive justice.’” Later, Bee gave her take on “reproductive justice,” describing how it “means returning abortion to an integrated part of healthcare.”

At this point, a “menu” appeared on the screen suggesting that abortion is not that much different than other medical services such as “behavioral health services, midwifery services, and pregnancy testing.” This was eerily similar to Michelle Wolf’s declaration that abortion “should be on the dollar menu at McDonald’s.” As the “menu” appeared on the screen, Bee noted “we’re talking a full menu…I love sides.”

For her part, Bee spoke with some pro-abortion activists in Memphis at another barbecue joint, one of whom talked about how “there is a whole system that is designed to enforce their views on how women, mostly women…lead their reproductive life.” Bee asked the pro-abortion activists “do you think that if people were a tenth as excited about progressive activists in the south as they are about barbecue, the world would be just generally a better place?” One of them answered, “I think that this whole reproductive health issue is going to really be measured by what we do here in the South,” after effectively comparing the battle to secure “reproductive justice” to the civil rights movement.

As the abortion propaganda came to a close, Bee indicated that the next edition of “Sticky Fingers, Sticky Conversations” would focus on “ice cream and ICE raids.” While her left-wing audience can surely look forward to an entire skit trashing President Trump as racist, those hoping for comedy will once again find themselves disappointed by Samantha Bee.

SAMANTHA BEE: Terrible restrictive abortion laws are being passed across the south faster than Lil Nas X can release remixes of “Old Town Road,” which, by the way, Lil Nas X, I am available if you need some…oh, you don’t need some? Oh, you don’t need me? I’m lower on the list than Chewbacca mom? Understood. And while we hear a lot about the shitty men who pass these laws despite not knowing where a vagina is, we never hear enough about the women who are doing so much to fight back. So, Naomi Ekperigin and I went to the south to talk to them.

BEE: When I think of the south, I imagine delicious barbecue, losing your virginity to Matthew McConaughey in the back of a pickup truck, and the underappreciated abortion activists who are thriving across the region. Today, on “Sticky Fingers, Sticky Conversations,” we’re gonna dive into two of those things. Naomi Ekperigin and I traveled to two cities to talk with people who are at the front lines of reproductive health. Hope you brought your appetite, because first up, Naomi goes to Daddy D’z BBQ in Atlanta, Georgia...

BEE: …to meet Loretta Ross, one of the women who cooked up a framework we should all probably know but probably don’t.

EKPERIGIN: How would you break down this concept of reproductive justice?

LORETTA ROSS: Well, let me ask you a question. Have you ever had unprotected sex with a man?

EKPERIGIN: Absolutely not. My mama watch this show.

ROSS: Have you ever had your period be late?

EKPERIGIN: This is a very bad BuzzFeed quiz.

ROSS: What would happen next in your life?

ROSS: That’s where reproductive justice picks up. When a person misses her period, she has these “Oh, my God” moments, you know, that are about whether she has healthcare, whether she could keep a job, whether or not she can stay in school, whether or not she’s gonna experience violence. If you have good answers to these questions, you may turn an unplanned pregnancy into a wanted child. But if you have bad answers, then even a planned pregnancy or a wanted pregnancy may end in an abortion.

EKPERIGIN: …even though you the one who said it. Boom.

BEE: Reproductive justice links reproductive rights with the social, political, and economic inequalities that affect a person’s access to reproductive care. But that’s not a good hashtag.

ROSS: People are tired of the pro-choice/pro-life binary, so, that’s why we’ve spliced together reproductive rights with concepts of social justice to create the phrase “reproductive justice.”

EKPERIGIN: So, what do you think about President Trump?

ROSS: Well, Trump is like the gift that keeps on giving. He keeps waking up a portion of white America that had been asleep on reproductive injustice for a long, long time.

EKPERIGIN: Okay, but if he’s a gift, can I give it back?

EKPERIGIN: Can I get a gift receipt? Something.

ROSS: Well, they’ll give you that when they give you your return ticket to Africa.

BEE: This uptick in interest has resulted in increased fundraising from places like Choices, an abortion clinic in Tennessee that is one of the most forward-thinking in the country. To learn more, I went to the world-famous Bar-B-Q Shop, home of Memphis-style barbecue spaghetti…mmm…to talk with the brains behind Choices.

REBECCA TERRELL: Reproductive justice has informed a lot of things for me, that it is not just about abortion. There is a whole system that is designed to enforce their views on how women, mostly women…

BEE: That sounds like you’re making it easier for people to get access to proper reproductive care.

TERRELL: We’ll provide abortion. We’ll provide STI testing and treatment. We see people who are HIV-positive. We see transgender people. We see women who want to have their babies with midwives.

BEE: So, basically, every single thing that gives Republicans heartburn?

BEE: Operationalizing reproductive justice means returning abortion to an integrated part of healthcare. We’re talking a full menu. Mmm. I love sides! And as a bonus, it’s good for business.

TERRELL: What we saw in Texas was, they passed a law designed to make abortion harder to provide. Then, while fighting that law in the courts, clinics just start going out of business, and more clinics close and don’t reopen than close and do.

BEE: Like, if you think about it, an abortion clinic is a business in that it’s an operation that requires a lease and employees have to get paid. So, when litigation causes it to shut down...

TERRELL: People have to find another job. They have to go somewhere else so they can pay their bills, because you’re not bringing any revenue in.

BEE: And that is why you have to diversify your business.

BEE: Just don’t tell the Trump administration that you used the word “diversify.” This is genius. Who knew diversifying revenue streams by providing menopausal management and pap smears could maybe be the answer to trap laws? Do you think that if people were a tenth as excited about progressive activists in the south as they are about barbecue, the world would be just generally a better place?

GRAYSON: Mmm-hmm. The south has definitely been on the cutting edge of the majority of the social and historical civil rights issues that we have seen. I mean, civil rights movement was started here in the south, and I think that this whole reproductive health issue is going to really be measured by what we do here in the south as well.

BEE: You’re giving me a dangerous amount of hope in my heart. What is this that I’m feeling? It feels like joy. Between this and the spaghetti for breakfast...

BEE: I don’t know what’s happening in my tummy. This is the future, and it’s starting in the south. Next week on “Sticky Fingers, Sticky Conversations,” ice cream and ICE raids.