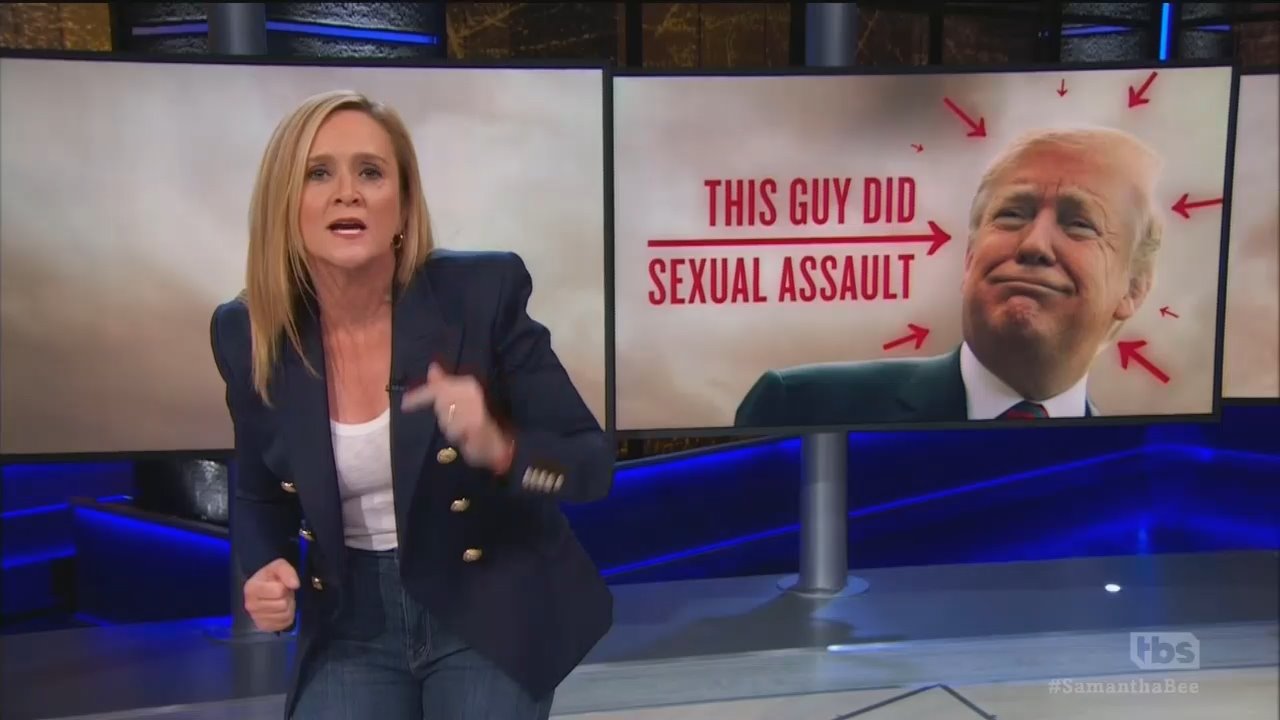 During Wednesday’s Full Frontal, host Samantha Bee launched a typical tirade about the latest allegations against President Trump: “imagine how tired women are of having a sexual assaulter for President.”

That's funny, Bee cried out “it should have been you” when the Clintons didn’t get a return trip to the White House in 2017. Bee knows Bill Clinton meets that definition. She made a fake 90s roast video earlier this year with Clinton-perv jokes.

On Wednesday, Bee accused NBC’s Chuck Todd of “dropping the ball” by letting President Trump “off with softball questions about where he’s going to build his library without once mentioning his many accusers” during his sit-down with President Trump, which aired on Meet the Press Sunday. Bee had harsh words for Todd and others in the media, whom she slammed for getting “tired of talking about how the President did sexual assault a bunch.”

Apparently, Bee didn’t watch the interview, or she would have known that the interview was loaded with tough questions, including asking the President if he was holding migrant children “hostage” and asking him if he was prepared to lose. Nonetheless, Bee continued her rant: “No one should sit down with President Predator without asking about these 22 women.”

After effectively comparing President Trump to a serial cannibal/killer by proclaiming “you wouldn’t interview Jeffrey Dahmer and only ask him about spice blends,” Bee closed by telling Todd: “If you’re not going to hold Trump accountable, you are not a journalist! Go do Sunday morning segments about f***ing lasagna. Otherwise, do your job.” Throughout the latter part of her rant, a graphic with a picture of President Trump accompanied by the phrase “This Guy Did Sexual Assault” behind Bee.

Bee’s remarks on Todd came as part of her opening monologue; which focused almost exclusively on the sexual assault allegation against President Trump by E. Jean Carroll. The late night “comedian” complained about the lack of media coverage the accusation received; specifically trashing The New York Times for burying the story about Carroll’s accusation in the book section: “No one goes to the book section to read breaking news!”

Bee also went after “noted TV dum-dum Meghan McCain” for taking “a much-needed break from being Judaism’s self-appointed spokesperson in order to say that maybe Carroll is lying.” She cracked "Meghan McCain’s take is so bad, Joy Behar literally had to wear sunglasses to hold back her eye lasers. It’s not people who defend accused rapists who put something on the line. It’s the women who decide to speak up."

Not surprisingly, Bee praised MSNBC’s Lawrence O’Donnell; singling him out as “the only cable host to interview her the day the story broke.” In addition to spending more than half of his show Friday night obsessing over Carroll’s “beautiful” rape claims, O’Donnell cited the “Access Hollywood” tape as “one more piece of corroboration” of Carroll’s accusation; telling Carroll “it was exactly what you described him doing to you, exactly, as the first move.”

A transcript of the relevant portion of Wednesday’s edition of Full Frontal With Samantha Bee is below. Click “expand” to read more.

SAMANTHA BEE: With a looming war with Iran to the ongoing humanitarian crisis at the border, it has been a week. Somewhere in the middle of all that was the teensy bit of news that our President, who has admitted to sexual assault on tape, was accused for the 22nd time of sexual misconduct. This time by…I’m sorry, hold on. I just have to say. This is the 22nd accusation of sexual misconduct against Donald Trump. 22. If I had a dollar for every person Trump allegedly sexually harassed or assaulted, I would be doing better than any of his businesses. Janet Jackson’s career ended because her breast sexually harassed one man’s hand. Trump gets 21 do-overs and counting? Okay. Back to our regular programming. This 22nd accusation comes from E. Jean Carroll, the famous writer of Elle’s advice column, “Ask E Jean.”

JUDY WOODRUFF: Longtime advice columnist E. Jean Carroll is accusing President Trump of sexually assaulting her back in the 1990s. In a memoir excerpted in New York Magazine, she says it happened in a department store dressing room. The President denies all of the claims and he said today that he has never met Carroll.

BEE: So naturally, there’s a photo of them together. Remember, if Trump says something isn’t, it definitely is. If he ever says he’s 100 percent not 7,000 racist millipedes in a human suit, grab a can of Raid. Now, if you missed this story, that’s not surprising. It didn’t make the front page of the Saturday New York Times, Wall Street Journal, L.A. Times or Chicago Tribune. But don’t worry, The Wall Street Journal did have the space for the headline, “NASA Worries Its Moon Rocks Might Moonwalk Away,” which I guess I’ll give half credit; since it reminds me of this other alleged predator. Meanwhile, The New York Times coverage was buried in the book section. No one goes to the book section to read breaking news. The only reason I’ve ever opened it is so that I can see if they’ve finally reviewed my latest dinosaur erotica novel, “Pegasaurus.” (INAUDIBLE) called it lyrical. The New York Times biffed their coverage of Carroll’s accusations so badly that Executive Editor Dean Baquet publicly admitted that they had been overly cautious with reporting the accusation and cable news wasn’t much better. In fact, the only cable host to interview her the day the story broke was Lawrence O’Donnell, a man chiefly known for this.

BEE: There’s the guy you want creating a safe space to talk about your rape. The interview did confirm one thing, though. Trump’s M.O. remains the same.

O’DONNELL: I want to offer one more piece of corroboration of what you’re talking about and this is from the other person who was there when it happened. Let’s listen to Donald Trump.

PRESIDENT TRUMP: I’m automatically attracted to beautiful…I just start kissing them. It’s like a magnet. Just kiss. I don’t even wait. And when you’re a star, they let you do it. You can do anything.

BILLY BUSH: Whatever you want.

O’DONNELL: It was exactly what you described him doing to you, exactly, as the first move.

BEE: Finally, days later, the accusations are being discussed but it’s still being treated as a small story. It’s not getting the wall-to-wall coverage that, say, Fire and Fury did, which is ridiculous, because Trump’s response alone should be headline news for days. He denied the accusations by saying “she’s not my type.” Don’t say you have a rape type. You aren’t her type, either, which is the whole f***ing problem. Every woman has heard a guy say some version of “you’re not hot enough for me to rape.” And that is how we know he’s probably a rapist. On the list of dumb lies useless men tell, it’s right between “just the tip” and “I do wash my towels.” And much of the TV coverage left something to be desired, noted TV dum-dum Meghan McCain took a much-needed break from being Judaism’s self-appointed spokesperson in order to say that maybe Carroll is lying.

MEGHAN MCCAIN: I’m going to say something on this show that is probably unpopular. I think it’s one of the most horrific things you could ever think of happening to a woman.

JOY BEHAR: Do you believe her?

MCCAIN: But…I just…I don’t know. It’s like, I was scared to even come out here and say that. I 100 percent came out here…assuming I’m going to be raked over the coals but I would rather be honest with this audience and with all of you than sit here and lie because it’s going to make my life easier in the media.

BEE: Wow, Meghan McCain’s take is so bad, Joy Behar literally had to wear sunglasses to hold back her eye lasers. It’s not people who defend accused rapists who put something on the line. It’s the women who decide to speak up who, as Carroll puts it, receive death threats, are driven from their home, dismissed and dragged through the mud, only to see Trump turn it around, deny, threaten and attack them; which is exactly what he did again. To subject yourself to that is not a book promotion. It’s courage. I’m sorry that the media is tired of talking about how the President did sexual assault a bunch but imagine how tired women are of having a sexual assaulter for President. Of course it’s impossible…

BEE: …to hear accusation after accusation without getting accustomed to it. That’s no one’s fault and I’m not singling anyone out but when you let him off with softball questions about where he’s going to build his library without once mentioning his many accusers, you are dropping the ball, Chuck Todd. No one should ever sit down with President Predator without asking about these 22 women. No one should ever write a puff piece about him without titling it something like “Noted Sexual Assaulter Donald Trump Enjoys Easter Egg Roll.” It matters. It will never stop mattering. You wouldn’t interview Jeffrey Dahmer and only ask him about spice blends. If you’re not going to hold Trump accountable, you are not a journalist. Go do Sunday morning segments about f***ing lasagna. Otherwise, do your job, please. We’ll be right back.