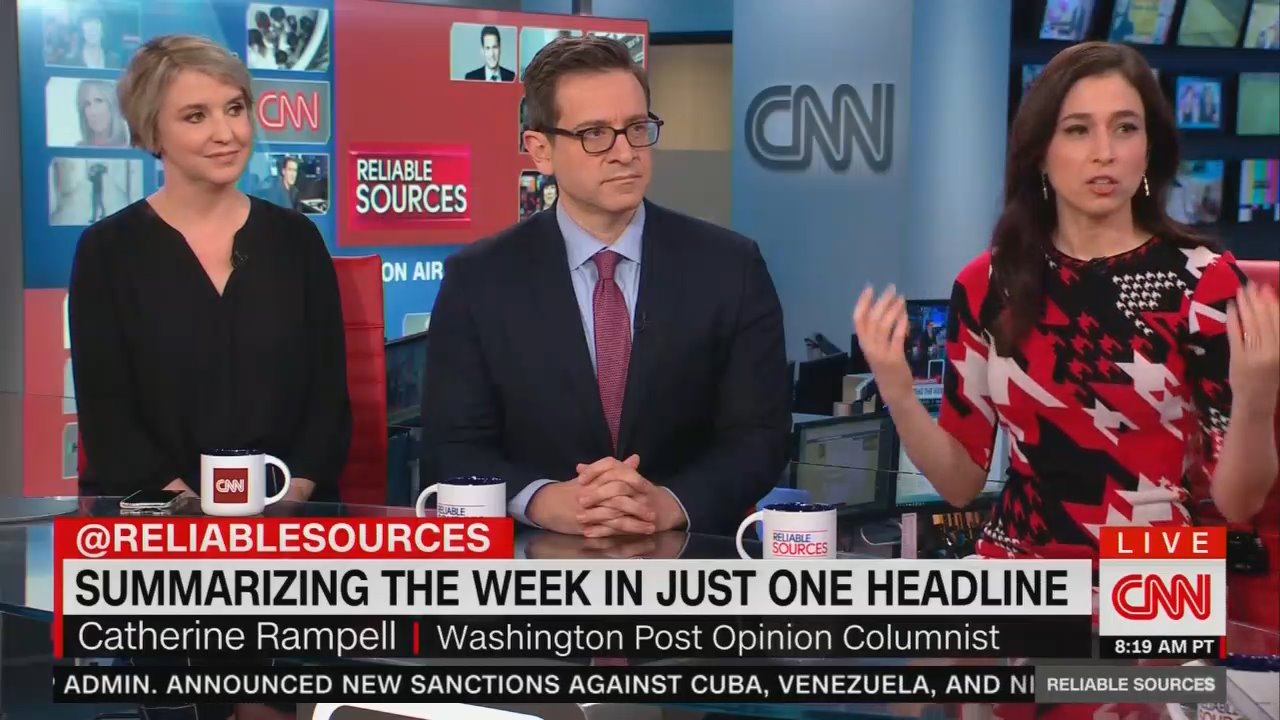 A weekly theme of CNN’s Reliable Sources is that “democracy is dying in darkness” under Trump. So naturally, host Brian Stelter turned to Washington Post columnist and CNN analyst Catherine Rampell to discuss the so-called “Constitutional crisis.” Host Brian Stelter opened the segment by declaring that “democracy in the United States is being tested” and Stelter asked Rampell to sum up the past week in a headline.

Rampell didn’t choose an objective headline. She chose “the frog has been boiled,” referring to “this old adage that if you put a frog in a pot of water and you slowly raise the temperature, the frog won’t jump out...because they don’t get that they’re about to be boiled.”

Trump is killing the American people....slowly. And they’re as dumb as a frog.

Rampell argued that the public has become “inured” to the idea that “Trump is just going to break norms, break laws, violate the Constitution, (and) violate pretty clear statutes.” Rampell complained that rather than see Trump’s behavior as “a threat to democracy” or “a Constitutional crisis,” many voters dismiss it as “Trump being Trump” and “drama playing out.”

Stelter’s three panelists all shared a disgust with Trump and a serious fear that the American people aren’t equipped to process the information they need to share that disgust.

Jess McIntosh, a Hillary Clinton aide turned CNN commentator, lamented that “Trump is banking that you can’t keep up. I think the, the, the headline from this week is that there were too many headlines and he is absolutely putting all of his faith in the fact that the American people do not have the time to follow all of the twists and turns.”

The third member of the panel, Princeton University professor Julian Zelizer, wrote an article for the Post with the headline “Democrats are complicit if they don’t impeach Trump.” After Zelizer declared that “I think we are at the moment of impeachment proceedings,” Stelter reminded him: “we’re not actually there in Washington.” Zelizer proceeded to roll out his headline to sum up the past week: “It’s time for Congress to act. I don’t think we can depend on the public to sort through everything. That is why we have a House of Representatives.”

The segment concluded with a discussion about a training session for Democrats in the House of Representatives called “Winning on Fox News.” McIntosh served as “one of the media trainers” for that event and expanded on her role in the seminar after Stelter asked her “what did you share?”

According to McIntosh, “there is a necessary debate happening in the Democratic Party about whether or not it is appropriate to lend legitimacy to Fox News.” She went on to refer to the network as “the propaganda arm of the Republican Party.” That might qualify as an example of the pot calling the kettle black. They can’t imagine that all this Trump Is Killing Democracy stuff sounds like the “propaganda arm” of the Democratic Party.

As usual, Stelter could not manage to find one right-of-center guest for the panel. The anti-Trump hysteria continued towards the end of the show as Stelter interviewed Carl Bernstein, who doubled down on the hysterical Democratic talking points uttered in this segment.

A transcript of the relevant of Sunday’s edition of Reliable Sources is below. Click “expand” to read more.

BRIAN STELTER: Hey, welcome back to Reliable Sources. I’m Brian Stelter. Democracy in the United States is being tested. Every day brings new headlines about more subpoenas and more legal spats and more stonewalling. Democrats say we are in a Constitutional crisis. And I just keep asking myself how are news consumers, how are citizens supposed to make sense of all this? The panel is back here with me now, Jess McIntosh, Julian Zelizer and Catherine Rampell. Catherine, if I had to have you summarize this week and all of these dramatic developments in a, in a headline, in a one-sentence headline, what would the headline be?

CATHERINE RAMPELL: I would say the frog has been boiled.

STELTER: And we’re at that point now?

RAMPELL: Yes. I…you know, I’m referring obviously to this old adage about that if you, if you put a frog in a pot of water and you slowly raise the temperature, the frog won’t, won’t jump out, right, because they don’t get that they’re about to be boiled. Look, I think that the public has basically become inured to the idea that Trump is just going to break norms, break laws, violate the Constitution, violate pretty clear statutes and that’s just Trump being Trump, you know? It not a threat to democracy, that there is no constitutional crisis, that it’s all outrage, it all kind of blends together and it’s just, it’s just drama playing out on TV.

STELTER: The situation you’re describing is kind of scary, though.

STELTER: Jess, you laughed at the idea of the frog. I think probably laughing in agreement. What would your headline be?

JESS McINTOSH: Trump is banking that you can’t keep up. I think the headline from this week is that there were too many headlines, and he is absolutely putting all of his faith in the fact that the American people do not have the time to follow all of the twists and turns, of machinations of what he is trying to hide, the things that he is stonewalling on, the pieces of information that he’s refusing to give up even after being legally compelled to do so. People are busy. They have jobs and lives and families. They’re not able to follow a 24-hour…I’m hardly able to follow a 24-hour news cycle.

STELTER: But you’re coming to this as a liberal commentator, what do you want the press to do differently?

McINTOSH: What I really want is to put some pressure on the Republican Party at this point. The only reason why we’re in a Constitutional crisis, the framers actually saw the chance that we might have a President who refused to comply by the rule of law. What they didn’t see was that the entire political party who got them there would be engaged in helping them undermine our own democracy. At some point, we have to ask Republicans how much they’re willing to sacrifice in the future principles in order to let this guy run away with everything.

STELTER: Julian, your headline this week, it’s in The Washington Post. It’s in today’s paper. It says “Democrats are complicit if they don’t impeach Trump.” The headline in print is “It’s time for impeachment.”

JULIAN ZELIZER: Sure, I think we are at the moment of impeachment proceedings. My headline would be…

STELTER: But we’re not actually there in Washington.

ZELIZER: Well, that would be the headline, “time for Congress to act.” I don’t think we can depend on the public to sort through everything. That is why we have a House of Representatives. I think the Mueller report changed the dynamics in terms of putting a pretty troubling picture out there for the public. And just as important, this blanket stonewall that we have seen since the release of the report is unprecedented, in terms of using presidential power. So now the Republicans are, they are complicit in, in letting this just go. But House Democrats do have the authority now and they have to make a decision, do we start an impeachment process and that’s now on the table....

STELTER: Let me just turn briefly Jess, to something you did this week on Capitol Hill, kind of interesting. We broke this news on CNN.com earlier about Fox trying to get more Democrats on the air and more importantly, Democrats trying to get on Fox. Democrats in the House of Representatives went to a training session called “Winning on Fox News.” And you were one of the teachers? Is that the right word, Jess?

McINTOSH: One of the media trainers, yes.

McINTOSH: So, I, I think there is a necessary debate happening in the Democratic Party about whether or not it is appropriate to lend legitimacy to Fox News. Myself, I, I stopped appearing on Fox News a few months ago, almost before…

STELTER: Even before you joined CNN?

McINTOSH: Even before I joined CNN, I had made the decision that was not something I wanted to participate in as a Democratic strategist. I simply didn’t want to help the propaganda arm of the Republican Party. [!] But when you’re an elected official, the calculation is different. You have to represent people who might never vote for you, who might never share your views, and one of the only ways to get out of this morass that we’re in right now as a country is by showing folks that there are people who are there to do the right thing, who are there to accomplish something for the people who sent them there. I think that’s where the elected officials were coming from. They genuinely, they were excited about being able to reach this market share. There are tons of Fox viewers and they’re not all reliable Republican voters. Some of them are, are…they want to hear from Democrats in a way that isn’t tainted by the opinion folks over at Fox.