Shocker: 'The View' Calls Out Hillary for Tone-Deaf Comments in CBS Interview

During Monday’s edition of The View, the panel weighed in on Hillary Clinton’s appearance on CBS Sunday Morning, where she said that her husband should not have resigned over the Monica Lewinsky affair, dismissing the idea of the affair as an “abuse of power” and asking “where’s the investigation of the current incumbent, against whom numerous allegations have been made?” Believe it or not, co-host Joy Behar, wearing a shirt with the word “Resist” displayed in capital letters, decided to make a comment that she knew would not impress the ultra-liberal, Hillary-loving studio audience. Her co-hosts soon followed her lead.

After the audience erupted in thunderous applause when the former Secretary of State asked about the lack of investigation into sexual misconduct allegations against President Trump, Behar, an ultra-liberal herself, proclaimed “you know, I have to say, they love...Hillary here but I have to say what she just said is exactly what the Republicans do. They change the subject. So that’s why we never get anywhere in the discourse.”

The right-leaning co-hosts offered even stronger criticisms of Hillary’s remarks, which come across as tone-deaf in the #MeToo era. According to Abby Huntsman, “You can’t put yourself on a pedestal and be a leader for the feminist movement and at the same time refuse to acknowledge the reality that you’ve lived with for all those years and to stand by your husband.” Huntsman had previously suggested that “you know you have a bad argument when your immediate response is, well, they were worse…and you don’t acknowledge it.” Behar agreed, calling Mrs. Clinton’s deflection an example of “what aboutism.”

Meghan McCain went through a rundown of all of the nicknames and mistreatment Hillary had directed at her husband’s accusers, making to sure to throw in that ABC anchor and former Clinton Communications Director George Stephanopoulos’s book outlines the information in greater detail. McCain gave the Democrats some advice, especially as the Democrats attempt to paint themselves as moral purists and champions of the #MeToo movement: “move on from the Clintons.” McCain described Hillary as “the gift that keeps on giving to the Republicans.” 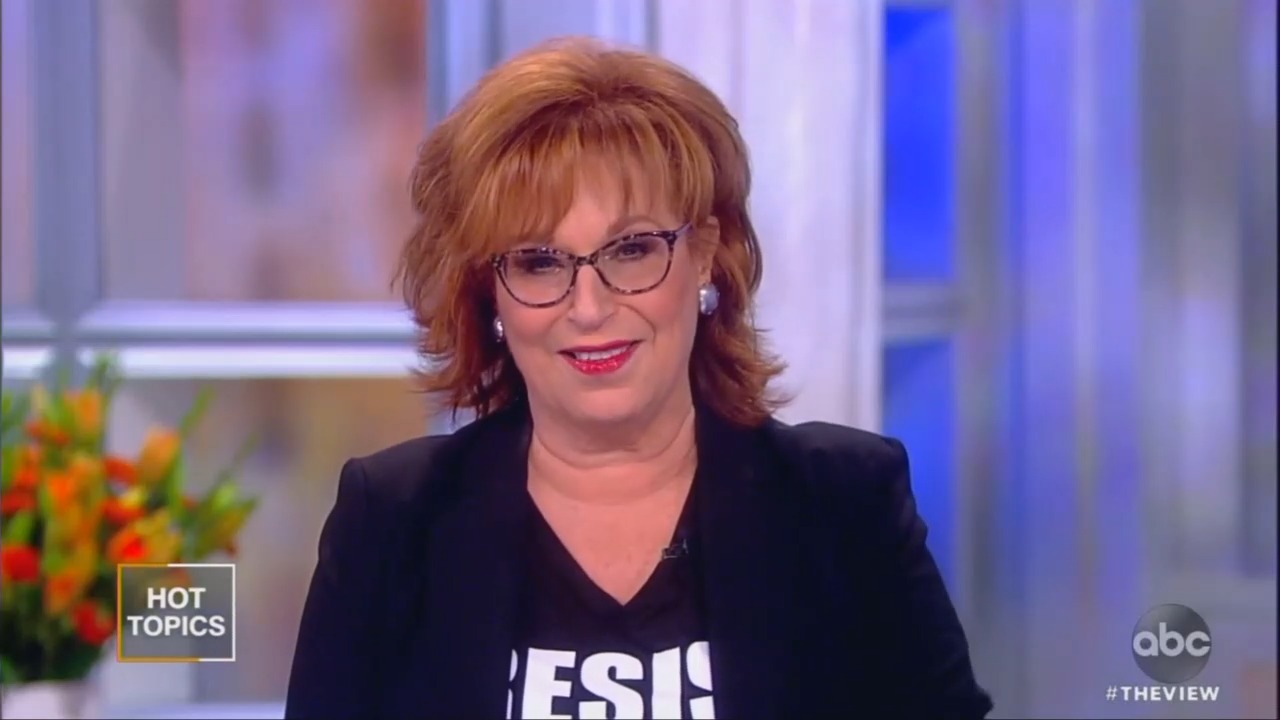 Liberal co-host Sunny Hostin at one point appeared to do what feminists might call “victim blaming” by pointing out that “Monica Lewinsky was an adult. Monica Lewinsky did know the President was married.”

Hostin also asked “What did they expect her to say,” before eventually acknowledging that Hillary could have given a “better response” to the question regarding Monica Lewinsky.

A transcript of the relevant portion of Monday’s edition of The View is below. Click “expand” to read more.

JOY BEHAR: Welcome back to The View. As Hillary and Bill Clinton prepare to take their show on the road, they’re like, they’re like Steve and Eydie, the Osmonds, they’re going on a speaking tour together. Hillary sat down with CBS Sunday Morning and was asked if the #MeToo era has changed her feelings about her husband’s affair with Monica Lewinsky. Watch.

TONY DOKOUPIL: Do you think Bill should have resigned in the wake of the Monica Lewinsky scandal?

DOKOUPIL: It wasn’t an abuse of power?

DOKOUPIL: There are people who look at the incidents of the 90s and they say a President of the United States cannot have a consensual relationship with an intern, the power imbalance is too great.

CLINTON: She was an adult. But let me ask you this, where’s the investigation of the current incumbent against whom numerous allegations have been made?

BEHAR: You know, I have to say, they love, they love Hillary here but I have to say that what she just did is exactly what the Republicans do. They change the subject. So that’s why we never get anywhere in the discourse.

ABBY HUNTSMAN: You know you have a bad argument when your    immediate response is, well, they were worse…

HUNTSMAN: …and you don’t acknowledge it. This highlights to me…

BEHAR: The what aboutism, they call it.

HUNTSMAN: Yeah. This highlights to me I think why people, some people struggled to vote for her was because you can’t have it both ways in her position which is exactly what you want. You can’t put yourself on a pedestal and be a leader for the feminist movement and at the same time refuse to acknowledge the reality that you’ve lived with for all these years and to stand by your husband. I don’t judge other people’s marriages but call it for what it is and call it out for being wrong and for being bad for all those years. I just don’t think she can have it both ways and she continues to try and do this.

BEHAR: Which is the part that bothers you, that she stayed with him?

HUNTSMAN: That doesn’t bother me.

HUNTSMAN: That doesn’t bother me. It bothers me that she tries to be this speaker and embody this, this, this person that is empowering women…

HUNTSMAN: when you…when you, all these years you had women that came out and were telling their story about the way they were treated…

BEHAR: To me she’s just a victim of his stupidity also that she’s not...You know, she didn’t do anything, he did.

HUNTSMAN: That’s what I mean, you can’t…

MCCAIN: There’s a whole list of things that she was also involved in the cover-up of the bimbo eruptions if you read George Stephanopoulos’s book and I just think with Hillary in particular, first of all, she’s the gift that keeps on giving to  Republicans. Democrats have got to move on from the Clintons. She did a leadership forum gala with Kristen Gillibrand and Kamala Harris last May, which is not that long ago. These are two up and coming women in the Democratic Party, possible Presidential nominees…

MCCAIN: But I think if you’re Kristen Gillibrand and you’re the face of, you know, going against, you know, #MeToo…

MCCAIN: I’m sorry, being a proponent of the #MeToo movement and going against sexual harassment, you can’t be connected to the Clintons.

HUNTSMAN: Then how can she criticize President Trump?

HOSTIN: I don’t know that she…do you think that’s off limits?

MCCAIN: Is there an age limit on sexual and power distribution?

HOSTIN: I do think there was a power dynamic…

MCCAIN: So the fact she’s 21 it doesn’t matter?

HOSTIN: Yeah, I think it was inappropriate, that power dynamic. Clearly…

BEHAR: Yeah, it was very inappropriate. But he’s not grabbing her by her genitals. She’s right there with him.

MCCAIN: I don’t condone any of the Trump accusations either and that part is valid. I’m just saying if you’re Hillary Clinton at this moment you should say, you know what, it was a really hard time, we take responsibility, my husband was completely inappropriate, there was a power dynamic, I’d like to move on. America would appreciate that.

HOSTIN: That is a better response.

MCCAIN: I wouldn’t campaign with her if I’m running for President next time, I would let it…

BEHAR: You forget that she won the election by the popular vote.

MCCAIN: I still think in the…but #MeToo didn’t happen until after she was elected.

MCCAIN: It’s a different cultural time right now than it was before.

HOSTIN: But I do think the audience’s reaction was interesting. People clapped for what she said. I think there is a huge number of people that…

HUNTSMAN: I don’t think anyone is sitting at home thinking wondering what do the Clintons think about the #MeToo movement.

BEHAR: No, they know.

HUNTSMAN: I don’t think anyone is actually thinking that…

BEHAR: He’s guilty. He has his…

MCCAIN: By the way, you went after him, go look back, you were hard on him when the scandal happened.

BEHAR: Well, you know, they cons…they call me a hypocrite. A lot of Republicans say I’m a hypocrite because I said I voted for him even though, just because…the same way that people vote for Trump even though. But I never sat on this panel for 22 years and said he was the best thing in that situation. I went after him. I used to have, I used to do something called Monica’s diary where I trashed him mercilessly. I still voted for him, but I did my due diligence with my free speech, we’ll be right back.