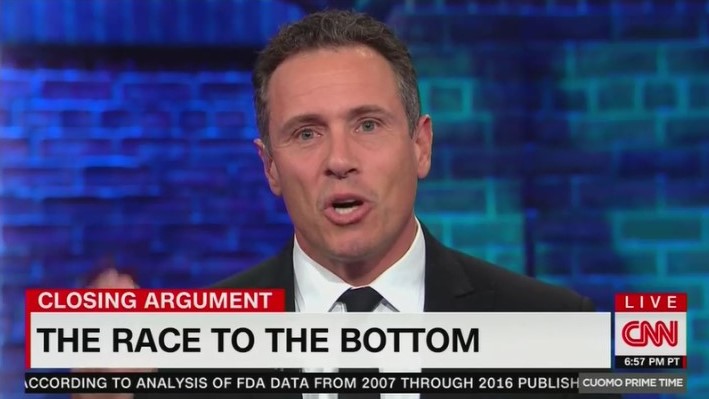 During Friday’s edition of Cuomo Prime Time, host Chris Cuomo went on a rant against President Trump and Fox News hosts during his closing argument. He began by saying that President Trump serves as the source of anger in American politics, playing several clips of the President, as a candidate, making statements such as “knock the crap out of him” and “try not to hurt him. If you do, I’ll defend you in court.”

In fairness, Cuomo admitted that the left does not have “clean hands in this,” specifically referencing Eric Holder’s recently adopted slogan of “when they go low, we kick ‘em.” Cuomo implied that Holder’s statement only gave the political right more ammunition to paint the left as a mob. Cuomo also admitted, perhaps by accident, that Antifa has a “thuggish appendage that creates riots, not resistance.” This more level-headed view of Antifa contrasts with one of Cuomo’s statements earlier this year justifying Antifa’s violence, claiming they had “morality” on their side.

While Cuomo may have made some fair and/or reasonable points at the beginning of his monologue, it quickly went downhill. Cuomo pointed out “the irony” that “Trump, the guy who has done more to cheapen our discourse and lower the bar for acceptable behavior than any major player in the game at the moment, says his mission is actually to save the right from the mob on the left, which is responding to the animus that he engendered.”

He also took some shots at Fox News hosts as he played clips of them warning about the increasing radicalism of the American left, prefacing a clip of Sean Hannity by mentioning his “righteous indignation” and prefacing a clip of Laura Ingraham by talking about her “curled lip of disgust.” He didn’t actually play a clip of Tucker Carlson, saying “he (Tucker) doesn’t have to say anything. He’s just got that pissed puppy dog puss that he has on his face.”

Cuomo went on to accuse the Fox News hosts of “finding common enemies with their base, encouraging the animosity, using the word ‘unhinged’ a lot.” Cuomo made sure to label President Trump’s signature phrase “Make America Great Again” as a “dog whistle to a time of less equality and cultural inclusion” and tried to paint the President as a racist, accusing him of “demonizing blacks who protest” and giving the impression that “illegal immigrants are here to get you.”

He encouraged the audience not to reward the “haters,” presumably referring to President Trump. Cuomo obviously lacks self-awareness, he could just as easily apply the “hater” label to many of the people at his network who have spent the entire week slamming Kanye West as mentally ill and/or directing racial slurs at him.

A transcript of the relevant portion of Friday’s edition of Cuomo Prime Time is below. Click “expand” to read more.

CUOMO: Let’s stipulate for the sake of argument there’s a lot of anger in our politics today. You know why? Because it works. It always has. Dirty secret of politics: negative ads always make the biggest difference in a campaign. But now it’s been notched up, right? Talk of violence is in vogue. Anger towards your opponent. Treat it like an MMA pre-fight, not a debate. Might makes right. The captain of capitalizing on this, of course, is our President.

PRESIDENT TRUMP: You know what they used to do to guys like that when they were in a place like this? They’d be carried out on a stretcher, folks. Knock the crap out of him, would you? Seriously. I’d like to punch him in the face, I’ll tell you. Get him out. Try not to hurt him. If you do, I’ll defend you in court. Don’t worry about it. I would have been out there fighting, folks. I don’t know if I would have done well, but I would have been boom, boom, boom, beat the…

CUOMO: Look, is he all show, no go? Of course. But he’s also President of the United States, and we used to expect that position to appeal to our better instincts, but now appealing to base instincts seems to work better. Trump is wildly popular among the right. Success sells and silences. Conservatives who have long made morality and character their marker are now marked by quiet. You hear that? That’s the GOP leaders keeping their mouths shut and listening along to Trumpian invective that they used to abhor. The left, they’re not clean hands in this. They think they’re getting wise by deciding to become more like what they used to call out.

CUOMO: Now, Eric Holder tweeted he wasn’t calling for violence, and I believe him. He was just saying, we have to get tough. But it raised eyebrows. Why? Because it adds to this sense that the left is becoming what they used to say they don’t respect. These surprise wins in primaries, they’re not that surprising. The left wants more extreme rhetoric and overt toughness to match the opposition. We see it in resistance movements as well. Antifa, they have this thuggish appendage that creates riots, not resistance.
Protests are getting angrier. Confrontations are more common. And even when effective as we just saw during the Kavanaugh hearing, that mode invites more, and down, and down we descend. Nobody wins a race to the bottom. The irony is that Trump, the guy who has done more to cheapen our discourse and lower the bar for acceptable behavior than any major player in the game at the moment, says his mission is actually to save the right from the mob on the left, which is responding to the animus that he engendered.

CUOMO: Ironic that he is calling out people for going too far. Now, it’s in the media too. Media can be a feedback mechanism for what’s out there. With Trump, it doesn’t create the energy. It harnesses it, turbo charges it. That’s Fox. Sean Hannity, righteous indignation.

SEAN HANNITY: The language of the left, the people that want to be in power in 26 days reaching new lows on an hourly basis.

LAURA INGRAHAM: The chaos strain has now even infected what was once the Democratic establishment.

CUOMO: And Tucker, he doesn’t have anything…he doesn’t have to say anything. He’s just got that pissed puppy dog puss that he has on his face. There it is. What are they doing? They’re finding common enemies with their base, encouraging the animosity, using the word “unhinged” a lot. Trump’s positions are further proof. Make America Great Again is an angry shake of the fist. It’s a dog whistle to a time of less equality and cultural inclusion. When was America better than it would be one minute from right now? When has it been more free, more equal? Come on. Demonizing blacks who protest. Illegal immigrants are here to get you. Hide the women and jobs. Islam is the enemy, except the Saudis. Those rich guys, they’re great and rich. Did I mention they buy lots of stuff from me? Now, some who don’t like their game, they’re going to…they don’t like when their game is exposed, so what will they do? They’ll twist what I’m going to say right now, but it doesn’t matter because you can’t hide from the reality. Look at what is passing for campaign rhetoric by a Republican in a Governor’s race in a major state.

CUOMO: This is not who we are, not at our best. That guy belongs in a bar, being told you’ve had enough, not getting your vote. Now, it’s not just about how we want to be. It’s how we have to be, okay? This is a very unique place. We’re only held together by our respect for the collective. It’s what’s in our Constitution. It’s our cultural creed. It’s a command here. We, the people, one out of many. My pop taught me you find your own good in the good of the whole here. Remember who we are. Don’t reward the haters. Demand they do better for you. Thank you for watching me. I hope you have a beautiful weekend.