Kimmel: In Return for Kavanaugh's Confirmation, We Should 'Cut That Pesky Penis of His Off'

During Monday’s edition of Jimmy Kimmel Live, the eponymous host weighed in on the 11th hour sexual assault allegations against Supreme Court nominee Brett Kavanaugh.  The conversation turned quite graphic at one point, with Kimmel suggesting that Kavanaugh should sacrifice his penis in exchange for his Supreme Court seat.

Throughout his opening monologue, Kimmel threw a series of one-liners at Kavanaugh and President Trump.  He began by focusing on President Trump’s speech at the United Nation’s General Assembly, referring to his “America First” strategy as “hulk smash.”

The conversation quickly turned to the “drama surrounding his pick for the Supreme Court.” Kimmel remarked that Kavanaugh now has two sexual assault allegations, saying that “only 12 more, he can run for President,” a reference to the allegations against President Trump.

Kimmel told his audience, “I think there’s a compromise here and hear me out on this. So Kavanaugh gets confirmed to the Supreme Court...Well, in return, we get to cut that pesky penis of his off in front of everyone.” Kimmel then tried to make it look like he was taking a poll of his audience to determine whether or not his idea of vigilante justice was a good idea or not, asking “No? That’s not good? No? I thought I had a solution there for a minute.”

Kimmel and his audience mocked Kavanaugh for telling Fox News’s Martha MacCallum that he remained a virgin throughout high school and college, they switched the chyron at the bottom of the screen to read “Kavanaugh: Nobody Wanted Sex With This Dweeb.” Kimmel suggested that if Kavanaugh fails to make it to the Supreme Court, he could try out for The Bachelor.

A transcript of the relevant portion of Monday’s edition of Jimmy Kimmel Live is below. Click “expand” to read more. 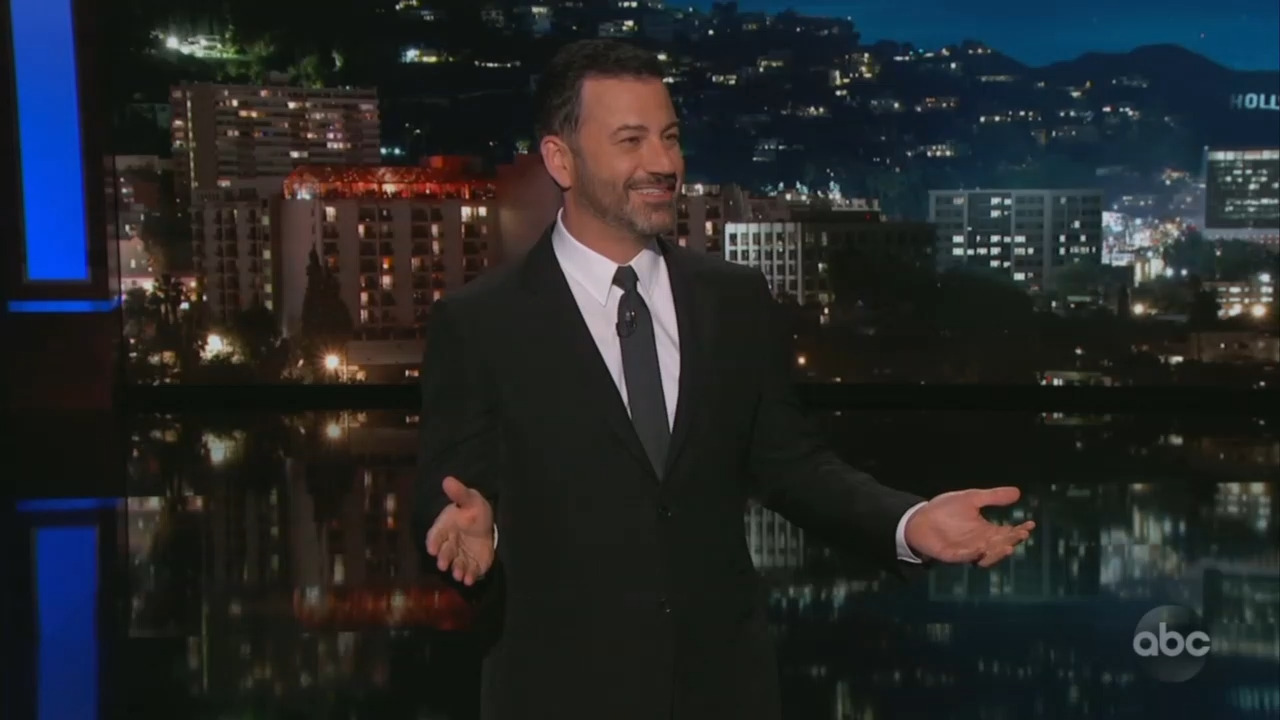 JIMMY KIMMEL: President Trump is in New York right now. He’s scheduled to address the U.N. General Assembly tomorrow. His focus during these meetings will be “America First.” That’s like his version of hulk smash, “America First.” And while Trump is busy making friends at the U.N., there’s a much more drama surrounding his pick for the Supreme Court. Another woman came forward to accuse Brett Kavanaugh of sexual misconduct. That makes two women. Only 12 more, he can run for President. According to a story that was in The New Yorker yesterday, when Kavanaugh was at Yale, a female classmate claims they got very drunk at a party and he put his penis in her face. The Republican leadership reportedly knew this second round of accusations was coming and tried to push up the confirmation so it would happen before the story came out. Kavanaugh himself doubled down on denials. He did an interview on Fox News tonight in which he revealed a lot.

BRETT KAVANAUGH: I’ve never sexually assaulted anyone. I did not have sexual intercourse or anything close to sexual intercourse in high school or for many years thereafter, and the girls from the schools I went to and I were friends.

MARTHA MACCALLUM: So you’re saying that through all these years that are in question you were a virgin?

MACCALLUM: Never had sexual intercourse with anyone in high school?

MACCALLUM: And through what years in college, since we’re probing into your personal life?

KAVANAUGH: Many years, many years after. I’ll leave it at that.

KIMMEL: Wow. Thank you for admitting that. He was a virgin until many years after so if he doesn’t get to be on the Supreme Court, maybe he’ll be The Bachelor. They’ve got a thing there. On Thursday, Judge Kavanaugh and his first accuser Professor Christine Blasey Ford will, both of them will testify before the senate Judiciary Committee. Professor Ford claims Kavanaugh tried to sexually assault her at a high school party. He claims that he kept calendars detailing his social engagements from 1982 that will help to exonerate him. Okay, what 17-year-old keeps calendars of his social engagements? No wonder he was a virgin.

KIMMEL: In light of this new allegation, President Trump expressed no change in his view about Kavanaugh. In fact, if anything he likes him more.

PRESIDENT TRUMP: Judge Kavanaugh is an outstanding person, and I am with him all the way.  We’ll see how it goes with the Senate. We’ll see how it goes for the vote. I think it could be, there’s a chance that this could be one of the single most unfair, unjust things to happen to a candidate for anything but I am with Judge Kavanaugh, and I look forward to a vote, and for people to come out of the woodwork from 36 years ago and 30 years ago and never mentioned it, all of a sudden it happens, in my opinion it’s totally political.

KIMMEL: Yeah, spoken like a man who has people coming out of the woodwork from 30 years ago. With that said, I think there’s a compromise here and hear me out on this. So Kavanaugh gets confirmed to the Supreme Court. Okay. Well, in return we get to cut that pesky penis of his off in front of everyone. No? That’s not good. No? I thought I had a solution there for a minute.