During Wednesday’s edition of The Five, co-host Greg Gutfeld delivered a monologue highlighting the hypocrisy of the media for slamming President Trump when he goes after media outlets but looking the other way when New York City Mayor Bill de Blasio criticized Fox News during a recent interview with The Guardian.

During his interview with The Guardian, which Gutfeld described as a “crazy-left British newspaper,” de Blasio hypothesized: “If you could remove News Corp from the past 25 years of American history...we would be a more unified country.” Gutfeld sarcastically pointed out that the other networks have said next to nothing about de Blasio’s attack on News Corporation, the parent company of Fox News. He joked, “We went to the mainstream media for comment on this blatant attack on the press,” only to show a picture of CNN media critic Brian Stelter’s head on a cricket as sound effects of critics chirping played.

As The Daily Wire pointed out, Stelter repeatedly defended de Blasio’s remarks about Fox News. Gutfeld brought this up when pointing out that “Stelter denies the words are an attack on the press, claiming it’s not about the media at all but a media empire. Right. I guess if Trump didn’t say it, it’s not a story. And if it’s about Fox, who cares?”

After concluding his monologue, Gutfeld allowed the rest of the panel to weigh in on de Blasio’s comments.  He asked guest co-host Candace Owens if the media’s silence on the matter amounted to a double standard.  Owens responded: “Is that a serious question? Double standard on the left? I mean, is water wet? This is what we are seeing all the time. This is their entire thing. You can, we can do it, but you guys can’t. The left loves this, you know?"

Co-host Jesse Watters described his rocky relationship with de Blasio, bringing up how he “physically had me removed from his press conference by security because I asked him a question” and “tweeted at me and says Jesse Watters doesn’t belong in New York City.”

Watters attempted to explain the real reason why de Blasio does not like Fox News: “He doesn’t want unity in this country. He wants a monopoly. They (liberals) can’t be content with 90 percent control over the media. They need 100 percent control. They can’t stand criticism and they want praise.”

A transcript of the relevant portion of The Five is below. Click “expand” to read more. 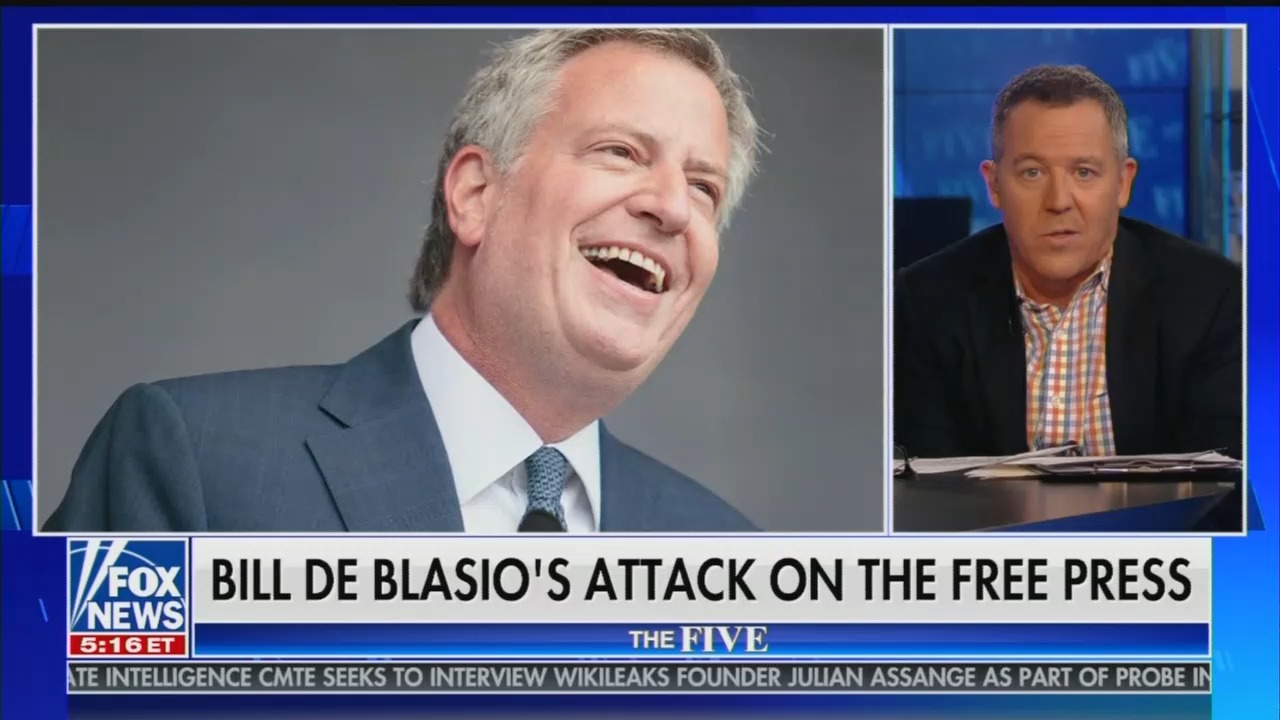 GUTFELD: New York City Mayor Bill de Blasio spoke to The Guardian on Tuesday. The Guardian is a crazy left British newspaper so it was basically no different than de Blasio talking to himself. Crazy stuff comes out of his mouth and people with butterfly nets make a circle because the Looney bin might be the only place left for de Blasio and his make-believe politics. That was a lie. He told The Guardian “If you could remove News Corp from the last 25 years of American history…we would be a more unified country…We would not be suffering a lot of the negativity and divisiveness we’re going through right now.” We went to the mainstream media for comment on this blatant attack on the press.

GUTFELD: Stelter’s head on a cricket. Only on The Five, ladies and gentlemen. Bill de Blasio, when was the last time you gave this towering piece of politics a thought? So he thinks America would be better off without us? What he’s really saying is he would be better off without us. But he’s wrong. Even without America’s most-watched news channel making fun of him, other progressives still shun him. He’s seven feet of political invisibility. So it should be easy to pretend de Blasio’s dumb ideas don’t exist but if that were the case, millions of people would be better off. You can’t beat leftism for burdening humanity, and that’s why Lurch hates us. We point this out while doing our best to ignore him. Anyway, over at CNN, Brian Stelter denies the mayor’s words are an attack on the press, claiming it’s not about the media at all but a media empire. Right. I guess if Trump didn’t say it, it’s not a story. And if it’s about Fox, who cares? We get it. Run along, Brian. Anderson’s lunch is getting cold. Okay, Dana, de Blasio is the mayor, he’s not the President. But I mean…

DANA PERINO: But he wants to be the President.

PERINO: That’s what I think this is all about. He is a term limited lame duck. This was right around the time when in Iowa, Democratic hopefuls start going out there just trying to like basically send out a signal. And attacking leading publications is a way to do that. Where did he learn that?

PERINO: Right? Like, President Trump has been very effective with it. I don’t know if it will work for de Blasio. I assume not. But I do think that he’s wading back into some of these bigger fights. Like he wants to pick a fight with Uber here in New York City…

PERINO: …and that’s partly because he needs some reason, some way to get national coverage.

GUTFELD: Yeah. Candace, double standard? The fact that, you know, he’s, they’re talking about Fox, not a big deal. Because, you know, everybody knows what Fox is. It’s not like CNN.

CANDACE OWENS: Is that a serious question? Double standard on the left? I mean, is water wet? This is what we are seeing all the time. This is their entire thing. You can, we can do it, but you guys can’t. The left loves this, you know? They’ve been unusually silent at CNN this week. They were silent when we were attacked although they spent all of last week crying about Jim Acosta and the “CNN sucks” chant, which, by the way, it kind of does. Okay? This is what they do. It’s sickening but at the same time, it’s like par for the course. This is the number one network for a reason. Nobody cares what de Blasio thinks.

GUTFELD: Geraldo, I was going to ask you a question but I can tell you are about to talk.

GERALDO RIVERA: Why, just because my cheeks are all puffing out?

RIVERA: My fists are clenched.

GUTFELD: You know de Blasio. You know everybody in New York.

RIVERA: You know, I, he’s, what has always impressed me about de Blasio is that for all his dominance of local politics, New York mayoral politics and local politics, he has zero national appeal, zero charisma. I mean, when you compare him to Bloomberg or to Giuliani or even to Ed Koch before that. You know, here’s a guy, he’s a giant guy, he dominates physically and yet he has zero kind of appeal. He doesn’t move the needle at all. I don’t think he has any future in the Democratic Party. He’s never talked about it, I don’t think any…And he really has it out for Fox News. I mean, we have press parking. I’ve always had press parking; 47, 48 years in the business. I’ve always had NYP plates because I always park right in front of my, my shop. I worked at ABC 15 years, NBC eight years, the talk show at CBS 11 years and always had an NYP. He took NYP parking away from Fox News, they still have it at NBC two blocks up. They still have it at CBS four blocks up but he took away NYP parking so I am really against de Blasio!

GUTFELD: This is an outrage! I think America should feel his pain!

RIVERA: That’s right, I have a bad leg.

OWENS: That is ridiculous.

GUTFELD: Jesse, have you lost any preferred parking since de Blasio’s become mayor?

JESSE WATTERS: I need to know how to get those NYP plates. I need some of those. I remember de Blasio physically had me removed from his press conference by security because I asked him a question.

PERINO: Did they pick you up?

WATTERS: No, they couldn’t. I’m pretty strong. So they had, he’s very prickly, he’s very sensitive. He doesn’t want unity in this country. He wants a monopoly. They can’t be content with 90 percent control over the media. They need 100 percent control. They can’t stand criticism and they want praise. He tweeted at me and says Jesse Watters doesn’t belong in New York City.

OWENS: What does that even mean?

OWENS: What does that even mean?

WATTERS: One time he was getting warm in a tent during New Year’s Eve and I wanted to go down there and get warm too and I was told by his security no, you’re not allowed to be in the same tent as the mayor. He doesn’t want you in there.

OWENS: That is the most absurd think that I’ve ever heard.

GUTFELD: And he tweeted at you?

GUTFELD: That is…I am now beginning to like this mayor.

OWENS: That is kind of funny, you can’t stand in my tent.

GUTFELD: Get out of my tent.

OWENS: Get out of my tent, Jesse.

GUTFELD: Well, that’s intolerant. If you can’t allow, you know, Jesse to get warm. What kind of world is this?

PERINO: How could we let this segment go by without talking about the obvious degradation of the city?

PERINO: I have lived here, what, seven years, almost eight years. And in the last few, you can really see a decline. Every day, you see it more.

RIVERA: It’s because of Uber.

GUTFELD: But no, the thing is, Geraldo, it’s because…

RIVERA: Construction on every block.

GUTFELD: No Geraldo, it’s because nobody votes in New York because they assume the liberal is going to win. So he, 30, 20 percent of the people vote.

PERINO: Uber didn’t cause the homeless problem though.

OWENS: The homeless problem, I was shocked by that the other morning when I was walking. There are so many homeless people and it wreaks. And New York City was cleaner years ago.

PERINO: People deserve to be treated better than that.