White House Press Secretary Sarah Huckabee Sanders made an appearance on New Day this morning, where co-host Chris Cuomo repeatedly tried to paint the President and his immigration policy as racist.

Cuomo’s first beef came with a statement President Trump made during his State of the Union, when he said “All Americans are Dreamers.” Cuomo complained that this statement was “not true.” The President, who has made the idea of putting America first a central part of his administration, simply made the point that the media and the left have a tendency to focus on the achievements and plight of the “Dreamers” while ignoring the achievements and plight of American citizens.

The back and forth between Cuomo and Huckabee Sanders went on for several minutes. Cuomo said that the immigration proposal put forward by the White House, which would eventually legalize 1.8 million illegal immigrants brought to the country as children in exchange for a border wall and an end to chain migration, featured too much “exclusion.” Perhaps he did not notice that the deal President Trump put forward includes providing a path to citizenship for about a million people not originally protected by President Obama’s DACA Executive Order.

Cuomo tried to claim that President Trump’s preference for a merit-based immigration policy makes him a racist. To help make the case for that argument, he brought up the “s-hole” comment that Trump allegedly made at a closed-door bipartisan meeting on immigration at the White House. Cuomo seemed to channel his inner Nancy Pelosi, who claimed that the President wants to "make America white again," by saying, “He wants people to come into the country but not from those certain s-hole countries. He wants them rich and white because he wants them."

As the discussion on immigration came to a close, Sanders told Cuomo that he was “trying to create a narrative that doesn’t exist”, referring to Cuomo’s multiple attempts at portraying the President as a racist. Cuomo concluded the segment on immigration by bringing up the “other things he said about immigrants that are so ugly and destructive.” Apparently, pointing out the harsh and unfortunate reality that open borders have had quite a negative impact on our country, especially by allowing members of the violent gang MS-13 to pour into our country, was "ugly and destructive."

As the debate about immigration continues on Capitol Hill, expect the media to continue to regurgitate the Democrats’ talking points when it comes to immigration.

Check out the full transcript of the January 31 exchange between Cuomo and the White House Press Secretary on the hot button issue of immigration:

CHRIS CUOMO: Message versus messenger. Clinton – you know you have problems, you know you have to make the process better in terms of who gets into this country and also whom you decide to throw out. But the motivating ethos from Clinton, the idea was, we are our diversity. The feeling is with this President, he sees diversity as a minus. Not one story last night, and by the way, the President did a good job articulating people’s stories last night, and it’s very powerful for the audience and for the media but not one about a successful dreamer. Not one. Although he did say all Americans are dreamers, which again is not only not true but I didn’t understand the point of doing that.

SARAH HUCKABEE SANDERS: Look, the President has committed to solving this problem. He has said he wants to find a solution and he’s laid one out. Democrats don’t have a message. They are simply sitting on their hands and being angry instead of coming to the table to have real negotiations.

CUOMO: Because they believe it is a policy of exclusion. Because he has these four pillars...

SANDERS: How is it a policy of exclusion, Chris, when the President frankly went further than Barack Obama ever did as President? He, he has tripled the number of people that he has included in this program.

SANDERS: That is the opposite of exclusion. That is broadening the spectrum and taking it a much step further. The idea that Democrats are saying that this President is not being inclusive and is not trying to put an actual solution on the table is frankly laughable and they should be embarrassed that they are trying to peddle that kind of, just false premise because it’s just frankly not true.

CUOMO: Well, the premise is this. With one hand he gives, pathway to citizenship. Going to be hard to sell in part of your party by the way. With the other hand, he’s taking away. And that there are obviously at least two of these pillars, if not three, that are designed to limit who comes into this country and what types of people come into this country, which is what the Democrats are trying to protect against. So the practical problem becomes, you have two of them. The first one is this, you have two pillars too many? Do you think you can get any deal that goes beyond dealing with DACA and security? It seems like the Democrats will give you security, vernacular about the wall will be an issue, but the other two may be a bridge too far.

SARAH HUCKABEE SANDERS: But you can’t just do partial security. It has to be the whole thing. Otherwise, we’re dealing with this same situation in two, three, four, five years. The President doesn’t want to kick the can down the road anymore. He wants to be able to sit down with Democrats, sit down with Republicans and say, look, we have a problem with the DACA system. Let’s fix it. We have 1.8 million people. Let’s give them a pathway but at the same time, let’s make sure we don’t find ourselves back here again. That’s why you can’t just have one or two pillars. You have to have all four, the same reason a stool doesn’t work with two legs. You got to have all of that. 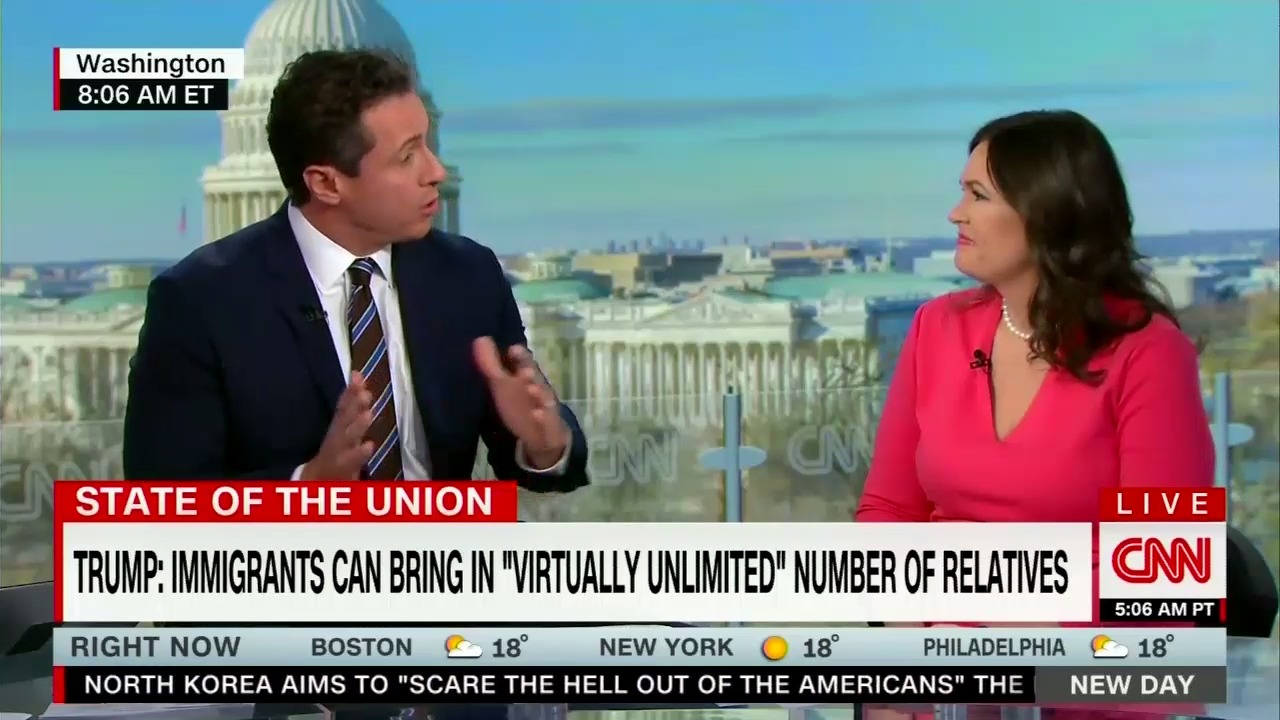 CUOMO: It’s too much exclusion.

SANDERS: It’s not exclusion, though. It’s the safety and security of the American people.

CUOMO: I know but where’s that seen in the facts though, Sarah? You know, when it comes to the lottery, the selling point is we don’t know who these people are when they come on. You know that’s not true. They get vetted, they get vetted several times. What you call chain migration, which the Democrats call family unification.

SANDERS: Which Democrats have voted, have voted to end in the past.

CUOMO: No, no, no. What they’ve done is to vote for limitations. And nobody is saying that you don’t want to improve these processes so you know who’s coming in but the idea, what the President said last night, somebody can literally bring in as many people as they want, it’s just not true. It’s not true in the facts, it’s not true in the reality.

SANDERS: People are, multiple instances where they are bringing in dozens of people. Look, we’re not saying they can’t bring in anybody. We’re just limiting the number to be the, the nuclear and immediate family.

SANDERS: That’s not true at all. That’s actually what Democrats are doing, is trying to paint the President as saying this. Look, the President wants to have people, I’ve heard him say it hundreds of times, he wants people from all over the world, from all different places to come. But he wants to make sure that they want to come here for the right reasons, that they want to come here to be part of our society, to contribute, to work, to help raise a family, and to make sure that they’re not coming here to do harm to American citizens. I think that’s a positive. I think everybody in America thinks that’s a positive. And I think that’s a reason that 75 percent of the country last night said they liked Donald Trump’s speech. There was a poll last night --

CUOMO: There was plenty of stuff in there to like. We had 48 percent were highly favorable. Look, it’s one thing to say it. It’s then what do you do and what do you tweet thereafter. You know, we don’t have to go back into the language he used. He wants people to come into the country but not from those certain S hole countries. He wants them rich and white because he wants them from Norway and that’s not America.

CUOMO: We, I wouldn’t be here, if that's America.

SANDERS: That’s the opposite of what this President has laid out. By very definition, a merit-based system is colorblind. It is absolutely outrageous to claim that it is anything different.

CUOMO: But he said exactly that, Sarah.

SANDERS: The Democrats have been begging for some of these things in the past and now they claim that they’re racist. That is just untrue.

CUOMO: But he said it, Sarah.

SANDERS: He said that he wanted a merit-based system, absolutely.

CUOMO: No he didn’t. He said that he didn’t want people from those countries.

SANDERS: I guess I missed you being in the room to hear the context...

CUOMO: Are you saying that he didn’t say that?

SANDERS: I’m saying that you’re trying to create a narrative that doesn’t exist. You’re trying to take words of the President and make them mean something that they don’t. This is a President--

CUOMO: Based on the context of all the other things he said about immigrants that are so ugly and so destructive.