The scandal surrounding New York Governor Andrew Cuomo’s mishandling of nursing home patients during the early weeks of the coronavirus pandemic was never a secret. Yet in their zeal last year to promote Cuomo as a counter to President Trump, broadcast news, cable news, daytime talk shows and late night comics all preferred to tout Cuomo as a pandemic hero, instead of telling the truth about his actions. Watch:

Even though New Yorkers learned about the scandal in April 2020, the Cuomo-boosters in the national media refused to touch it. The broadcast evening newscasts made the Governor a star of their pandemic coverage, yet devoted a scant 51 seconds to it in all of 2020. This year, as the depths of Cuomo’s duplicity have become apparent, those same newscasts have delivered a scant 10 minutes, 56 seconds during the past four weeks (January 28 to February 25) — nearly as much airtime as they devoted over just four days (February 18-21) to Texas Republican Senator Ted Cruz’s ill-advised trip to Cancun (eight minutes, 51 seconds). 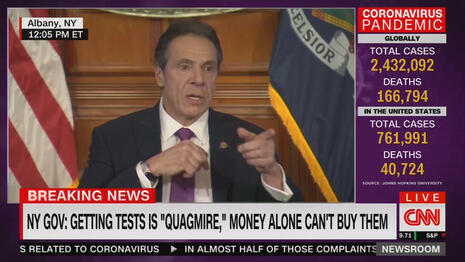 ■ Burying the Bad News in 2020: It was March 25, 2020, when New York ordered nursing homes to re-admit COVID patients even if they were still infectious. As the death toll among nursing home patients rose sharply, the New York Post became the first of the big New York City dailies to write about the directive on April 21, after it came up at the Governor’s daily briefing the previous day. (Cuomo, saying “I don’t know,” punted the question to his Health Commissioner, Howard Zucker.)

The New York Times followed suit three days later, on April 24, quoting Mina Ebrahem, a physical therapist who had worked at several New York City nursing homes: “Whoever made this decision, whoever did this, I consider this a sentence of death for all the older patients, whoever is in a nursing home.”

But while the national liberal media worked overtime to make Cuomo the face of supposedly competent coronavirus leadership, they ignored the horrible consequences of his order.

A Nexis search found ABC’s World News Tonight, the CBS Evening News and NBC Nightly News discussed Cuomo in at least 401 evening news stories between March 1 and December 31, 2020, including weekends. Yet only two of those stories, both on Nightly News, made any reference to Cuomo’s nursing home order. Total airtime: a mere 51 seconds. 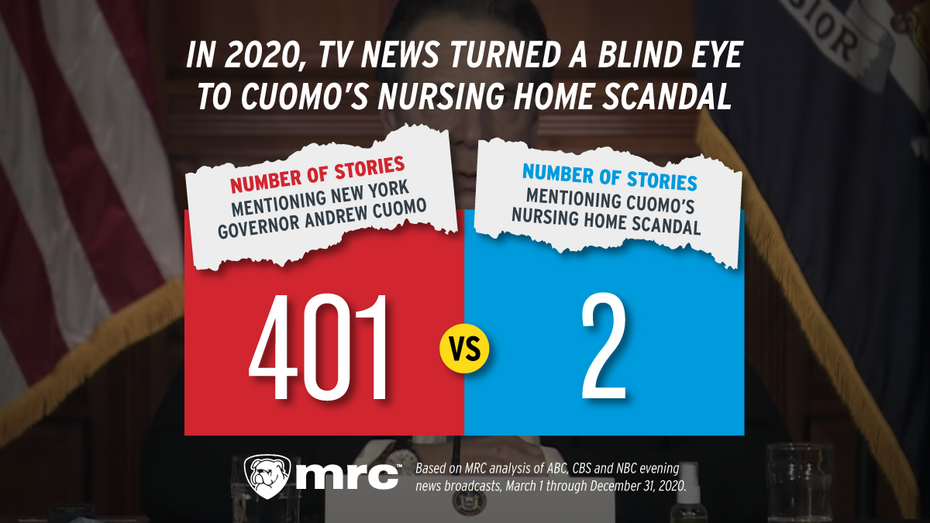 ABC’s World News Tonight and the CBS Evening News were completely silent on the matter throughout 2020. Indeed, weeks after the story broke, on the May 5 Evening News, CBS’s Mola Lenghi ran a soundbite from Cuomo talking about the dangers of nursing homes — “All it takes is one person to bring that virus in there. And you do everything you can, but at the same time, you can’t do everything” — without giving the slightest hint of the Governor’s true record on the subject.

The first actual reference on an evening newscast came on the May 11 Nightly News, when correspondent Cynthia McFadden spent 13 seconds assuring viewers that “over the weekend, New York’s Governor Cuomo reversed his controversial policy forcing nursing homes to take back COVID patients.” As “controversial” as it was, Nightly News hadn’t bothered to tell viewers anything about it until it was over.

The only other reference last year came on July 20, as NBC’s Gabe Gutierrez accompanied Cuomo on a political stunt mission to Georgia, to criticize how southern Republican governors had managed the crisis.

Gutierrez squeezed in a 38-second exchange with Cuomo at the end of his report: “If you had to do it over again, would you have issued that same directive or was it a mistake?”

Cuomo rejected any responsibility: “We looked at this factually. If you look at when the nursing home deaths happened, it has no correlation to that order.” 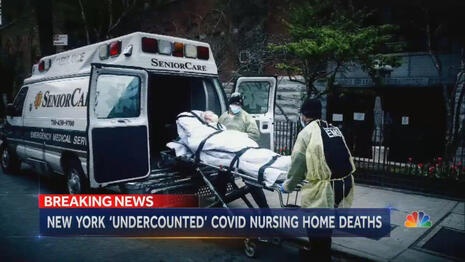 ■ 2021: Blockbuster Revelations, Minimal Coverage: During the past month, investigative digging by the Associated Press and New York Post, as well as a scathing report from a fellow Democrat, New York’s Attorney General Letitia James, revealed the truth: Cuomo’s administration concealed the true number of infected patients sent to nursing homes, and significantly under-reported the number of deaths among nursing home residents.

A top aide to Cuomo, Melissa DeRosa, told state Democrats that the true numbers were withheld from state legislators — out of fear, she claimed, of what the Trump administration might do with the truth. Federal prosecutors are now investigating whether the misconduct was criminal.

Yet while these blockbuster reports finally broke the media’s silence, it hasn’t exactly been an avalanche of coverage. In the past four weeks (January 28 to February 25), ABC’s World News Tonight has devoted exactly two minutes, 54 seconds to the story. The CBS Evening News produced only slightly more (three minutes, 11 seconds), while the NBC Nightly News logged four minutes 51 seconds of coverage.

Given the enormity of the consequences of Cuomo’s foolhardy and duplicitous approach, the puny amount of news coverage is a scandal in and of itself.