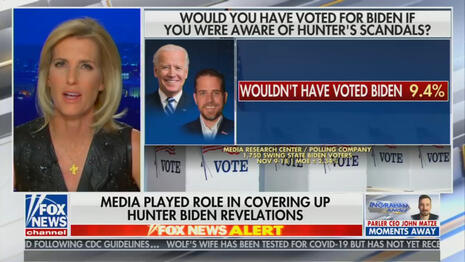 With news Wednesday night confirming that President-elect Joe Biden’s son, Hunter, is indeed under federal investigation, conservatives quickly pointed out that this was a story the liberal media and Big Tech suppressed in the weeks leading up to the November 3 presidential election — and cited the Media Research Center’s exclusive research to demonstrate the impact of this censorship.

The MRC commissioned two post-election polls proving how the media cover-up of the Biden scandal affected the outcome: a nationwide McLaughlin & Associates poll of 1,000 Biden voters found 36% were not aware of the scandal, and that 13% of these voters (or 4.6% of Biden’s total vote) say that had they known these facts, they would not have voted for the former Vice President.

A second poll of 1,750 Biden voters, conducted by The Polling Company, zeroed in on just the crucial swing states. It found nearly half of these voters (45.1%) said they were unaware of the financial scandal; if they had known, 9.4% of Biden voters told us they would have abandoned the Democratic candidate, flipping Arizona, Georgia, Michigan, Nevada, Pennsylvania and Wisconsin to Trump, giving the President a 311 electoral vote victory.

Here are clips from Wednesday night and Thursday morning showing conservatives citing the MRC’s work, and scolding the media and Big Tech for their failure to properly cover the story when it would have mattered: