Hiding Their Embarrassment? Nets Bury Disappointing Revelation that ‘Anonymous’ Is a Nobody 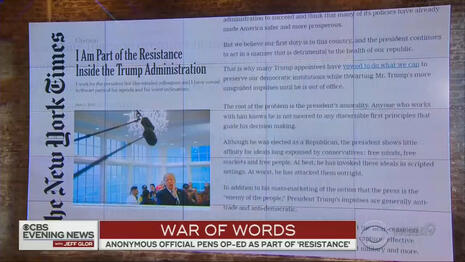 Back on September 5, 2018, all three networks treated as hugely important an “anonymous” op-ed from someone the New York Times described as a “senior” official in the Trump administration, unloading his list of grievances with the President. It was “jaw dropping,” “an extraordinary alarm,” and “the most daunting opposition he’s faced yet,” according to the Big Three that night.

It led all three newscasts that night, with nearly 15 minutes of airtime.

Now we know that the “senior” official wasn’t very senior at all, but the then-deputy chief of staff at the Department of Homeland Security, Miles Taylor, who’s gone on to become a paid talking head on CNN, where he continues to take potshots at the President.

So how did those newscasts last night play the fact that they were conned by the New York Times and a low-level flunkie? They barely mentioned it. 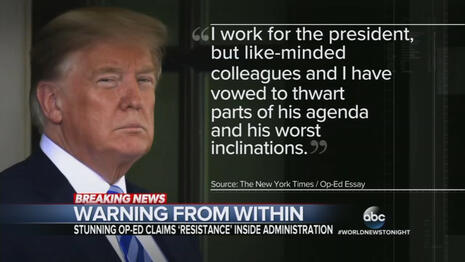 Two years ago, my colleague Nick Fondacaro documented, “ABC’s World News Tonight spent the most time at five minutes and 48 seconds. CBS Evening News clocked in at four minutes and 44 seconds. NBC Nightly News brought up the rear (but still close behind) with four minutes and 12 seconds.”

Last night, ABC again offered the most coverage, but this time just a meager 46 seconds. To his credit, correspondent Jon Karl actually admitted that the Times description of anonymous had tricked him: “I think many people were under the impression — I know I was — that the article was written by somebody with a much more senior role.”

That’s not something you heard on NBC, where correspondent Hallie Jackson snuck in just 15 seconds of airtime, where she merely declared the end of a “years-long Washington guessing game.” She misleadingly referred to Taylor as “chief of staff to the former Homeland Security secretary,” even though he was only a deputy at the time he penned the op-ed.

The CBS Evening News, which pumped out nearly five minutes of coverage two years ago, was silent about Taylor last night.

Here are the full transcripts of the puny amount of coverage offered viewers last night, followed by a video compilation of a small taste of the coverage from 2018:

HALLIE JACKSON: Tonight, a years-long Washington guessing game came to a close when Miles Taylor revealed himself as the anonymous official behind an explosive 2018 op-ed about resistance inside the Trump administration. Taylor was chief of staff to the former Homeland Security Secretary.

DAVID MUIR: And there was another headline, Jon, you’re following. We all remember sometime back, the New York Times publishing that op-ed from an anonymous administration official, describing himself as part of, quote, “the resistance” inside the Trump administration. And today that anonymous official actually revealing himself?

JONATHAN KARL: The anonymous official is someone named Miles Taylor, hardly a household name. At the time, he was the deputy chief of staff for the Secretary of Homeland Security. I think many people were under the impression — I know I was — that the article was written by somebody with a much more senior role. Miles Taylor wrote today that he also wanted to recognize the officials who spoke out but did not do so anonymously, saying, quote, “history will also record the names of those souls who had everything to lose, but stood up anyway.”