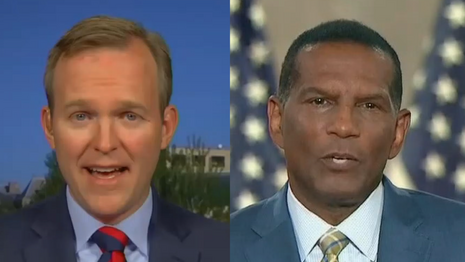 One of the closest congressional contests in 2020 is the race for Utah’s 4th district, pitting freshman Democrat Rep. Ben McAdams against former NFL player and businessman Burgess Owens. A poll conducted in late July by the Hinckley Institute of Politics and The Deseret News found it to be an absolute tie, with each candidate garnering 35 percent of the vote, and another 24 percent saying they didn’t know for whom they’d vote.

But The Deseret News has, through its news coverage, created a favorable environment for the Democratic candidate and his message, even as it repeatedly hammers the Republican on an array of personal controversies, according to a study by the Media Research Center.

For this report, our analysts reviewed all news coverage during the ten weeks after the general election phase began on July 2 (after Owens claimed victory in the Republican primary) through September 10. We used the Nexis database to retrieve all Deseret News stories which mentioned either “McAdams” or “Owens,” excluding clearly-labeled opinion pieces, as well as two letters to the editor which appeared during this time.

Out of the 40 news stories we examined, McAdams was referenced in 39 (97.5%), while Owens was mentioned in 26 (65%). But a number of these stories, especially those about national politics, only offered a scant mention of Utah’s Democratic Representative, so our analysts looked at how many paragraphs within these stories actually mentioned one or both of the candidates. Using this more precise measure, we found near-parity: 231 paragraphs referred to the Republican, Owens, vs. 237 mentioning McAdams — an almost-perfectly balanced 49.4% to 50.6% split.

The topics of these stories, however, tell a very different story. Owens has been repeatedly targeted with negative stories, while McAdams has escaped scrutiny.

There was also a brief mention in another story (just one paragraph) that Owens raised money for the border wall project associated with Steve Bannon, which has led to federal fraud charges against the former Trump advisor.

Positive topics for Owens included his speech to the RNC (five stories, 59 paragraphs); his upbringing in the segregated South, and how his great-great-grandfather escaped from slavery to become a success in Texas (seven stories, 14 paragraphs).

During these same weeks, there were essentially no negative topics about McAdams, but rather an assortment of positive stories which reinforced his campaign themes of independence and service on behalf of Utahns: 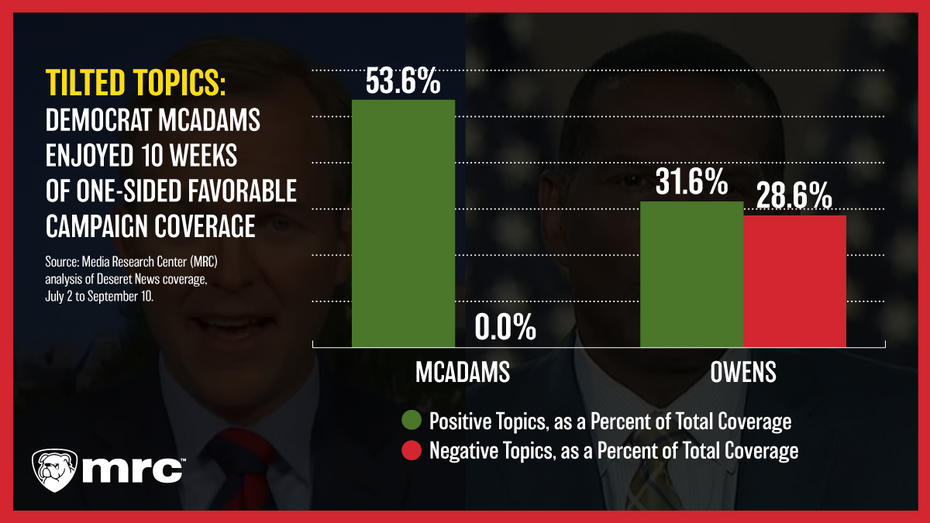 A sampling of these stories reveals the flavor of this coverage. The July 14 feature story on Vietnam War veteran Douglas Evans, for example, included the vet’s praise of McAdams for his assistance in obtaining a Purple Heart medal 56 years overdue: “They said the only person that can do anything is probably Congressman McAdams because he’s done a lot for the soldiers.”

(Note: This report is using the date of the newspaper in which the article appeared, not the date that they were posted to the web site.)

The next day, The News’s Art Raymond snuck in a brief (positive) mention of McAdams in a much longer piece on the federal government’s coronavirus relief bill: “Utah Democrat Rep. Ben McAdams has been a vocal advocate on behalf of transparency and accountability issues related to the Paycheck Protection Program since its launch in early April....”

A little more than two weeks later (July 30), the newspaper devoted 28 paragraphs to the push to name a federal courthouse after retired GOP Senator Orrin Hatch, most of which (15 graphs) focused on McAdams’ work. Reporter Matthew Brown ended the piece with Hatch’s obligatory praise of the Democrat: “Congressman McAdams is a good man, and I respect him very much. I’m both humbled and grateful that he would be willing to spearhead this bill.”

And a September 2 article shown a spotlight on McAdams’ work on a bill to support mental health workers, including a salute from Taryn Hiatt, the Utah area director for the American Foundation for Suicide Prevention. “‘There’s no partisanship here. This affects all of us as humans, and we have to work together, regardless of how you’re affiliated,’ she said, praising McAdams’ efforts as well as those by Republicans in the Utah delegation,” wrote The News’s Lisa Riley Roche, whose byline appeared on nearly half of the stories we reviewed (18 out of 40, or 45%).

During those same weeks, Republican Burgess Owens faced an onslaught of negative stories about his supposed extremist views as well as controversies ginned up by the left-wing group, Media Matters. On July 5, Roche solicited the views of various political pundits such as The Cook Political Report’s David Wasserman who, as Roche summarized, “suggested Owens may be too extreme for many 4th District voters.”

That same theme was reinforced on July 19, with a big piece about how Owens “is being tied to a group of far-right conspiracy theorists, after reports surfaced he promoted his campaign on a ‘QAnon’ program.” Despite Owens’ spokesman making it clear that the candidate had no idea about the views of the hosts, Roche wrote as if the “link” between Owens and QAnon was a fact: “Utah Republican Party Chairman Derek Brown declined to comment Friday on Owens being linked to Qanon....”

Roche sought out an expert, Chris Karpowitz of BYU’s Center for the Study of Elections and Democracy, who reinforced the negative take, “calling it ‘electorally dangerous to dabble in these sorts of extreme views.’” Yet Owens’ actual appearance on the show was to promote his campaign, hardly a sign of “extreme views.”

On August 28, The News ran a full story on Owens’ meeting with the newspaper’s editorial board, where he was evidently confronted with another attack from Media Matters “that he plagiarized material from sources ranging from Wikipedia to a relatively obscure blog for sections... in his latest book.”

The following week (Sept. 4), the paper ran a second piece, this time on the Democratic candidate’s meeting with the same group of editors. With McAdams, there was no suggestion that the candidate was confronted with a negative attack; instead, the news article channeled his views on today’s political divide: “He decried the current state of politics, saying he’s ‘never seen it this bad in my lifetime and it breaks my heart.’”

As a freshman Democrat who last time barely won (by 694 votes) a district which includes many Republican voters, McAdams’ natural strategy would be to downplay his national party ties and instead stress bipartisan efforts on behalf of his constituents. Our analysis of The Deseret News’s coverage of the first ten weeks of this campaign certainly reinforces these McAdams’ campaign objectives.

On the other hand, a challenger such as Owens needs to demonstrate he’s an acceptable choice to voters who would be inclined to vote Republican. The steady drumbeat of negative controversies which appeared in The Deseret News’s news pages, many promoted by an outside left-wing group, would be an obvious impediment to his campaign’s goals.

Unlike opinion-based journalism, campaign news coverage should inform voters so they can make up their own minds, based on their own values and preferences. It should not steer voters toward one side or the other. In this case, the news pages of The Deseret News are violating that standard.