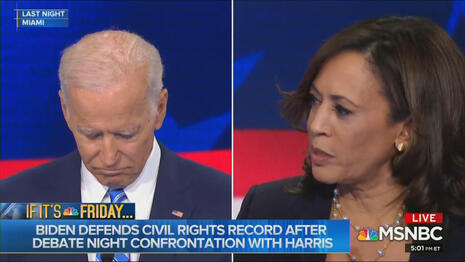 Whoever Joe Biden picks as his running mate, they’re almost certain to be treated to a hero’s reception by the liberal media. But if Biden picks California Senator Kamala Harris, the positive coverage she’ll receive this week could still pale next to the fawning coverage she garnered last June, when she was cheered as a “star” for her radical takedown of the man from whom she’s now seeking a promotion.

At a June 27, 2019 Democratic debate televised on NBC, MSNBC, and Telemundo (and watched by 18 million people), Harris used left-wing arguments to hit Biden over his opposition to forced busing in the early 1970s (when polls showed neither white nor black voters favored the policy).

“I do not believe you are a racist,” Harris told Biden. “[But] it was hurtful to hear you talk about the reputations of two United States senators who built their reputations and career on segregation of race in this country. And it was not only that, but you also worked with them to oppose busing. And, you know, there was a little girl in California who was part of the second class to integrate her public schools. And she was bused to school every day. And that little girl was me.”

It may have been an unfair attack on Barack Obama’s loyal Vice President, but the liberal media loved it. CNN’s Van Jones immediately declared of Harris, “a star was born,” a sentiment plagiarized the next day by MSNBC’s Chris Matthews (“a star was born”) and repeated by CBS’s Gayle King to Harris herself in a puffball interview the next morning: “I’m hearing words like, ‘a star is born.’...” 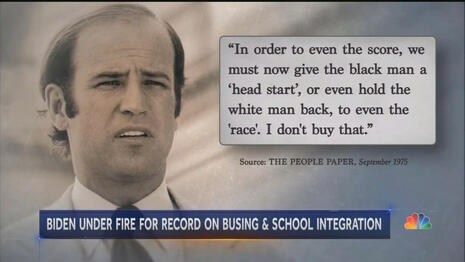 For Biden, the media coverage was dreadful, as reporters dug up comments he made in the 1970s that are hopelessly at odds with today’s “woke” Democratic Party. On NBC Nightly News, Geoff Bennett publicized this blast from the past: “Biden telling a Delaware newspaper in 1975 he didn’t buy the concept that ‘in order to even the score we must now give the black man a head start or even hold the white man back to even the race. I don’t buy that.’”

Over time, of course, Harris faded and Biden held on to enough of his establishment support to win a two-man race against the Democratic socialist Bernie Sanders. But according to Politico, Harris’s debate performance still rankles Biden allies:

When former Sen. Chris Dodd, a member of Joe Biden’s vice presidential search committee, recently asked Kamala Harris about her ambush on Biden in the first Democratic debate, Dodd was stunned by her response.

“She laughed and said, ‘that’s politics.’ She had no remorse,” Dodd told a longtime Biden supporter and donor, who relayed the exchange to Politico on condition of anonymity. “Dodd felt it was a gimmick, that it was cheap,” the donor said.

Embarrassing as it was for Biden, the media loved it. To this day, it’s still the best 24 hours of media coverage Kamala Harris has received in her career — and it was all at Joe’s expense, even though his policy in the 1970s was the one actually favored by most Americans.