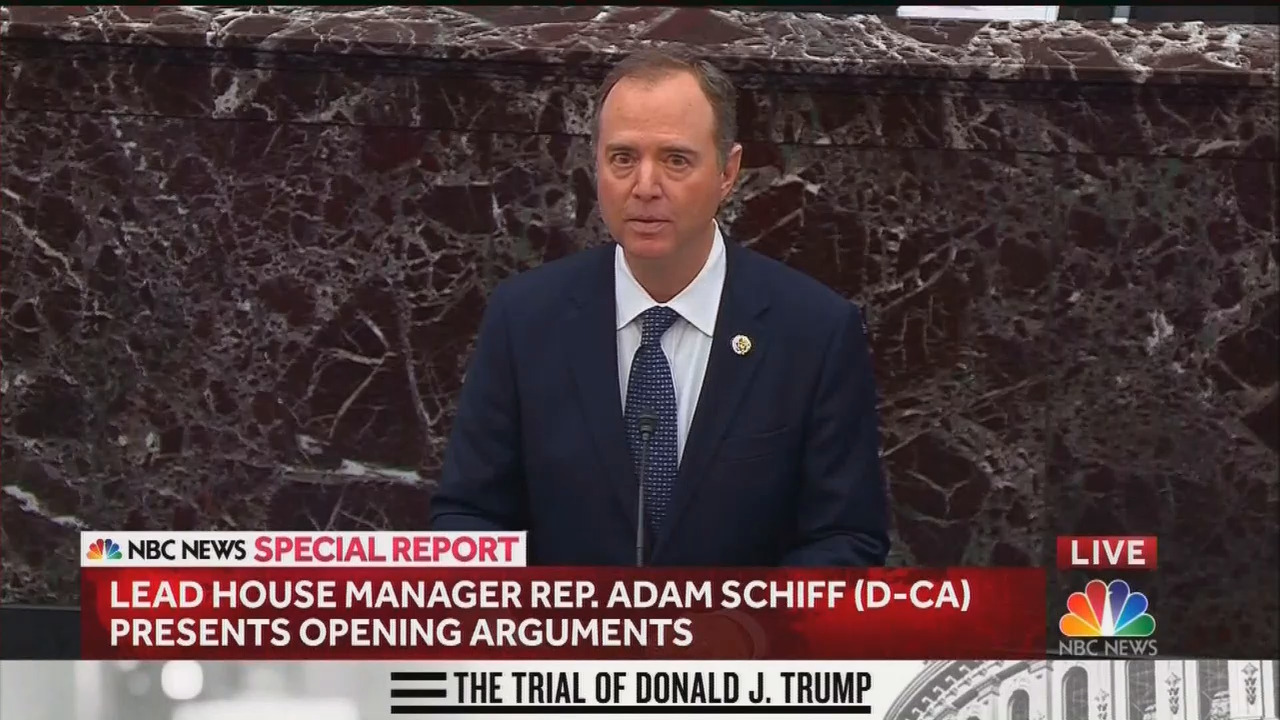 The ratings are in for the first day of the Democratic House Managers impeachment arguments in front of the Senate, and the broadcast networks (ABC, CBS and NBC) collectively lost about three million viewers who would have been expected to watch their normal fare of daytime soap operas.

According to preliminary Nielsen data posted on TVNewser.com, just over 4 million people watched the first day of the Democrats’ opening arguments on Wednesday on the broadcast networks, who handed over vast swaths of their daytime programming to the impeachment trial. Among the Big Three, CBS saw 1.52 million average viewers, followed by ABC and NBC, with 1.29 million and 1.26 million, respectively.

These numbers are actually down from the 5.1 million average viewers who tuned in these networks for Tuesday’s tedious debate about the rules for the Senate trial.

[UPDATED, 3:55pm ET: The ratings for Thursday's Day 2 of Democratic arguments were even lower than Wednesday's, with a combined 3.8 million across the three broadcast networks.]

Cable news added an additional 4.8 million viewers to the total on Wednesday, but that’s also lower than the 6 million who watched Fox News, MSNBC or CNN on Tuesday. Apparently, there’s a higher audience for a back-and-forth between the two sides than for a multi-hour Democrat-only presentation of the same material that’s been the topic of most news coverage for the past four months.

By suspending regular programming and joining cable news in providing hours of live coverage, the broadcast networks are signaling that viewers should consider the Senate trial a momentous, historic occasion. But viewers aren’t buying it.

On an average weekday, ABC, CBS and NBC run daytime dramas that attract far more viewers than tuned in to the supposed history of the Senate trial. CBS’s The Young and the Restless and The Bold and the Beautiful have attracted an average of 3.70 and 3.15 million viewers this season, or twice as many as watched CBS’s installment of the Schiff Show on Wednesday.

ABC’s General Hospital can be expected to garner 2.15 million viewers on an average weekday, or 860,000 more than watched the Democrats’ opening day. NBC’s Days of Our Lives, the laggard among soap operas with 1.95 million average viewers this season, would still have delivered nearly 700,000 more viewers than the trial.

Add it all up, and it seems about three million loyal TV watchers changed the channel away from the Big Three’s Senate trial show.

And some loyal soap opera fans are venting their anger at the decision to run the same event that’s available on all of the cable news networks. An article on Soaps.com about how the impeachment trial would pre-empt the soap operas drew some stinging reactions:

“This impeachment is pathetic,” one commenter declared. “General Hospital is more important than the ridiculous impeachment.”

“Why are they torturing the viewers?!?!?!!?” another asked. “If you must show that garbage during the day at least have the episode to watch on line at night.”

Another wrote: “theses people r on a witch hunt let him [Trump] continue the good wk he’s doing n let us watch our soaps.” (spelling and grammar as in the original) 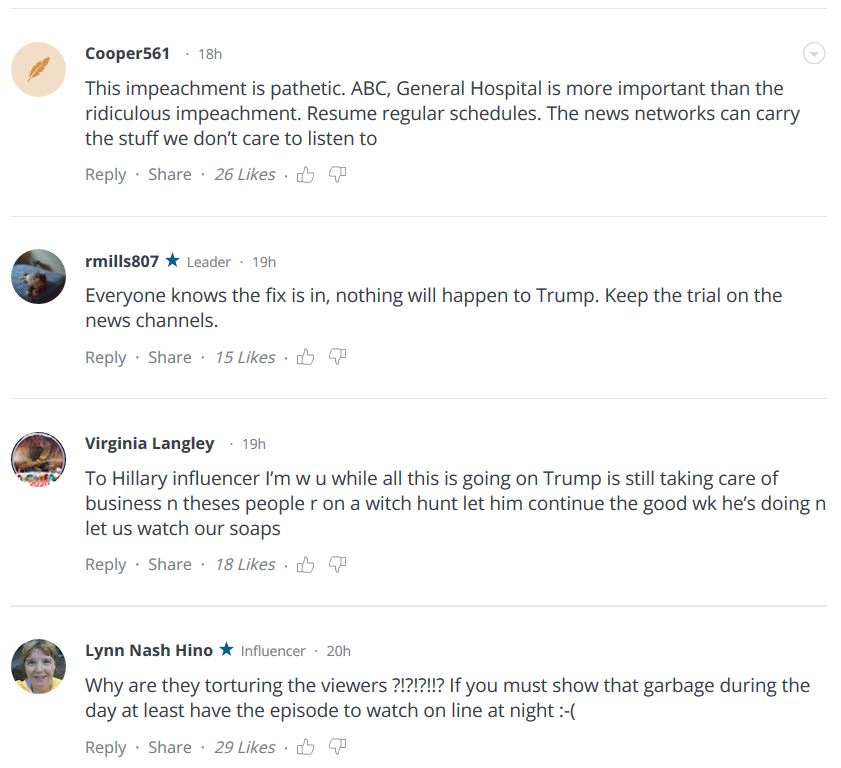 If the ratings continue to slide, there’s a chance these viewers could get their wish.