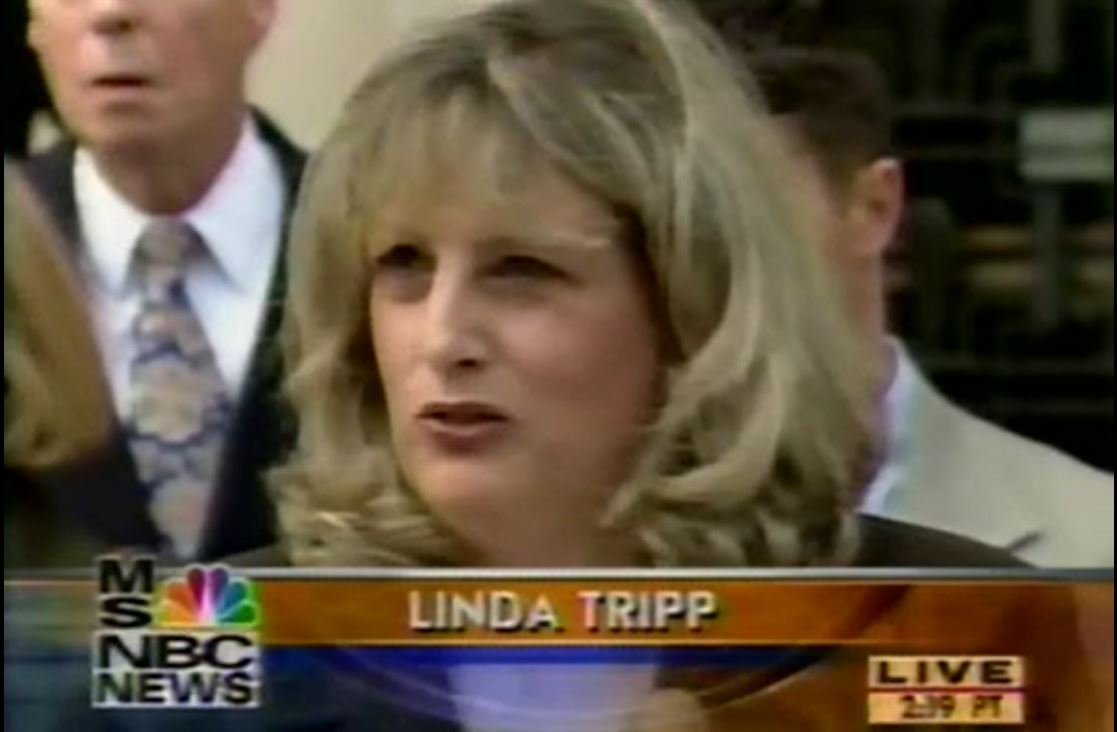 The anonymous whistleblower who complained about President Trump’s July phone conversation with the leader of Ukraine is being touted and toasted across the liberal media, but it was a far different story 21 years ago when a Pentagon employee named Linda Tripp helped bring Bill Clinton’s perjury and obstruction of justice to the attention of Independent Counsel Ken Starr.

For daring to undermine a Democratic President, the media had nothing but contempt for Tripp, who journalists disdained as a “pathetic, self-destroying older loser,” a “spy-provacateur,” and a “treacherous, back-stabbing, good-for-nothing enemy of the truth.” Time’s Margaret Carlson said Tripp “lost membership in the family of man” by recording her phone conversations with Clinton’s paramour, Monica Lewinsky. CNBC’s Geraldo Rivera said Tripp was a “betrayer on the order of Benedict Arnold,” while Newsweek tagged her a “friend-betraying Cruella de Vil.”

In an online poll, ABCNews.com put Tripp in the same league as mass butchers Slobodan Milosevic, Osama bin Laden and Saddam Hussein. Even after impeachment, journalists felt comfortable using Tripp’s name as an epithet, as when NBC’s Katie Couric scolded George Stephanopoulos as “kinda creepy... a Linda-Tripp type,” because his memoir included too much personal information about Bill Clinton: “You’re airing all the dirty laundry, and some people just think that’s sorta gross.”

While the media are in full fret mode about the imagined consequences that might befall the Trump whistleblower if his (or her) name is publicized, it’s a matter of fact that Clinton’s Democratic administration took vindictive steps against Tripp. Pentagon spokesman (and former Wall Street Journal reporter) Kenneth Bacon and his aide leaked confidential personnel information about Tripp to The New Yorker’s Jane Mayer for a hit piece. Most of the media yawned. Years later, the government paid Tripp $595,000 to settle the case.

Here are just a few examples of the media’s despicable treatment of Tripp, from the MRC’s archives [UPDATED 10/4, to include segment on FNC's Hannity, October 3, with video of some of these quotes]:

■ Co-host Ann Curry: “Exactly what kind of a friend would do to Monica Lewinsky what Linda Tripp did?”
Psychologist Sylvia Gearing: “A poor friend....I cannot believe that someone who professes to be a friend could go about scheming the way that she did and absolutely defying and violating Monica the way that she did.”
— Exchange on NBC’s Today, February 2, 1998.

■ “Friends don’t tape friends, so could we all quit calling Linda Tripp anything but the spy-provocateur she is? Nothing in this mess is more inexplicable than how anyone could record, day after day, the most intimate details, real or imagined, of another person’s life.”
— Time columnist Margaret Carlson, February 9, 1998.

■ “Kathleen Willey also spoke about Linda Tripp, a Clinton-basher who seems to be at every ugly turn in this controversy. Tripp was outside the Oval Office when Willey emerged from her encounter with the President. Just how is it that Linda Tripp is so often conveniently involved in the President’s troubles? For some clues let’s bring in The New Yorker’s Jane Mayer, who has profiled the controversial Miss Tripp in this week’s issue. You write that co-workers often viewed her as an inveterate busybody. Has she always been a snoop and a gossip with a particular interest in other people’s romantic lives?”
— Bryant Gumbel on Public Eye, March 17, 1998.

■ “If it comes to trial, Linda Tripp will be facing some severe questioning by Monica Lewinsky’s very capable counsel. And my God, a first year law student hearing those tapes will be able to make her look like exactly what she is: a treacherous, back-stabbing, good-for-nothing enemy of the truth.”
— Geraldo Rivera on CNBC’s Rivera Live, June 26, 1998.

■ “Tripp lost membership in the family of man when day after day she looked into Monica Lewinsky’s eyes as a friend and at night hit the ‘on’ button on her Radio Shack tape recorder. No, there’s enough about Tripp to criticize without getting to the heart of her darkness. While we are trying to make up our minds about the other characters in the drama, she can safely be cast as a villain — the Mark Fuhrman of the Starr investigation — because of her perfect rendition of the friend from hell.”
— Time’s Carlson responding to Jonah Goldberg in a Slate “dialogue” about Linda Tripp, June 30, 1998.

■ “Addressing an ungrateful nation from the courthouse beach, as the grand-jury stakeout is known, and shaking like a leaf, Tripp made a desperate effort to humanize herself as a truth-seeking patriot, a ‘suburban mom’ protecting her kids. ‘Who am I?’ she began. ‘I’m you,’ she answered, ‘an average American.’ I shouted back at the TV, ‘No, you’re NOT! Take that back!’”
— Carlson in Time, August 10, 1998.

■ “After reading the transcript of her [Monica Lewinsky’s] testimony to the grand jury, some of it was absolutely charming....Her last sentence was, ‘I just hate Linda Tripp.’”
— Bob Schieffer, host of CBS’s Face the Nation, on CNBC’s Tim Russert, September 26, 1998.

■ “The story of Linda Tripp’s betrayal is really very unappealing and she comes off as a conniving and really not a likable person.”
— ABC legal analyst Jeffrey Toobin on the tapes released, October 2, 1998 World News Tonight.

■ New York Daily News columnist Mike Lupica: “What the Yankees have done across this summer is, they have taken away an American constant. I think people could count on hating the Yankees at this time of year. It’s like, it’s like hating Linda Tripp. You know, I mean, it’s just something you can count on.”
Co-host Lisa McRee, laughing: “It’s easy.”
— Good Morning America, October 5, 1998.

■ “If there were an Ig-Nobel Peace Prize, who would win it?”
○ Slobodan Milosevic
○ Osama bin Ladin
○ Saddam Hussein
○ Linda Tripp
— “What do you think?” question of the day on the ABCNews.com home page, October 15, 1998.

■ “I thought that Linda Tripp now takes her place in the Hall of Infamy as a betrayer on the order of Benedict Arnold in the, at least, in the love ’90s...I think anybody who wrapped themselves around Linda Tripp and her tapes is now soiled. You felt the need to take a shower. What that woman did to her young friend is beyond the pale. I think it’s much worse than anything Bill Clinton did.”
— Geraldo Rivera on NBC’s Today, November 18, 1998.

■ “Hello, good evening and welcome back to Hell....Okay, one of them [Lewinsky] will read the part of the irresponsible adolescent, the other [Tripp] will narrate the lines of the pathetic, self-destroying, older loser, and you and I will be Polonius, hiding ourselves behind the arras.”
— Keith Olbermann opening his November 17, 1998 Big Show on MSNBC, after audio tapes of Lewinsky and Tripp’s phone conversations were released.

■ “Which brings us to Linda Tripp, the woman people love to hate...[She] is now a recognized soldier in the army of Clinton haters, among them Tripp’s friend and svengali, Lucianne Goldberg.”
— ABC’s Diane Sawyer during her November 25, 1998 20/20 interview with Independent Counsel Ken Starr.

■ “A lot of people, George, think that this is just kinda creepy, that you’ve done this. They see you as a turncoat, a Linda-Tripp type, if you will, who sort of ingratiated himself with the people inside the White House. They made you who you became, and now all of a sudden you’re telling, you’re airing all the dirty laundry, and some people just think that’s sorta gross.”
— Co-host Katie Couric to George Stephanopoulos during his book tour plugging his memoir All Too Human, March 12, 1999 Today.