TV news coverage of President Donald Trump was just as hostile (92% negative) in May as it was in the months immediately before Special Counsel Robert Mueller delivered his final report in March, according to the latest analysis by the Media Research Center.

In fact, the Russia investigation now accounts for twice as much of President Trump’s overall evening news coverage as it did prior to the report’s completion. At the same time, TV news viewers heard three times as many references to “impeachment” compared to before Mueller concluded there was no campaign conspiracy with Russia, while making no determination about potential obstruction of justice.

For this report, MRC analysts reviewed all 1,806 minutes of Trump coverage on the ABC, CBS and NBC evening newscasts from January 1 through May 31. More than 513 minutes of that time was spent on the Russia probe, or roughly 28 percent of the total.

Despite the Mueller report’s lack of an anti-Trump smoking gun, the broadcast networks actually became more invested in the Russia story, as their total coverage jumped from 196 minutes from January 1 to March 21 (19% of Trump’s total airtime) to a whopping 317 minutes from March 22 through May 31 (nearly 42% of all of the President’s coverage).

Network news reporters also ramped up their discussion of impeachment, mentioning the possibility in an average of 22.4 evening stories per month in the wake of Mueller’s report, nearly triple the 7.7 stories/month we found during the first part of the year. To provide a flavor of the media’s impeachment-hungry coverage, MRC’s Bill D’Agostino has assembled clips from some recent broadcasts:

And, aside from a brief two-day period following Attorney General William Barr’s March 24 letter outlining the key findings of the report, evening news coverage of the Trump administration has been fiercely negative.

In January, February and the first part of March, our analysts tabulated 926 evaluative statements made by reporters, anchors, or non-partisan sources (such as voters or experts). Only eight percent of these comments were positive, compared with 92 percent that were critical of the President or his administration. (Comments from partisan sources, as well as neutral statements, were not included.) 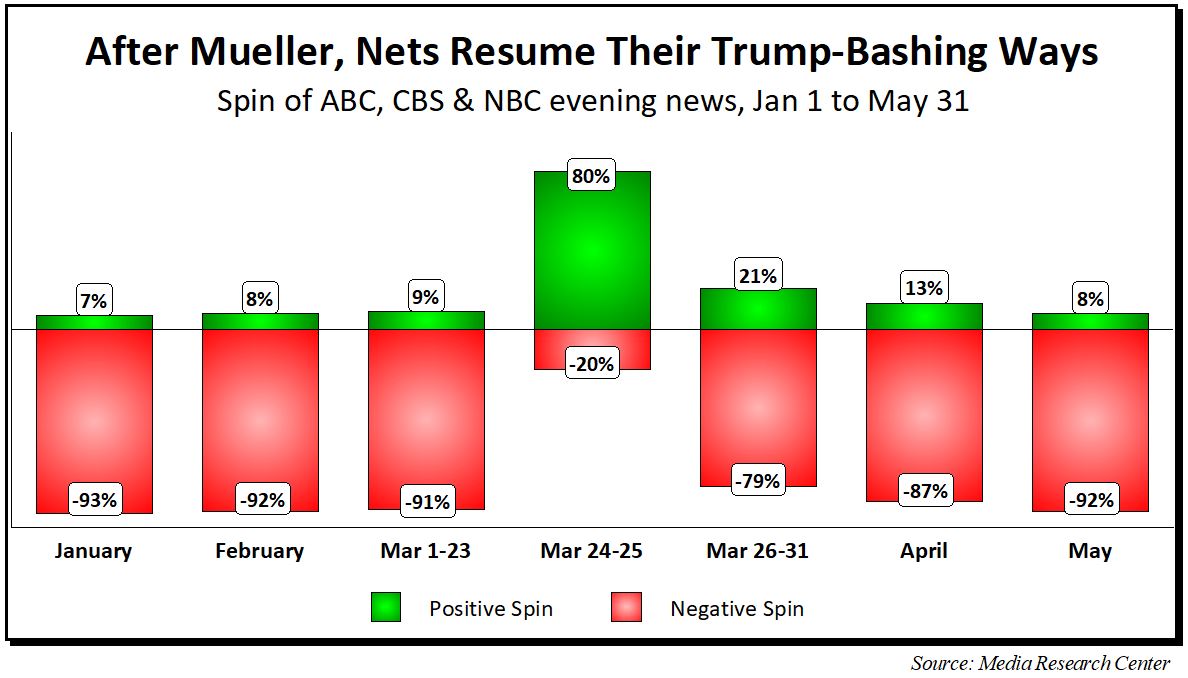 In their March 24 and 25 evening newscasts, immediately following the release of Barr’s letter, most (80%) of the networks’ coverage of the President was actually positive, but the honeymoon was short-lived. From March 26 through the end of May, the evening news spin once again became predominantly hostile, reaching 92 percent negative in May.

As he reiterated in his news conference last week, Robert Mueller refused to charge the President with any wrongdoing. Judging by the increasingly negative spin of their coverage, the liberal media have evidently decided to bypass Mueller and make that charge themselves.