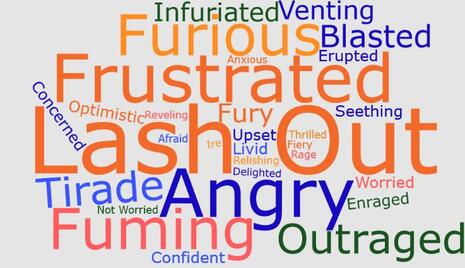 While he won’t be on the ballot this November, President Trump and his performance in office will be a key issue in this year’s midterm elections. But before the campaigning starts in earnest, TV news reporters have saturated the airwaves with subjective language about the President’s emotional state, most of it casting him as an out-of-control hothead.

MRC analysts looked at every broadcast evening news story about the President from January 1 through September 10, and tallied the various words reporters have used this year to describe Trump’s state of mind, grouping them by category.

Add it all up, along with a few miscellaneous terms, and Trump has been described as angry 185 times this year, or roughly 20 times per month. ABC’s World News Tonight has accounted for more than half of this language (106) — twice as much as heard on NBC’s Nightly News (53) and four times the descriptions found on the CBS Evening News (26).

Watch the video for a flavor of the tone of this year’s coverage:

On May 20, for example, ABC’s David Wright told viewers: “President Trump [is] on the warpath, demanding answers about reports that the FBI had an informant approach the Trump campaign.”

And on September 7, after the “anonymous” op-ed appeared in the New York Times, chief White House correspondent Jon Karl said the President was “enraged at the idea of an enemy within his own administration.” As if other Presidents would be mellow about that?

CBS’s and NBC’s reporters also attempted to psychoanalyze the Commander-in-Chief, just not as frequently. Back on March 2, for example, NBC’s Hallie Jackson said the President “became unglued this week, in the words of one source,” which left him “seething and spoiling for a fight.”

But on August 25, NBC correspondent Geoff Bennett told viewers that “people close to the President describe his mood as calm” — the only time the word “calm” was used by an evening news reporter to describe Trump’s demeanor this year.

Besides the various synonyms for anger, reporters also described the President as “frustrated,” “aggravated,” or “dismayed” a total of 30 times, while viewers heard him called either “worried,” “anxious,” “shaken,” or “afraid” on 14 occasions — outstripping the six instances when he was cast as “confident,” “relieved,” or “not worried.”

On the flip side, reporters described Trump’s state of mind as happy a total of 23 times, using words such as “ecstatic,” “delighted,” “thrilled,” and “gleeful.”

Don’t think this coverage hasn’t affected the public’s perceptions. A Quinnipiac poll released on September 10 showed 65 percent of voters thought the President was “not level-headed,” compared to 30 percent who thought he was level-headed, while a 55 to 41 percent majority said Trump “is not fit to serve as President.”

After a year of news coverage casting him as a one-man rage machine, it’s a wonder that the President’s numbers aren’t worse than they are.