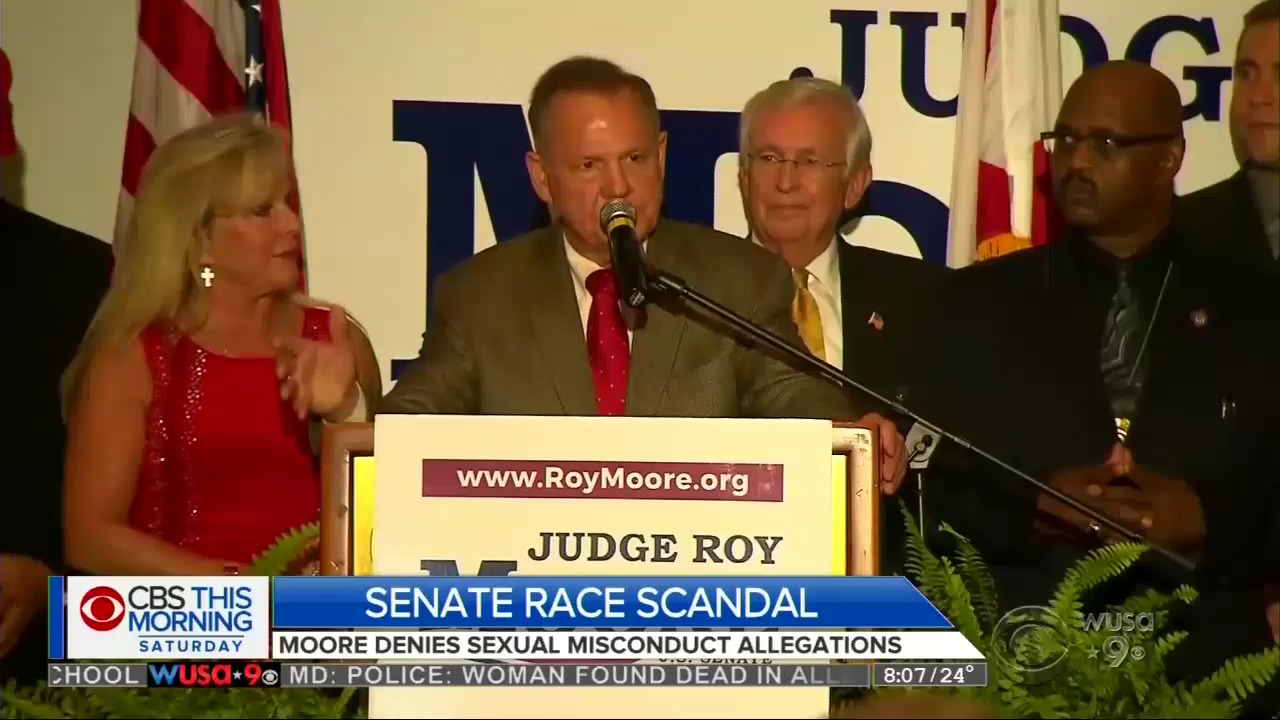 [UPDATE, Nov. 15: As of the November 15 morning shows, ABC, CBS and NBC have generated a total of 125 minutes, 11 seconds of coverage of Moore’s scandal in Alabama. MRC’s tally of Menendez coverage remains unchanged at 2 minutes, 10 seconds, with no new coverage on the broadcast networks since September 13.]

For the past four days, the establishment media have provided intensive coverage of the scandal involving Alabama GOP Senate candidate Roy Moore, with reporters repeating the damning accusations against the candidate and the “mounting pressure” for Moore to quit the race.

The media’s reaction to Moore makes their double standard on scandals all the more glaring: Since early September, a sitting United States Senator has been on trial for corruption involving the abuse of his office, and the media have essentially buried the story. 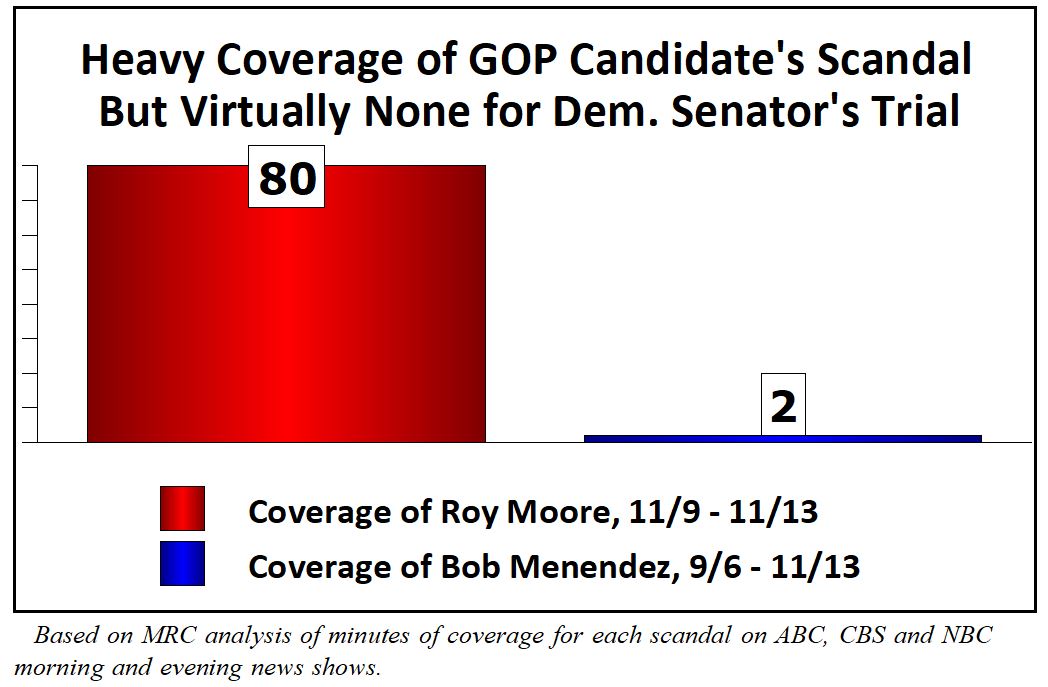 Contrast those statistics with those same newscasts’ paltry coverage of the trial of Democratic Senator Bob Menendez of New Jersey. Since the trial began on September 5, NBC has offered no coverage whatsover.

CBS’s coverage consisted of a single, 22-second item on the September 6 edition of CBS This Morning, recapping the start of the case: “The New Jersey Democrat is accused of doing political favors for a Florida eye doctor in exchange for campaign donations and very lavish gifts.” 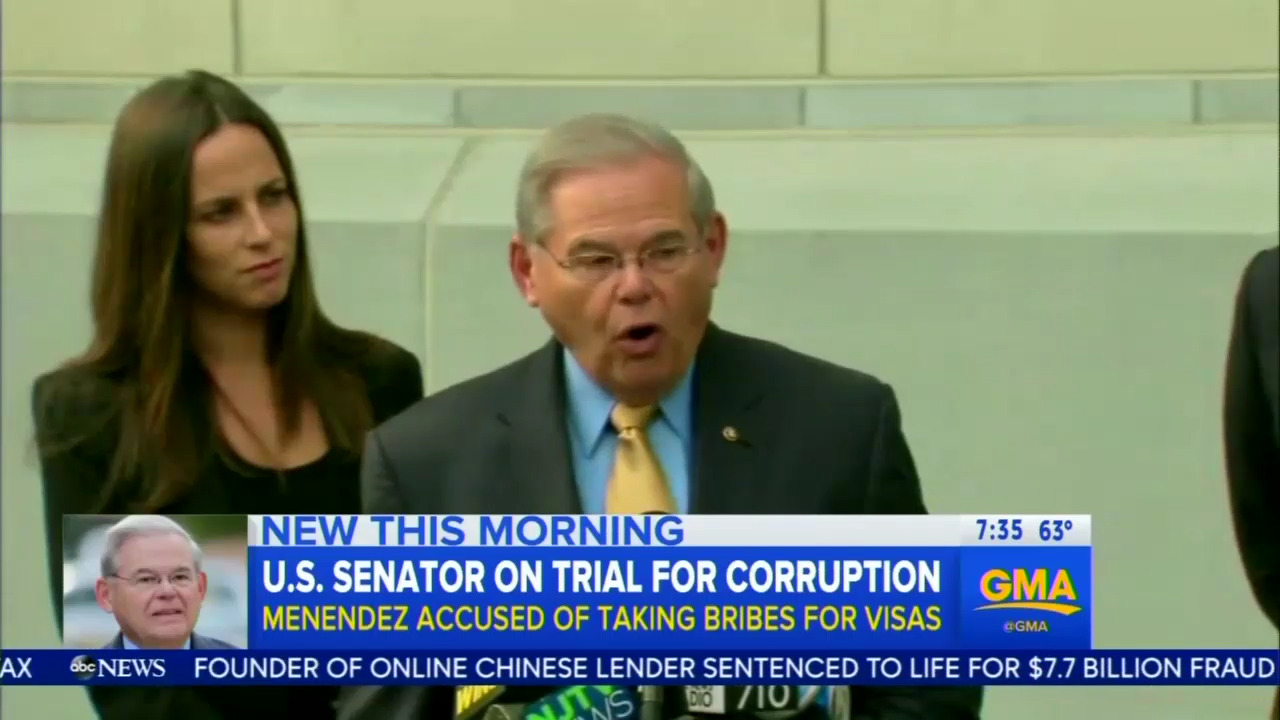 A week later, ABC’s Mary Bruce offered a short (1 minute, 48 second) summary on Good Morning America that was light on the details of the case: “At times this case sounds a bit more like an episode of Scandal: Bribery charges, mistresses and alleged abuse of power — and at the heart of it all, a U.S. Senator on trial for federal corruption.”

Add it all up, and the Moore scandal has already consumed nearly 40 times more airtime on the Big Three networks’ than a Democrat’s corruption trial — even though the Menendez case is based on an actual federal prosecution, as opposed to a story in the Washington Post.

Writing on National Review’s web site in early October, John Fund showcased some of the key facts that have failed to grab the networks’ attention:

Menendez accepted a series of gifts from Salomon Melgen, a Florida eye doctor who has been convicted of Medicare-reimbursement fraud. Menendez accepted numerous flights on a private jet, vacations in Paris and the Caribbean, and nearly $800,000 in campaign contributions from Dr. Melgen. Prosecutors have built a case that, in exchange for those gifts, Menendez lobbied to allow Dr. Melgen to keep nearly $9 million in ill-gotten Medicare payments, arranged for U.S. visas for Dr. Melgen’s foreign girlfriends, and applied pressure on the Dominican Republic over a port-security contract Melgen owned.

Menendez said that the two men have known each other for more than 20 years and have often exchanged gifts. Therefore, he claimed, there was no bribery. Legal analysts clearly disagree. “The case against Menendez as a legal matter doesn’t look close, it looks overwhelming,” says MSNBC’s chief legal correspondent, Ari Melber. “If a politician can take the kind of gifts Menendez has already taken and then be acquitted, then you have to wonder if there’s something wrong with all of these corruption laws in the first place.”

Writing in the New York Post, Phil Kerpen observed that the Senator’s relationship with Dr. Melgen “allowed Menendez to enjoy a lifestyle far beyond his legitimate income of $174,000. It was a life of luxury funded by one of the largest Medicare frauds in history, a $105 million scheme for which Melgen has already been convicted on 67 counts of fraud in a separate federal trial in Florida.”

“His breach of the public trust is so severe,” Kerpen concluded,” that if the Senate Ethics Committee is worthy of its name, he will be expelled from the Senate regardless of the verdict.”

In fact, the near-absence of media coverage makes it almost impossible to see public pressure forcing Democrats to dump Menendez, even if he’s found guilty. On the other hand, network reporters are stoking the demands that Moore depart the scene without any kind of judicial verdict. 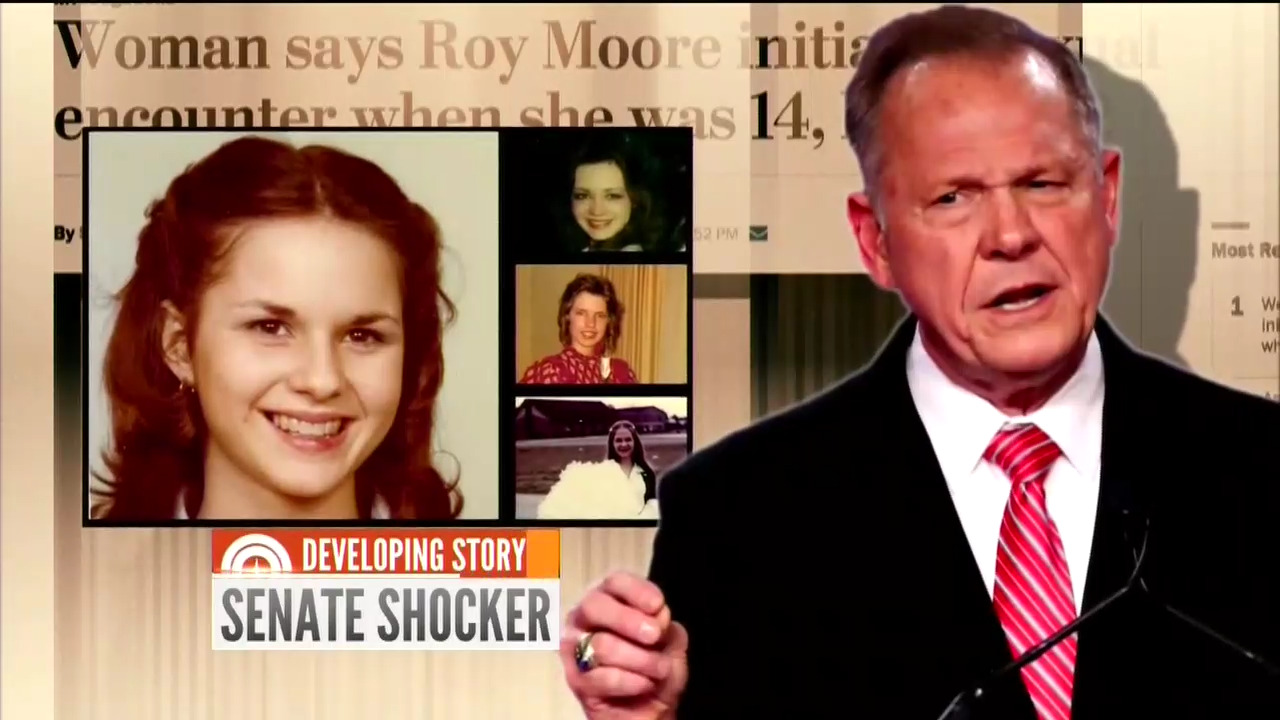 The next morning, CBS’s Paula Reid saw more “pressure mounting on Roy Moore to step aside amidst allegations of sexual misconduct.” And on Sunday’s World News Tonight, ABC’s Stephanie Ramos said Moore was “refusing to back down against mounting pressure to drop out of the Alabama Senate race.”

The lack of heavy coverage means no equivalent “mounting pressure” being brought by the media against Democrats hoping to keep Menendez in place until New Jersey’s next governor, a Democrat, is inaugurated in January. And, according to Politico, Democrats are unlikely to expel Menendez if the choice is up to them:

Democrats are already quietly strategizing on how to respond if he's found guilty. They will be in no rush to expel or force Menendez out of office, even if a Democrat wins the New Jersey gubernatorial race, according to several Democratic senators and aides.

“I don’t know if we’d be in a hurry to get rid of Bob,” said a Senate Democrat who is up for reelection in 2018. “It would be a tough vote for folks like me, but I think the rest of the caucus would stick with him.”

That, in a nutshell, is the value of the liberal media’s double-standard on ethics: A Democrat’s corruption scandal is kept under wraps, while a Republican’s alleged transgressions are given saturation coverage.